International students at Ryerson struggling to adapt to Canada felt a little more at home after a screening of Persepolis last week.

Persepolis is a 2007 French-Iranian biographical film, based on the experiences of director and writer Marjane Satrapi as a young Iranian girl. In the film, Marjane is growing up during the Islamic revolution when her parents send her to Vienna for a better life and education.

The film was screened for international students in the POD last week by Ryerson International Student Support (ISS).

After moving to Canada from Iran three months ago, chemical engineering PhD student Maryam Jamshidzadeh felt particularly connected to the story. “It’s difficult to be in a new country,” she said.

“I felt a lot of relevancy to the film,” Jamshidzadeh added. “I’m completely new to this country, like [Marjane], and it’s very difficult.”

ISS is a home away from home for students who are new to Canada. Its main goal is to assist international students as they adjust to life in Canada.

According to a report by Huffington Post, feeling alienated as a result of a culture shock was one of the top four challenges of being an international student in Canada. Signs and symptoms of culture shock include, feeling sad, lonely, and a loss of identity.The report suggests international students to get more socially active by volunteering, and attending local festivals.

The film screening was hosted by Winnie Wu, a lead mentor for international graduate students at Ryerson. During the empowerment discussion after the film, she shared her thoughts on being a newcomer to Canada. 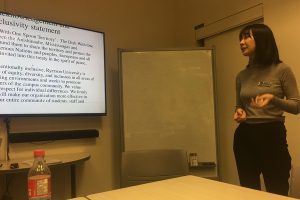 “I am in a very liberated environment today, however being [from China] I can’t let go of my roots because I am still very connected to my home land,” Wu said.

In Persepolis, Marjane lives in Vienna during her adolescent years. When she was asked what ethnicity she is, she would respond that she is French, prompting her peers to laugh at her because she didn’t look French.

Later that day on her walk home, a subconscious projection of her grandmother speaks to her about why she is ashamed of her Iranian background. Marjane learns to regain confidence in her roots, and shouts that she is indeed Iranian.

“I like this [film], because I don’t want to lose anything. I want to preserve my culture,” said an international Ryerson student from Iran, who did not want to be named.

Culture shock was the most common symptom felt among moviegoers.

Ryerson’s ISS believes gathering international students to watch a film fights off the unwillingness to interact with others while encouraging them to make friends.

The Iranian international student says the biggest issue for him is the lack of friends. He says that he has made only one friend, and that the language barrier makes it difficult to communicate at times.

“It’s easy to find an Iranian circle, but it’s hard to learn English this way,” he said. “I’m trying to find new friends.”

He believes being from a foreign country has made it hard to make a lot of friends here.

Helia Nabavian, an ISS mentor for the science faculty said, “friends aren’t about a number, but about quality.”

“I’ve been here since I was three years old, and I only have one friend. So it’s not that you’re from another country, it’s universal,” Nabavian said.

Nabavian encourages international students to make connections and get involved on campus to socialize.

“Even just coming to [the ISS sessions] is great,” she said.

When the session came to an end, conversations side-tracked to comparisons about Tim Hortons coffee and Starbucks.

OPINION: Contract faculty deserve better – and they deserve our support