The political climate, in its current state, has led to extreme polarization, even in journalism that is meant to maintain some semblance of neutrality.

But Colleen Derkatch, associate professor from the department of English at Ryerson University, said there’s “no such thing as a neutral position.” In her talk, Derkatch spoke about the importance of critical writing. 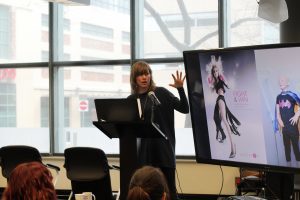 One of her main points was the necessity of “space for reflection” in writing to provide journalists with an opportunity to understand the impact of even the subtle nuances in the stories they write. She said that it is particularly crucial for journalists working under tight deadlines to be aware of the values that are embedded in the words that they use.

“Criticism is a generative act, it’s about taking something apart to understand how it’s put together,” said Derkatch.

On the public’s concern with bias, Derkatch said, “there’s no such thing as objective fact…all texts are perspectival,” though neutrality should ultimately be the goal. Derkatch added, “bias isn’t a good or bad thing, it just is,” in part, due to the language of everyday life that persuades people.

Metaphors, which she calls “insidious,” contribute to persuasive rhetoric because of their cognitive ability to naturalize certain things, such as viewing cancer as a fight to be won. Such naturalization is compelling as a subconscious call to action and allows for the justification of certain ways of thinking based on language.

As journalists, “being alert to the range of effects” of the words used in news reports is what will ultimately allow for better journalism.

In the new Trump era, what privacy does a journalist have?