The Invictus Games first took place in London in 2014 as a demonstration of the strength of soldiers and veterans. Three years later, it’s Toronto’s turn to host the games. More than 500 competitors from 17 countries will compete from Sept. 23-30. 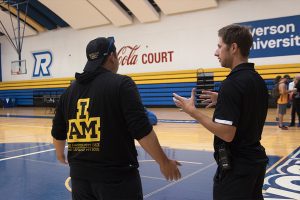 Greg Danko (right), is the National Tour Co-ordinator for this year’s Invictus flag tour. The Invictus Games Opening Ceremony will take place at the Air Canada Centre on Sept. 23 at 7:30 p.m.
(Photo by Julie Faye Germansky) 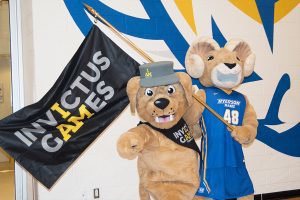 The Invictus tour team brought along their mascot Vimy, who quickly befriended Eggy the Ram. (Photo by Julie Faye Germansky) 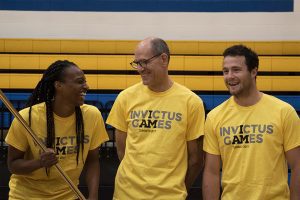 The three flag bearers sported an Invictus 2017 tee. Chris Munro (middle) is a Canadian Armed Forces veteran. He began operating the Bridges to Ryerson program through Ryerson’s Chang School of Continuing Education. The program assists people who want to return to school and has been a successful path for veterans and current members of the Armed Force. Left to right: Tashana McDonald, Chris Munro and Erick DeLaurentis.
(Photo by Julie Faye Germansky) 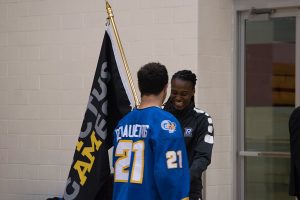 Tashana McDonald, Rams women’s basketball forward, and Erick DeLaurentis, Rams men’s hockey forward, were also flag bearers for the Ryerson stop. During the course of this year’s flag tour, there were 150 flag bearers who participated. (Photo by Julie Faye Germansky) 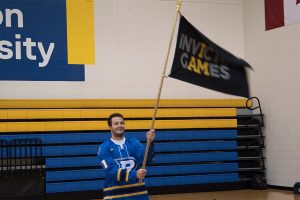 Erick DeLaurentis waved the flag high and proud to kick off the Invictus Games taking place in Toronto. Ryerson was the last stop on the tour before the flag was raised at city hall on Sept. 22. (Photo by Julie Faye Germansky) 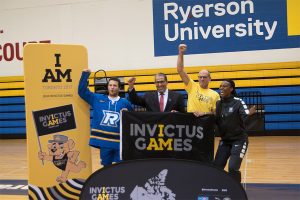 The Invictus flag tour kicked off on Sept. 7 in New Brunswick and has since made its way coast to coast across Canada, making multiple city stops in Nova Scotia, Quebec, British Columbia, Alberta, Saskatchewan and Manitoba. The flag arrived at Ryerson’s Mattamy Athletic Centre (MAC) on Sept. 21. Ryerson president Mohamed Lachemi was present along with Ryerson athletes for the flag handover event. Left to right: Erick DeLaurentis, Mohamed Lachemi, Chris Munro and Tashana McDonald. (Photo by Julie Faye Germansky)