The federal government is looking to change Canada’s first-past-the-post voting system, and young people are anything but apathetic. Thursday’s youth town hall at the Student Learning Centre welcomed students from different schools and programs to discuss electoral reform.

The Ryersonian caught up with some of the participants to ask: What’s wrong with first-past-the-post? 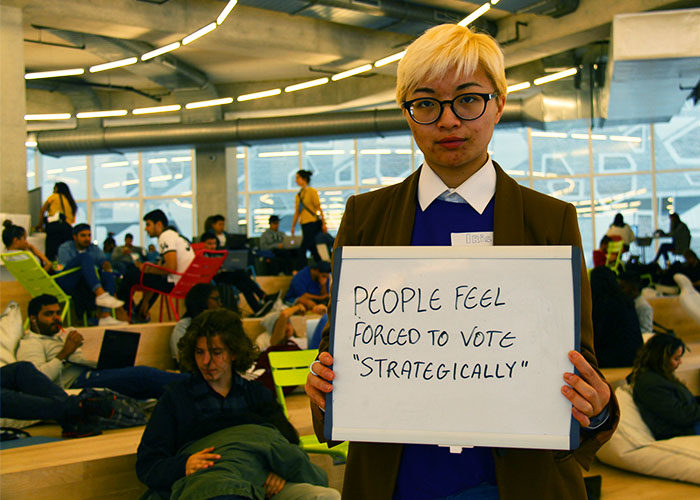 “I don’t think that the system should influence the way that people vote. The system that we have makes people feel they can’t vote for the candidate they support because they’re afraid of another candidate taking their space. So they choose to vote for their second choice.” 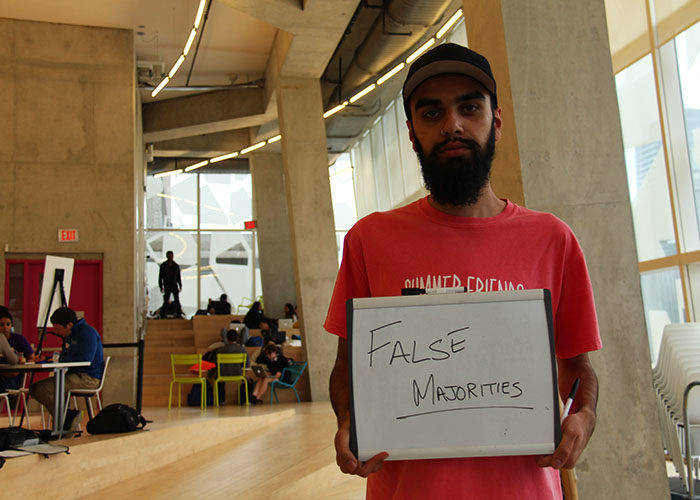 “I think that the current first-past-the-post system creates a system in which somebody can get 30 per cent of the popular vote, and 100 per cent of the power. I think oftentimes, that leads to political parties being able to push an agenda that most of the country doesn’t agree with. That needs to change. If we don’t have false majorities, we will have a multi-party system.” 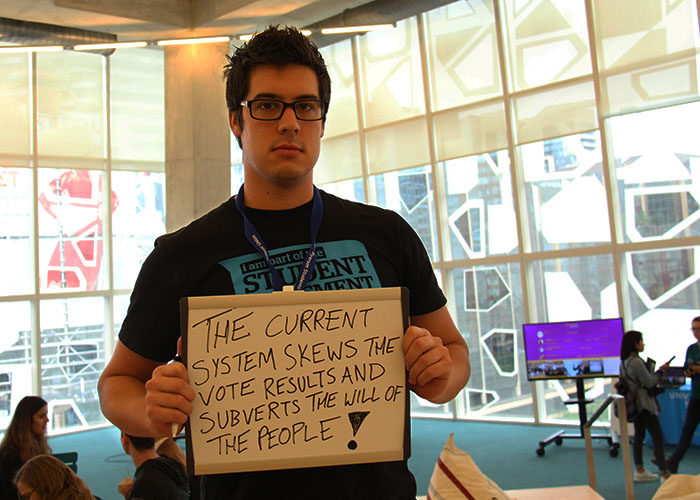 “The current system skews the vote results and subverts the will of the people. Governments are formed sometimes, as with the last election, [with] less than 40 per cent of the electorate voting for them. Small parties lose votes consistently, which doesn’t allow them to grow, and keeps them small, in a never ending cycle of self-fulfilling prophecy.” 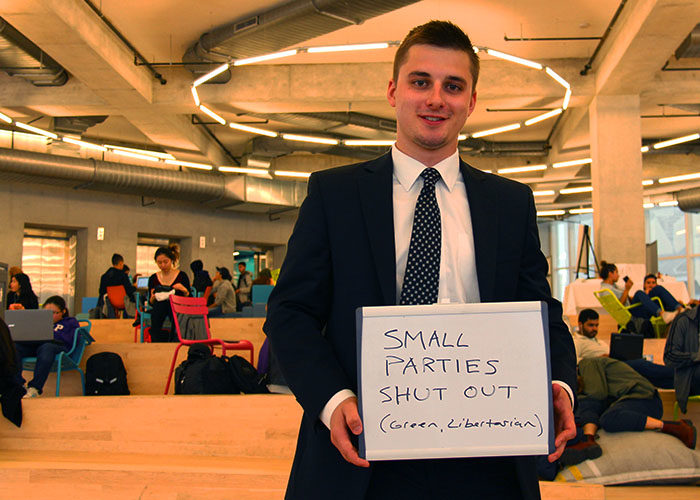 “Small parties are shut out, small parties do not have equal representation for the amount of votes they have, depending on the riding. If we were to change it, the worst change we could make would be towards a preferential system, which would continually shut out small parties, to even a greater extent than they are today. If any changes are to be made, it would be towards a proportional system where smaller parties have more of a voice and instead of a preferential system, which would give the leading party—in this case the Liberals—a super majority, on top of what they already have.” 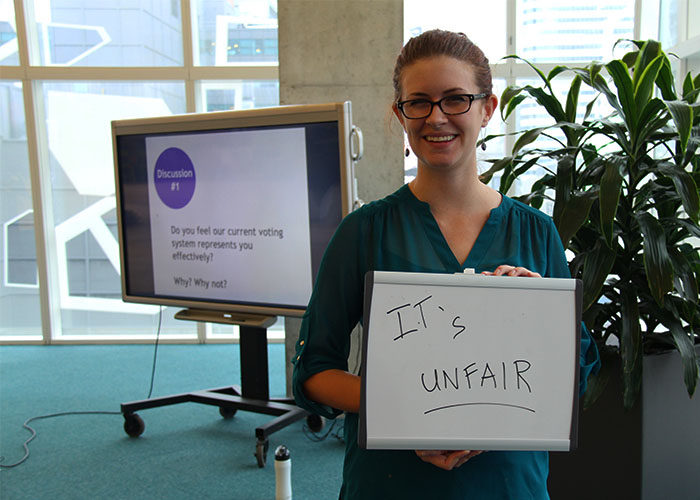 “Currently, the way that first-past-the-post works, it distorts the results at the federal level, in such a way that the percentage of popular votes that a party wins is not reflected in the seats they get in the House. So you’ll see parties that win 39 per cent of the vote, and get 52 per cent of the seats. That has tremendous impact on policy because it means that some parties can get 100 per cent of the power with less than half of the vote. It also wastes votes. In the last election, about nine million people cast votes for candidates that didn’t win. That’s about half of the people that vote. That’s tremendously unfair.” 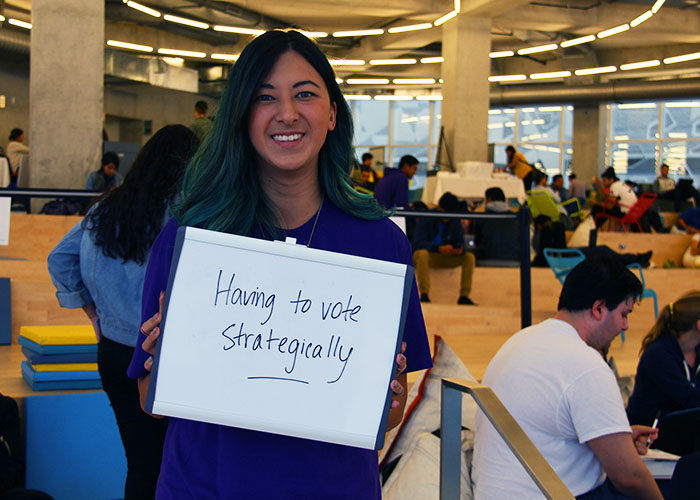 “People have to vote strategically, instead of voting for the person that they actually believe would represent their riding the best. Whether they’re Conservative, Liberal, NDP, or independent party, it’s really disappointing to see people voting specifically for one party—not because they believe in what that party wants, but because they just don’t want someone else to get elected.”

Rajean Hoilett, chairperson of the Canadian Federation of Students – Ontario 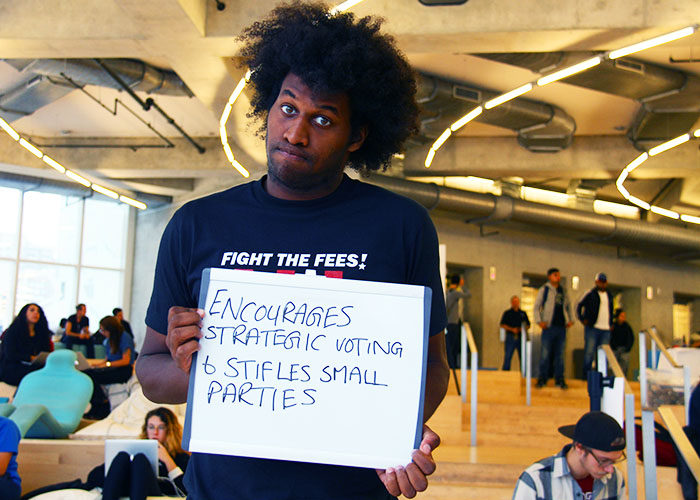 “The first-past-the-post system really encourages people to vote strategically to ensure that the candidate they don’t want to get in power, doesn’t get in power, and doesn’t actually encourage people to vote based on their principle and their values, and who they would actually like to see reflecting them in government. That also really limits the abilities of smaller parties to organize and to be able to build capacity.” 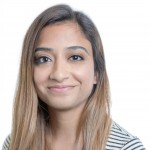 New provincial pilot will test the value of your education