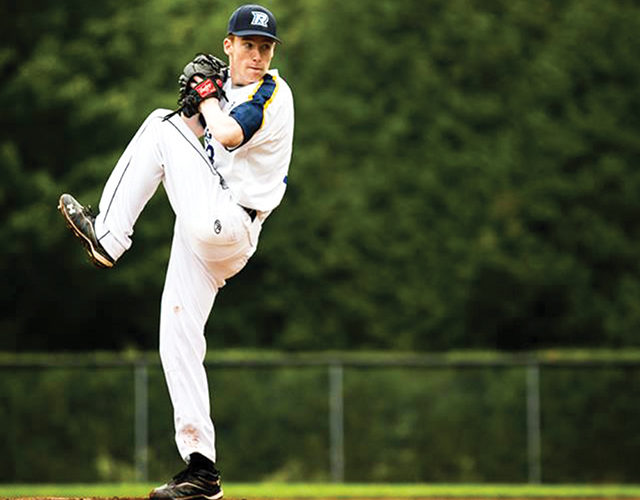 Our season-ending banquet marked the first time in a month where we were all together again. And was it ever great to see the guys. After all, I spent nearly every day on the baseball field for six gruelling weeks this fall with this ragtag bunch.

The dust had finally settled on our inaugural Ontario University Athletics (OUA) baseball season, one that started with great optimism and ended in disappointment, with more than our fair share of growing pains mixed in for good measure.

Here we were, packing the upstairs at the Vic Pub, feasting on free chicken wings and deep-fried macaroni balls, finally with a chance to reminisce and remember the good times and lessons learned from the first year of Ryerson Rams baseball — a season that ended with only three wins and 19 losses.

The season started with so much potential on a beautiful, balmy Friday evening in early September at Talbot Park — a quirky ballpark with no fence in right field and a 10-metre-high monster in left — for our season opener versus the Guelph Gryphons.

On that night, we looked to use all of its quirks and the partisan crowd of over 200 Ryerson fans to our advantage. There was a discernible buzz during the game, and rightfully so.
Bryan Vardzel, our starting pitcher, had one of the best games I’d ever seen, going seven strong innings to neutralize Guelph’s big bats, and giving us a chance to squeak across the eventual winning run on a bases-loaded walk in the bottom of the eighth.

I remember warming up in the bullpen in the ninth in case I was needed to close out the game. The intensity of the moment caused my stomach to churn — a combination of nerves and excitement. I never did get into the game. Teammate Lucas Crichton closed it out but it remains one of the most competitive and thrilling games I’ve ever been a part of.

After the 4-3 win, our head coach, Ben Rich, was getting ready to address the team when fellow teammate Keith Capstick screamed, “that was fucking awesome!” at the top of his lungs.

It was the best start imaginable. We felt like we had established ourselves as legitimate contenders in the OUA.

We had arrived, or so we thought. The winning result on opening night proved to be an anomaly.

Over our next 21 games, we managed to win just twice, finishing the season 16 games below .500 — dead last in the OUA. Like many first-year teams, it wasn’t just one or two things that went wrong.

For starters — pitching, that is — we lacked depth and experience.

We had trouble avoiding the “big inning,” where opponents would feast on untimely errors and mental miscues that would cost us a chance to win games which were otherwise closely contested.

While we never lost our composure, frustrations grew. The low point came on a miserable Sunday afternoon in Waterloo at about the halfway mark of our season.

We lost both games of a double-header to the Warriors by a combined score of 19-6.

Afterwards, coach Rich had enough. He sent us to run “poles” — baseball’s equivalent of laps, running from one foul pole to the other — and we did, for what felt like an eternity. We pounded our cleats on the muddy warning track for 30 minutes until the coaches finally put us out of our misery. It was awful, compounded by the fact we had just lost our fifth and sixth games in a row and our shot at a playoff spot was gone.

It would have been easy to throw in the towel at that point, but we held it together and played hard down the stretch. We were able to finish on a bit of a high note, taking the last game of our final weekend series against Brock, arguably the league’s best team.

There were other positives too, such as the .373 batting average of our third baseman and team leader Josh Lund — good for fourth in the OUA. He earned the Rams’ offensive player of the year and the most dedicated award.

After that memorable opening night, Vardzel proved to be a horse on the hill for us all season long. He pitched 47.2 innings —second most in the OUA — which was more than enough for him to take home pitcher of the year honours.

The defence of centre-fielder Jason Te and second baseman Julio Ramirez was also a high point, earning them co-defensive players of the year.

Our team has talent, there’s no question about that. It’s just a matter of us getting used to playing with each other and winning those close games.

During the speeches at our closing banquet, assistant coach Blake Enzel said it best when he told our group there would be no more room for excuses heading into year 2.

And he’s right. The game of baseball is supposed to be fun; that’s why it’s a game. But there is nothing more fun than winning and being competitive.

The task is at hand. We have nine months to work our butts off, improve and, perhaps more importantly, grow as a team.

We will be better next season. We have to be.

After all, there’s nowhere to go in the standings but up.

Close to cracking the CIS top 10