Ryerson President Sheldon Levy is promising a “great solution” to the botched paint job on Gould and Victoria streets, but it’s not clear who will repair the peeling design.

“I can promise you that we’re not going to pay for second-standard jobs,” Levy said. “Now, more than that I can’t say, because we’re obviously going to have to resolve this with the company.”

The project was contracted out to Toronto landscape architect firm Elias + Associates, which then sub-contracted out the application of the paint. The design firm declined to comment when contacted for an interview.

On Jan. 6, Julia Hanigsberg, vice-president of administration and finance, used her blog to apologize to students, admitting that the project was rushed and that the epoxy paint was insufficiently tested.

“The blame is really ours to take that we rushed the job, we didn’t require the work to be done that would have made the execution effective. And so that’s blame that I’m taking on. I’m not pushing that on to any contractor,” Hanigsberg said later in an interview.

It’s not known if the repairs will add to the cost, and who would pay.

Despite Levy and Hanigsberg accepting blame for the unsuccessful job, Levy maintains that the company is obligated to ensure the work is completed properly.

“Because their contract said that they could do it, and a great job, and they didn’t. I could point a lot of fingers but they could probably point them at me too,” said Levy.

He won’t promise that the same company will be back at Ryerson resolving the job.

“(Ryerson’s) going to be in a dispute and contractual (obligations) so I’m not going to make a commitment that way,” he said.

Ryerson first spent $25,000 to have the streets painted last summer to cover up the construction-damaged surface and then a second time with a specific design when the first application started to chip. After spending more than $170,000 on the second coat of paint, Ryerson’s streets are left flaking, and the university has indicated it might scrap the paint job altogether.

Hanigsberg said that redoing the street with the same design is just one option.

“My vision for the future is that we have beautiful new paving treatment that takes us from Yonge right through to Mutual Street…what we ought to do in the interim is the question,” said Hanigsberg, adding that the paint was always meant to be a temporary measure until the university could do a proper pedestrian road.

Last fall, Hanigsberg told The Ryersonian that the new paint was the same as that used on New York City’s Times Square and would not erode as quickly.

The paint job has generated its fair share of disgruntled students.

“It was probably the worst decision that Ryerson could have made because, even though the paint is coming off, it still was not a good design,” said Nicole Maxwell, a fashion design student.

“Stop calling me for donations if this is how the money is going to be spent,” one reader, who signed off as “Proud Alumni,” commented on Hanigsberg’s blog post.

But not everyone was entirely negative towards the project, intended to boost the campus image.

“While it’s unfortunate the execution didn’t go as well as hoped, I personally think it was a great idea. The colour added vibrancy and contributes to a growing sense of an actual Ryerson campus in the downtown core,” another reader, Laurie Stewart, commented on the blog post.

According to Hanigsberg, the combined price for both projects was less than one per cent of the annual improvements budget, and she said that so far they have only handed over half the cost of the project. 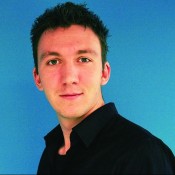 MBA students are closing in on million-dollar prize