Zaynab Dhalla, Kevan Davidson, Kate Collins, Archie Santos and Cassandra Myers will be competing at the North American finals in April at Temple University in Philadelphia, Pennsylvania. Ryerson will be one of 72 teams expected to participate this year.

Myers, co-president of Poetic Exchange and coach for the finalists at CUPSI, believes the best way to perform in a slam is to be honest with yourself.

“There are so many places to draw from within yourself to tell really nuanced and intricate narratives,” she said.

Myers started on the BAM! Youth Slam in her first year at Ryerson. She was driven to one day compete in the U.S. and found her way on the Poetic Exchange team. Poetic Exchange has been organizing slams on campus since 2014.

It’s also where she met the other Poetic Exchange co-president, Twoey Gray.

Gray has been a part of the poetry community for four years in Toronto. She is happy slam poetry has become more mainstream.

“Spoken word is a very unique art form in that it combines a lot of elements of different art forms,”said Gray, referring to music, traditional spoken word, stand-up comedy and performance art.

Gray anticipates new pieces at the finals, and hopes people experiment with their voice and presentation.

“It’s really important to try and keep advancing the medium and keep pushing boundaries and not pigeonholing yourself as a slam poet,” she said. “The most amazing artists to me are the people who tell a story the way no one else could.”

Gray believes that using slam poetry to bring personal anecdotes in a politicized tone is a perfect way to bring awareness about social justice internationally.

“Where else do you get the opportunity to stand up in front of people for three minutes, and they have to listen to you?”

It is common for poets to change their mind on what to present minutes before they’re asked to perform. Both Myers and Grey both admit to re-writing their poem right before performing. 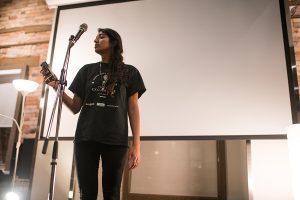 Cassandra Myers is the co-president of Poetic Exchange. (Photo by Natasha Hermann)

“People are going up there and sharing something that’s very close to their heart,” Gray said. “There’s a very one-on-one element.”

Some regular performers, however, were not entirely prepared for finals on Wednesday.

Robert Molloy, a politics student at Ryerson, has been so busy with school work that he planned to practice on the day of his finals. His poems are mostly centred around gender, sexuality and mental health. Molloy said both his poems for finals are LGBTQ related.

Molloy said his poetic inspiration comes at the most unusual times. While leaving class one day, he overheard a classmate say “I’m waiting for my biological clock to start ticking” and that one line resulted in a poem he calls “Maternal Instinct.”

Molloy now uses poetry skills at his freelance job at CANVAS, an LGBTQ organization that works with youth in the community.

“I do it a couple times a month, and it’s like my favourite job,” said Molloy. “If someone said, ‘You can do poetry for the rest of your life,’ I’d be like, ‘Let’s go,’ no questions asked.”

Molloy started watching and enjoying poetry slams in high school and participated in his first competition through Poetic Exchange.

He has been apart of Poetic Exchange since his first year at Ryerson and immediately felt like a part of the community. He was offered the opportunity to join his fellow poets at the CUPSI competition last year and said it was great to sit in the audience and experience the tournament.

“It was like six days of crying. It was a lot of really intense poems,” said Molloy. He is happy that he has a sense of what CUPSI is like, so he can better prepare for this year’s competition.

Last year, Poetic Exchange placed in the top 30, but didn’t make it to semifinals. 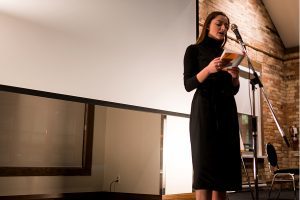 Kate Collins, who is a student in architecture at Ryerson, will slam again at CUPSI this year. (Photo by Natasha Hermann)

Kate Collins, an architecture student at Ryerson, was part of the RU crew that participated in CUPSI last year and she’ll attend again this year.

“It’s like instant friends,” she said of the exposure to fellow poets. “You talk about the worst parts of yourself… and these people support you anyways.”

Collins had experience practicing poetry in high school, but spoke at her first slam at Ryerson. She won the first slam she competed in.

“That was a big moment — like the recognition that anyone can do it, and I can do it,”

Slam poetry sessions try to get the audience involved in the poetry. The hosts encourage the audience to snap, stomp and yell. The finals were no exception. The energy was thick, and no one could hold back their enthusiasm.

Molloy said the first time he was performing at a Poetic Exchange slam it freaked him out. He is bringing new friends to the competition.

“I’ve been warning them in advance — it’s going to be really intense. We do a lot of yelling,” he said.

One of the hosts is Andrea Josic, a second-year journalism student at Ryerson. She got involved at Poetic Exchange during frosh week and is now on the executive team.

“I always liked being on stage, but something about hosting it is a bit more appealing to me,” she said.

She also enjoys performing on stage, but relates to those who feel nervous.

“You’re pouring your heart out and tears are coming to your eyes. You’re angry, you’re sad and you’re going through all these emotions and showing that in front a crowd. That’s really scary, but it’s also rewarding at the same time,” said Josic.

“There’s a love-hate relationship that I have with it.”

Josic believes that poets should draw from personal experience to deliver a good poem.

“I look at what’s hurt me, made me angry and sad, and try to put that all out on paper.”