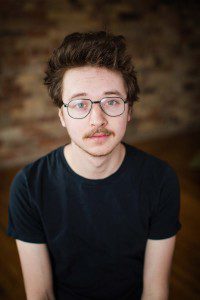 “It was Halloween, I was at the dollar store buying something last minute for my costume and I was standing in line at the checkout and this tall man, dressed in all leather with long hair whispered something to the guy behind the counter. After that, the guy behind the counter left and went into an aisle, he came back out 30 seconds later and he’s got a huge fishing net and goes, ‘I got it!!’ and the guy in leather goes,  ‘No, no… I said fish net tights.’”

Gavin Pounds is a funny guy. The 23-year-old radio and television arts graduate told me this story after I asked him, “Gavin, what makes you laugh?”

Segway tour guide by day and comedic entrepreneur by night, if Pounds isn’t too busy laughing at the naivety of teenagers he’s most likely practicing for his performance at this year’s Toronto Sketch Comedy Festival.

Founded 10 years ago by a group of Toronto comedians, Sketch Fest, which runs from March 3 -13 this year, features what some may call the best live and scripted comedy in North America. Pounds’ sketch group, who he met through The Second City, call themselves “Dame Judy Dench”. The four-person team has been working together for a while now, “we’re not even rookies anymore, it’s cool.”

Through competitive speaking in grade school, Pounds grew fond of performing in front of a live audience, particularly, making people laugh. “Being able to make someone laugh is a universal sign that they like you.”

Although Pounds finds himself performing sketch and stand-up comedy a lot, his favourite medium is improv.

“I think why I like it so much is because the audience is on the exact same wavelength as the performer,” he says. “Everyone is going through the same thing, and when the performer gets something thrown at them, you as the audience member get to see what they decide to do.”

Improv is one of the most difficult and authentic forms of comedy, as unplanned things and humour happen on stage that you may not have seen before. Akin to this, Pounds is a fan of “weird” and “alternative” comedy, names like Nathan Fielder and Kyle Mooney – people who do things differently.

“I love enormous misdirection in comedy – stuff that happens very out of left field, for no reason at all. I guess I like that a lot because… that’s who I am.”

A nine-to-five day scares millennials away