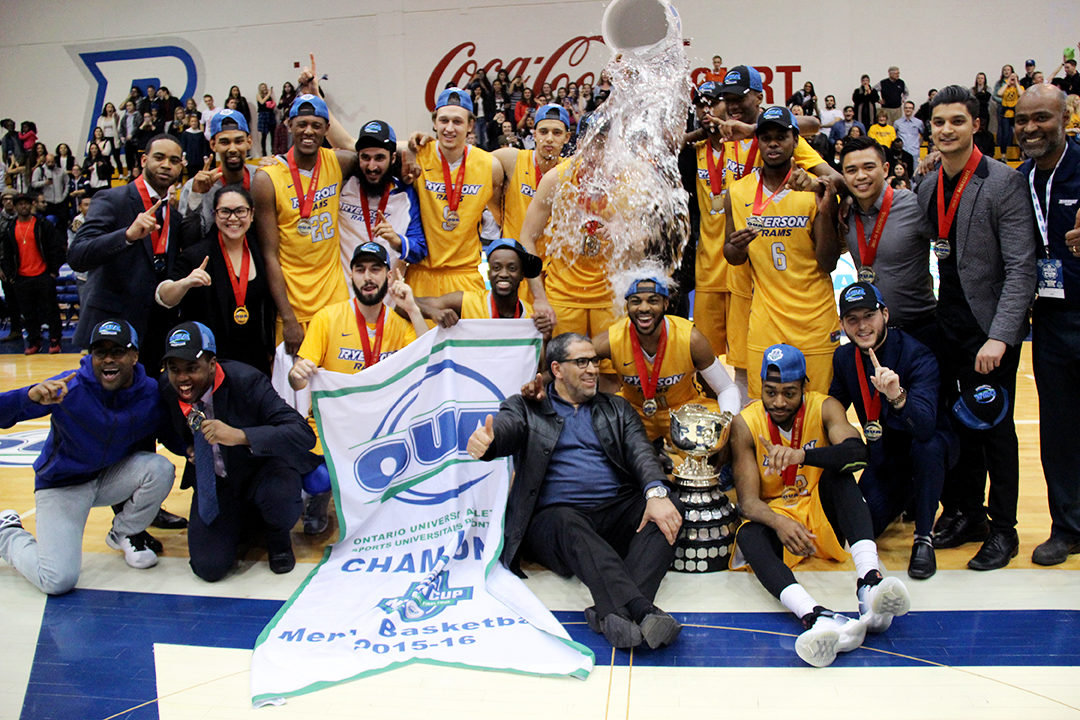 The Rams at centre court at the Mattamy Athletic Centre in Toronto after their first OUA championship win on March 12, 2016. They beat Carleton University 73-68. (Photo credit Bryan Meler/Ryersonian staff)

VANCOUVER – With an OUA gold medal under the belt, the Ryerson men’s basketball team is looking to do more damage – this time on a national level.

With the win, the Rams qualified for the Canadian Interuniversity Sport (CIS) national championships in Vancouver at the University of British Columbia (UBC), and they have been seeded as the No. 1 team in the tournament for the first time in the program’s history.

Yet, the Rams face a tough first game against the tournament host and to win the championship they will likely have to beat provincial rivals Carleton who have won the tournament every year since the 2001-2002 season except twice. And what’s more – most expect the Ravens to repeat again.

The Ryersonian polled 15 coaches across the CIS about their picks for CIS gold. While two favoured Ryerson, Carleton was the tournament favourite for nine of them.

“I think there is more parity than in many of the past years, with three to four teams having a true shot at winning it all,” said Marc Dobell, head coach of Mount Royal University’s men’s basketball program.

“If I had to pick, I would pick Carleton University,” he said.  “I see them as the champions until someone knocks them off. They have the experience of being there time and again, and winning.”

Recently, the top talent in men’s basketball at the CIS is in the OUA. At last year’s national tournament hosted at the Mattamy Athletic Centre the top three medals were all awarded to Carleton, Ottawa and Ryerson in that order.

With all three teams participating again at this year’s tournament, coaches across the nation agree they are the top three teams, and could very well repeat as the gold, silver and bronze medalists.

What may separate the Rams

Looking at the Rams, what may separate them is versatility. Most teams rely on one specific player or one style of play. For example, some teams focus heavily on moving the ball around quickly and shooting three pointers. Other teams choose to give the ball to their biggest player and hope he can dominate around the basket. The Rams can do both.

Guards Adika Peter-McNeilly and Aaron Best can each shoot the three and drive to the basket. Along with those two, Jean-Victor (JV) Mukama is a threat with his ability to shoot the three-point shot while towering over his defenders at six-feet-eight-inches tall.

While Peter-McNeilly, Best and Mukama could lead the team in scoring over the weekend, maybe the biggest threat is centre Kadeem Green.

Standing at six feet nine inches, Green is also built like a football player. His strength and athleticism in the low post are overpowering on both offence and defense.

Green has been a towering part of the Rams’ success and he may be this weekend too.

The tournament kicks off for the Rams on Thursday, March 17 at 11:00 p.m. eastern standard time (EST), where they will be squaring up against the host UBC Thunderbirds.

The tournament runs March 17-20. Stay up-to-date on how the Rams do by following The Ryersonian’s live blog. https://ryersonian.ca/live-blog-mens-cis-basketball-championships-game-1/