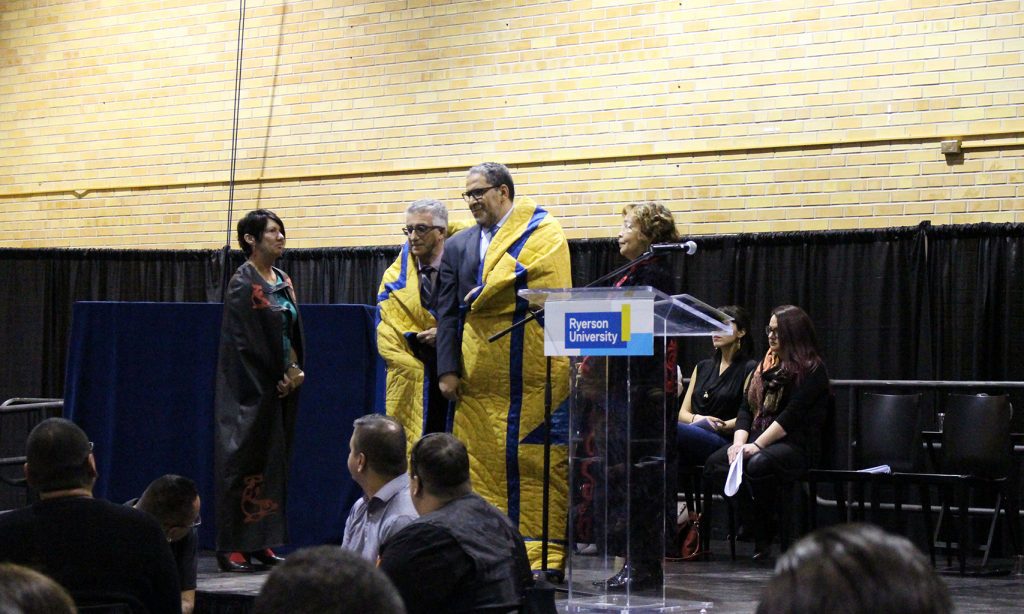 The university will keep the controversial Egerton Ryerson statue on Gould Street, but it’s soon to be accompanied by a plaque criticizing the man after whom the school is named.

Ryerson unveiled the sign Friday, the same day it released a report containing suggestions from students, staff and faculty on how to address indigenous representation at the university.

The report is an initial response to the calls to action published by the Truth and Reconciliation Commission of Canada.

The plaque, which will be placed at the statue, says in full:

“The plaque serves as a reminder of Ryerson University’s commitment to moving forward in the spirit of truth and reconciliation. Egerton Ryerson is widely known for his contributions to Ontario’s public educational system. As Chief Superintendent of Education, Ryerson’s recommendations were instrumental in the design and implementation of the Indian Residential School System.

“In 2015, the Truth and Reconciliation Commission reported that children in the schools were subjected to unthinkable abuse and neglect, to medical experimentation, punishment for the practice of cultures or languages and death. The aim of the Residential School System was cultural genocide.”

It concludes with two quotes: “Let us put our minds together to see what kind of lives we can create for our children.’’ – Chief Sitting Bull.

“For the child taken, for the parent left behind.’’ – Truth and Reconciliation Commission of Canada.

The event on Friday to mark the release of the report was attended by more than 100 people and included songs with hand drumming, music on a thundering big drum and a feast.

In his speech, Ryerson president Mohamed Lachemi said “Ryerson has what it takes to make a difference” when it comes to educating more Indigenous learners. “I cannot think of a more powerful call to action for Ryerson University.” 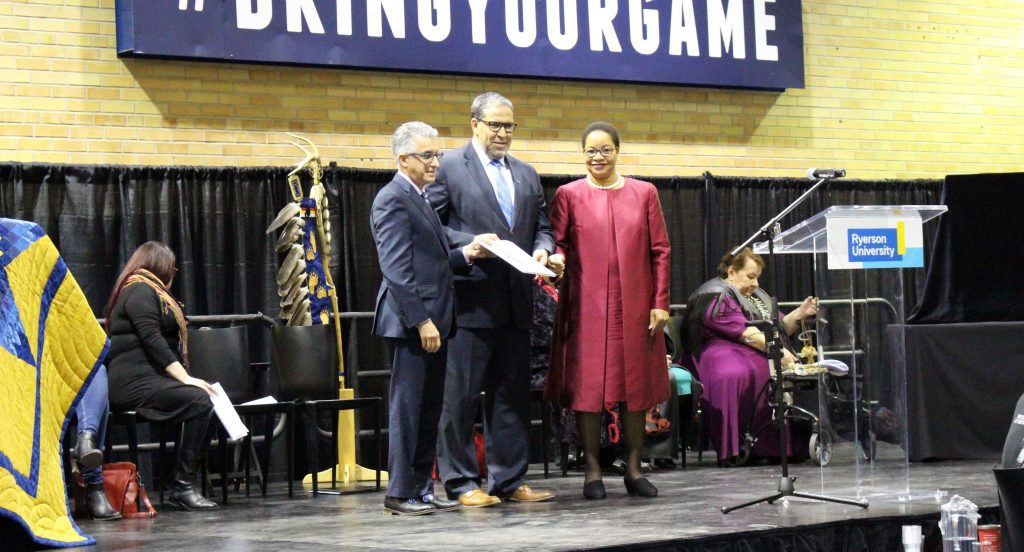 Monica McKay, the director of Aboriginal initiatives, wrapped president Lachemi and the provost together in Ryerson’s star blanket to “signal that you accept the responsibility to receive and respond to Ryerson’s Truth and Reconciliation report,” she said. “Furthermore, that you will identify how this work will be accomplished.”

Provost Michael Benarroch said Ryerson will release targets for its goals based on the new report. The school will release an initial report from an in-house working group over the summer.

“When the strategic report comes out this summer, that is where we’ll begin to say what kind of targets we’re moving towards,” said Denise O’Neil Green, the vice -president of equity and community inclusion, who authored the consultation report.

In Ontario, Indigenous people make up 2.4 per cent of the population and one per cent of Greater Toronto Area residents, according to 2016 Statistics Canada data. The school said Ryerson will soon release a second report with numbers from 2015 and 2016.

The new report, titled Truth and Reconciliation at Ryerson University, contains a pledge to double the number of Indigenous faculty at Ryerson.

It also proposes 50 recommendations for the school to implement, based on the theme of “Indigenizing Ryerson,” which includes changing or expanding support for Indigenous learners, Indigenizing teaching and learning practices, increasing Indigenous staff and faculty, deepening community engagement, increasing “the Indigenous visibility” at Ryerson and honouring Indigenous history and cultures.

It also asks for specific improvements such as: advisory committees for Indigenous representation, cultural education among staff and faculty, more daycare areas, an Indigenous-only space, more Indigenous librarians, the relocation of the Aboriginal student services to the Student Learning Centre and Indigenous learner support.

In terms of teaching and staffing, the report says Ryerson should: increase representation in a “culturally responsible and respectful curriculum;” “provide training courses for instructors on how to utilize Indigenous resources in their program and courses;” give workshops for journalism students; establish “Indigenous studies and governance degrees;” and train for hiring accountability.

The report’s suggestions for other improvements to education include: support inviting Indigenous guests speakers, creation of an Indigenous research portal on the topic of Truth and Reconciliation for the library website and to “establish a certificate and minor specifically targeted to educating public servants on the history of Aboriginal People.”

For engagement and visibility, the report asks for policy that: recognizes Indigenous religious and ceremonial holidays, matches Indigenous salaries to other staff, designates an annual Indigenous history week and has “at least one pow-wow on campus a year.”

Danielle Sinclair, a social work graduate from Ryerson who helped put the request for a plaque in the report, also gave a speech saying she hoped the sign causes the school “to seek and identify the way that this institution is complicit in ongoing colonial violence, and (to have) the commitment to act on those findings.”

There is no reconciliation until those who are silenced have a safe space to share their voice, she said.Sinclair said she wanted to come to the ceremony to seek accountability from the administration.

Following the event, she said that having the plaque does not rule out removing the statue. “I think the students want to see the statue gone,” she said.

Phyllis McKenna, vice-president of equity and campaigns, said she hopes there will be a more open channel with Ryerson’s administration.

“When we brought forth the Colonialism 150 campaign, we had no consultation from the administration for over four months, not even an email back. Those consultations have happened once, but we would like to see them happen more often,” she said. 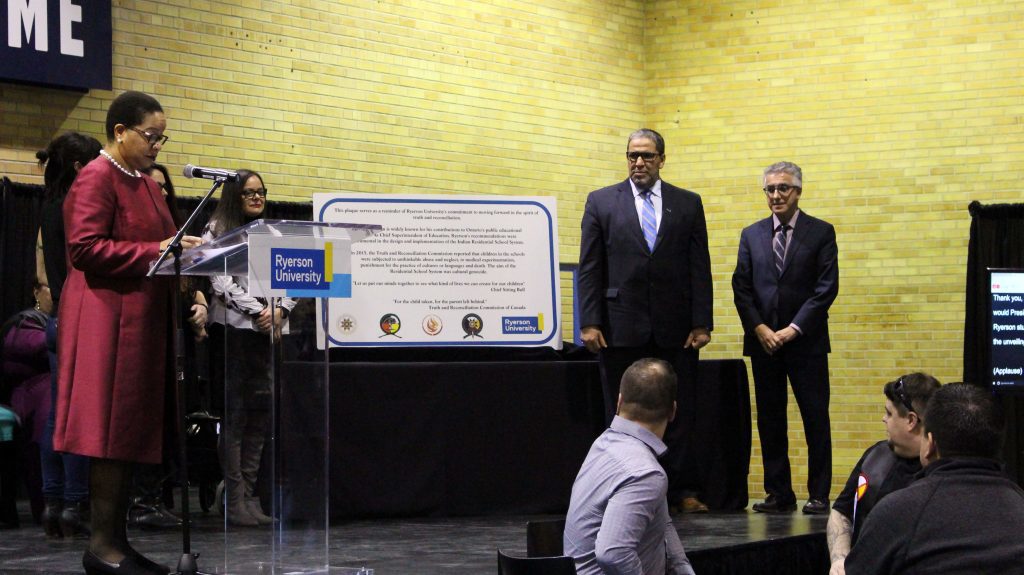 After five months, Ryerson agreed to many of the demands from the the Colonialism 150 campaign, led by the Ryerson Students’ Union, CESAR and the Indigenous Students Association. Ryerson approved demands to create an Indigenous language course, hold an annual pow-wow, educate public servants on the history of Indigenous people and residential schools and fund multi-year research into understanding reconciliation.

“Our future lies within our students. Let’s not forget why we’re here,” she said. “They learn from what we do, not from what we say.”

VOICES: Preparing for granny to die