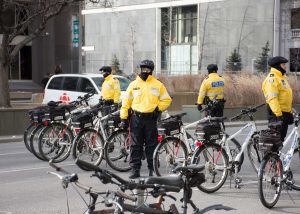 The protest began around 12 p.m. and continued until late-afternoon with people braving the below freezing temperatures to show their support.

It featured speakers from minorities, such as Muslims, Indigenous and Jewish peoples. Speakers condemned the direction Trump’s America has been going, including his Muslim travel ban. 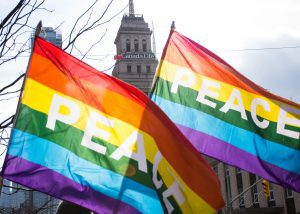 Protesters brought flags and banners from home to the protest in front of the U.S. Consulate on Saturday, Feb. 4th, 2017. (Jaclyn Tansil/Ryersonian)

“No ban! No registry! Fuck white supremacy,” was chanted by the crowd, while they banged on instruments.

The consulate itself was fenced off with a metal barricade. Mounted police, armored vehicles and security remained behind the barrier and also stationed on the roof of the consulate to monitor crowds. 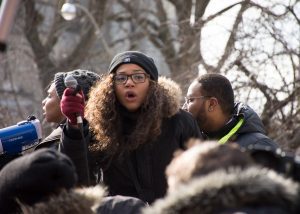 Alexandria Williams, co-founder of Black Lives Matter Toronto was one of the speakers at the protest in front of the U.S. Consulate on University Ave. on Saturday Feb. 4, 2017. (Jaclyn Tansil/Ryersonian)

Ryerson University was called out and condemned for being racist by Alexandria Williams, a co-founder of Black Lives Matter Toronto.

Gilary Massa, a black Muslim who was laid off from her position as executive director of communications and outreach at the Ryerson Students’ Union (RSU) while on maternity leave was also in attendance and gave a speech. 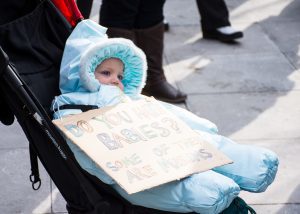 Families went out with their kids to protest in front of the U.S. Consulate on Saturday Feb. 4th, 2017. (Jaclyn Tansil/Ryersonian)

There were demands for action to be taken the Canadian government from federal to municipal levels, naming politicians including Prime Minister Justin Trudeau and Toronto Mayor John Tory.

The organizers of the protest mentioned on the events Facebook page and at the protest, the demands asking for the repeal of the Zero Tolerance for Barbaric Cultural Practices Act, a law passed in 2015 to end honour killings and polygamy as well as protesting Bill C-51. 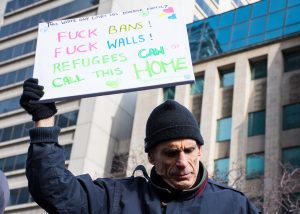 Man holding sign at the National Days of Protest outside of the U.S. Toronto General Consulate on Saturday Feb. 4, 2017. (Jaclyn Tansil/Ryersonian)

There was also demand to repeal the 2004 Canada-U.S. Safe Third Country agreement, which causes issues for refugees to seek asylum in Canada if they have come through the U.S.

Speakers deemed them as laws that excluded minorities and targeted certain peoples. 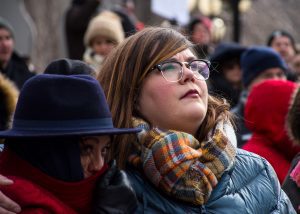 A lady hugs her friend close as she cries during prayers at the protest against Islamophobia and White Supremacy in front of the U.S. Consulate in Toronto on University Ave. (Jaclyn Tansil/ Ryersonian)

Comparisons between government policies and Trump to the Holocaust, were also made during the speeches, while chants of, “never again,” could be heard throughout the crowd. 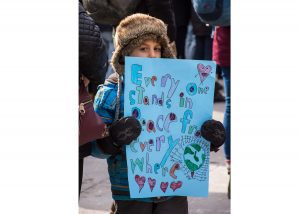 Kids holds sign at the National Day of Protest outside the U.S. General Consulate of Toronto on Saturday Feb. 4, 2017. (Jaclyn Tansil/Ryersonian)

Trump supporters, anti-Muslims and neo-Nazi’s were also present during the march, clashing with protesters chanting, “shame, shame, shame,” during speeches.

RADmag looks to put print back on the map