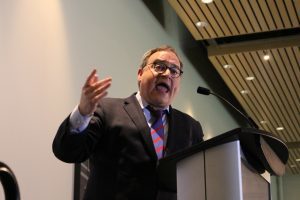 This version adds quotes from Ezra Levant and the fact that Rajean Hoilett is also a former president of the Ryerson Students’ Union.

As Ezra Levant, publisher of The Rebel Media, answered a question at his Campus Culture and Israel & the Middle East event at the Mattamy Athletic Centre (MAC), chanting broke out.

“No Islamophobia, no white supremacy,” said a group of protesters at the back of the room.

“Don’t shut down a Jew,” said Levant as he jumped off the podium. As Levant moved towards them, security wedged themselves between Levant and the protesters. Eventually, the group was removed.

The talk, with at least 50 people in attendance, was hosted by two student groups — the Ryerson Campus Conservatives and Students Supporting Israel.

Marshall John Darbyshire, vice-president of communications for the campus conservatives, said the club wanted to hold the event because Levant is “a symbol for free speech.”

Levant’s speech touched on the blowback conservatives have faced on campuses, the relationship between Canada and Israel, and free speech.

Before the event started, a group of Ryerson students gathered outside with signs, whistles and sirens to protest the event.

Levant acknowledged the whistling protesters outside by referring to them as “paid protesters.”

Levant also said that this “anti-semitism has been normalized.”

One of the protesters, Rajean Hoilett, a social work student and former president of the Ryerson Students’ Union, said he thought it was important to come out and protest Levant’s event.

As the Ryersonian previously reported, attendees needed to be students and register for tickets. Bags were also not allowed.

The event was originally scheduled to take place at the George Vari Engineering and Computing Centre but was moved to the MAC due to security concerns.

“Unfortunately, we were kept somewhat in the dark. Ryerson didn’t give us all the details; apparently they felt that this was a better venue for security reasons. I couldn’t say why but that’s all we know,” said Darbyshire.

“Despite the people outside, [the event] was great. I always feel like these events are needed at Ryerson because we don’t have this discourse happening. It gives students more confidence in the ability to say, ‘Hey at least there’s a place that I could go to listen to somebody else talk and voice my own opinion,’” said Hafizi.

Darbyshire said he hopes that there is a non-partisan shift on campus.

“I understand that there are security concerns; it’s unfortunate. That’s not our fault, that’s on [the protesters]. I would like to see more support, there’s nothing that we can do as far as I can tell in that regard,” said Darbyshire.

The Ryersonian should have noted that Mr. Hoilett is a former RSU president and employee of the Canadian Federation of Students, and not simply “social work student.”