Amanda Joy and Samantha Wan first met each other on the set of a horror film in 2014. Two years later, they’re starring on a TV show they’ve written and created. Second Jen, which airs on City, explores the cultural and generational gaps that most children of immigrant parents experience.

Joy is an actor, screenwriter, producer and comedian. She studied contemporary studies at Ryerson and was a member of the Oakham Campus Theatre (now called Ryerson Community Theatre). During her time at Ryerson, she was also a recipient of the Dean’s Essay prize.

Second Jen follows the lives of two second-generation millennials who try to live on their own. As they navigate their lives, they have to deal with their overbearing Asian immigrant families, who think they know what’s best for them.

The Ryersonian spoke with Joy via e-mail about the creation of Second Jen and diversity in the media.

Q: Why did you decide to create Second Jen?

A: Sam and I were dissatisfied with the kinds of roles we were going out for and wanted to create work for ourselves. As the project evolved, it became so much more – representing our families, communities, and even influencing the industry. For me especially, voicing issues of the young working class was very important as I find this is often either contrived or completely omitted from TV.

Q: How did you pitch the show and what responses did you get?

A: We originally pitched the show for a contest. The judges said that while we were ‘cute,’ no one would want to watch a show about ‘those people.’ As we walked offstage and back to our seats, however, people (mostly young people and people of colour) tugged on our shirts and whispered ‘I’d watch your show.’ Personally, I think that’s what helped me persevere even when times were tough and it seemed like we were dead in the water – angry at the status quo, and a sense of responsibility to those who were not being represented on TV.

Q: What do you want the audience to take away from your show?

A: I hope they laugh, but I also hope that it bridges gaps in understandings between people of different cultures, generations, and incomes.

Q: How did you incorporate your own life experiences into Second Jen?

A: There are too many to name, but one little bit of trivia is that I, like my character Mo, spent many years working at a video game store.

Q:What would you say to people who call your show an Asian TV show?

A: I think because it’s so unusual to see diverse female leads, people instinctively try to find a label like ‘Asian Show.’ We don’t shy away from the fact that our leads are Asian so it’s not entirely inaccurate. I think that it’s good that the community can claim the story as our own. However, it’s an issue when “Asian Show” becomes reductionist. Our show is about two young women, the strength of their friendship, and the ups and downs of navigating the modern world. There are other “Asian shows” about different things (Blood and Water, Fresh off the Boat, Kim’s, etc), so to lump us all in the same “genre” is an unfortunate reinforcement of the media status quo. It says our shows are the same, because anything outside of white-lead TV shows must be categorized by the race of the cast.

Q: How did you deal with issues like stereotypes when you were creating Second Jen?

A: We made a conscious effort to cast people of colour in roles that they wouldn’t typically be in. With this short run, and the time crunch that is shooting in Canada, we weren’t able to explore this as much as we wanted. But I hope if we get more episodes, we can!

On another note, we have an episode that deals with LGBT issues in immigrant families. We made sure to consult with members of the community, and listen to their input on drafts of the teleplay.

Q: Is representation in the media important to you? Why or why not?

A: Representation is important to me, both as a woman of colour working in the entertainment industry, and as a member of the community. TV is an important ideological transcoder, and exposure to different stories, voices, and types of beauty can be one of the most powerful tools for transforming society. Just look at the U.S. election – we are at a point where there really is a conservative backlash against diversity in North America. When people start to see (via accessible media) that everyone is just living their lives, and doing the best they can, it takes away the anxiety of imagination. It helps reduce fear and xenophobia.

Both Sam and I fought very hard for representation in casting. With only six episodes (and a story that’s only starting to take off) we weren’t able to be as subversive as we wanted yet. But I’m proud of the response from those in the boardrooms in approving so many of our choices. Showing people of colour in roles they may not traditionally be seen in is important and so is the desire for change behind closed office doors.

Q: Do you think there is more diversity in Canadian media nowadays, especially for Asians?

A: Yes, and I hope there will be more diversity as we move forward. It can only make our country and our media stronger.

Q: What’s next for you and the show?

A: Right now, Sam and I are really focused on press junkets, and just building up the shows reputation. We don’t have the advertising powerhouse that some of the bigger/American networks have, so we rely a lot on word of mouth. I’m really happy to say that the word on the street is good, and people seem to be finding our show.

As for myself, I’m developing a digital series with Nile Seguin (who plays Allister on Second Jen). I’m also in the final stages of post on a spec-pilot for an office comedy. 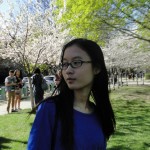 Thanks for interviewing me. I had a wonderful time at Ryerson University, and congratulate anyone who is studying at this amazing institution.

Best of luck in all your studies and endeavours!
AJ