Ryerson players and fans celebrate after the men’s basketball team defeated the Carleton Ravens 73-68 to capture the Wilson Cup, the first OUA championship in school history. This photo, taken on March 12, 2016, was awarded the 2015-2016 OUA Photo of the Year. (Courtesy Alex D’Addese)

Taking pictures has become a vocation for Alex D’Addese. Since the summer of 2014, D’Addese, a third-year sport media student at Ryerson, has been the varsity sports photographer for the Ryerson Rams. Last month, D’Addese shot his 250th Rams event, marking the halfway point to his goal of shooting 500 events. The Ryersonian sat down with D’Addese to talk about overhead pictures, keeping a tight schedule and his legacy.

Ryersonian: When did you start getting into photography?

Alex D’Addese: It all started back when I was around 10 or 11. The earliest memory I have is being up at my uncle’s cottage and there was some digital camera my parents had at the time. I remember just going outside to shoot, shooting the lake, shooting flowers, same kind of thing that most people start out shooting. I remember for the longest time that my parents couldn’t get the camera out of my hand. They’d want to take some pictures but I was always taking pictures.

R: What do you use for the catwalk setup (for overhead pictures)?

AD: It’s a magic clamp, super arm, and there’s a plate to go with it. Basically you screw the plate into the ring mount that’s on the lens – or if you’re not shooting with a ring mount you just screw it into the bottom of the camera. Place it up there, put some safety cables on it, lock it off, put some tape around the focus ring so it doesn’t move and put it on manual focus. It’s a lot of gear hanging up there.

R: When you talk about your schedule, you seemed to have two weeks of events, at least, just in your head, and you can list them off in 30 seconds and know it all. How do you do that?

AD: Because of the fact this is my third year now, I’ve kind of gotten into a rhythm and routine of knowing when games are. I’ve developed this passion to try and make athletics better … and it’s motivated me to go to more games. It’s the age old adage – the more you shoot the better you get. Obviously school is still important to me, but I’ve got to know when certain things are.

R: What do you see when you look at your Ontario University Athletics Photo of the Year picture?

AD: I still get chills. The funny part is that that photo was just pure luck. Earlier in that game I had the camera mounted on the net and I had put it on manual focus and taped it off. The celebration was happening and guys were doing the handshakes and I looked at it and was like, “This is on manual still.”

AD: I don’t like to toot my own horn. I kind of pride myself as being the fly on the wall. I come in, come out, do my work and that’s it. Hopefully I can leave a good legacy here, what it’ll be Lord knows. If people are to remember me, I’d like it to be (remembered) for taking nice pictures obviously, but also as a person who’s approachable, nice and easy to come to. 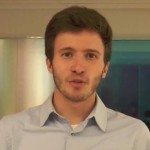