Afghanistan has a hold on Graeme Smith.

The former Globe and Mail war reporter and Ryerson journalism alumnus lived in the country from 2006 to 2009, and returned again years later, driven by what he describes as a curiosity to see how the country would fare after NATO troops withdrew.

His new book, The Dogs Are Eating Them Now, nominated for the Hilary Weston Writers’ Trust Prize for Nonfiction, Smith recounts his years reporting on the war-torn country. The Dogs opens on a haunting note – a simple admission of a broken heart, which reverberates throughout the story and colours a graphic, and at times brutal, narrative with compassion and sensitivity.

Smith will speak at Ryerson on Oct. 1 in the George Vari Engineering Building.

KELSEY ROLFE: You’re nominated for the Weston Prize—and congratulations, by the way. What was your reaction when you heard about the prize?

KR: You’ve worked in Russia and India and Turkey, and now you’ve gone back to Afghanistan. That’s a pretty crazy career. Did you envision that when you left Ryerson?

GS: Oh yeah, I had that all planned out [laughs]. No, I still don’t know what I want to do when I grow up, and I’m still stumbling my way through it. I’ll probably try to stay in Afghanistan for the next two or three years if I can, but it depends a lot on the security situation and factors like that, things that are beyond my control. We’ll see, I don’t know. Certainly when you’re going to Ryerson you’re looking for any kind of job at all, and I was very lucky to get a job, period.

KR: You mentioned the security situation. I got a hint of it at the end of the book, but what’s it like now?

GS: Well, the government is holding the capital and the provincial capitals. Some of the district centres are increasingly isolated, it’s hard for the government to transport the fuel and bullets those districts need. A surprising number of the district centres have not been captured by the Taliban, or at least not that we’ve seen, so the security picture is actually not as bleak as some people expected, having already lost tens of thousands of foreign troops to withdrawals. But we’re all sort of waiting to see, it’s an anxious moment. We are sort of collectively holding our breath. And the sad reality is that more than a decade of war in Afghanistan, as I say in the book, has settled nothing, and that’s tragic that we could spend so much money and lose so many lives without reaching a conclusion. The war will continue without us. We can walk away, but the war is going to continue—it’s escalated this year. It’s up 50 per cent, the violence. And some of my Afghan friends expect the violence to keep rising.

KR: You predicted that the government might continue to hold, as it did after the Russians left in 1989. Do you still hold hope for that?

GS: Yeah. That’s a good point, and it’s an important point, I think. People misread history, they see that the Russians withdrew and then chaos erupted. But if you look a little more closely at history you see that for this period between 1989 when the Soviets withdrew to 1992, the Najib government stood. It endured as long as there were subsidies from outside, and it was only with the collapse of the Soviet Union that the whole thing came apart. Nobody’s predicting the collapse of the Western world, and so it’s possible that the West will keep sending money to Afghanistan, keep sending support and advice and there will maybe be some stay-behind special forces. We’ll see. But there’s definitely a fighting chance that it could hang together.

KR: I think you mentioned they were looking to pull out altogether by 2017 – forces and money. Would that change things?

GS: Well the key problem is the money often follows the troops. We’re concerned about our guys in the field obviously, and so it’s very easy to muster development aid and so forth for a country where we have forces on the ground. And historically in other places when the troops have withdrawn, the aid money and other development assistance has just dried up, and I think it would be a real mistake in Afghanistan to cut them off too abruptly. Obviously at some point, Afghanistan needs to stand on its own feet, but the regime we’re leaving behind will collapse if we don’t continue fairly sizeable subsidies. And the money also gives us a little bit of leverage as well, in terms of trying to make sure that the regime we leave behind is nice. I don’t mean nice in the sense of being polite like a Canadian, but nice like not torturing too many people, and not behaving in a way that makes them worse than the Taliban.

KR: You mentioned that you’ll probably leave Afghanistan in two to three years. You would leave presumably when your job pulls out?

GS: The contract’s indefinite. They’re probably happy if I stay. I hope they’re happy if I stay. Probably after a few years it’ll be time to think of something else to do. I might actually go back to school. Some of my predecessors have gone to school after the Afghanistan gig, and I might do the same.

KR: What would you see yourself doing?

GS: I have no idea. I honestly don’t. I mean, I could go back to journalism, I could work in multilateral organization. I don’t know, we’ll see.

KR: The anecdotes you were talking about in the book were really quite graphic, and at times it was even hard to read. You’ve experienced many of those firsthand, so how do you deal with those memories?

GS: It was tough at first, especially in probably 2008, 2009. When I’d attend a fireworks show, I’d feel nauseous. One time I was back visiting my sister here in Toronto and someone set off a bottle rocket right near her window. I didn’t quite realize that there were going to be fireworks. So it really caught me off guard because a bottle rocket sounds surprisingly like an RPG—well, before it goes bang, anyway. I was pretty shaken, but these things quiet with time. The brain heals itself, and I’m now, fortunately, in a job where my job is to have really long conversations with people, and I’m actually discouraged from going to see any active battlefields. I’m doing more long-form research, and really not trying to be anywhere close to the bang-bang, which is a nice luxury for me. It’s very healing.

KR: So you’re a senior analyst [at the International Crisis Group]. What kind of research are you looking into?

GS: We started off the year by doing a several-month project on political parties and the role that the parties were going to play in the transition period. And now I’m doing a paper that should be out at the end of this year or beginning of next year, about the degree to which the insurgency can spoil the transition militarily. I’m travelling out to remote provinces and sitting with security officials, elders and politicians.

KR: You mentioned sometimes having trouble writing the book and writing strings of ‘fuck, fuck, fuck,’ but did you find it to be sort of a cathartic process in the end?

GS: Yeah, absolutely. This book is therapy for me, really, I’m just getting a lot off my chest. And in some ways I’ll be happily surprised if people actually like reading this, because it really is just kind of a verbal diarrhea in places. It was a really healthy process. The work was not very efficient, because I was sitting with audio recordings a lot of the time and transcribing. So from the point of view of writing a book well, I don’t recommend that process because it takes forever to transcribe all that stuff.

KR: You’ve had some close calls, specifically being shot at in the ambush with the British and Afghan troops. In that narrative you actually sound remarkably calm, but what was your state of mind at the time?

GS: I think the middle of a firefight you’re often quite calm because your body goes into a sort of efficient mode of survival, and so it can be in some ways pleasant because you’re on this adrenaline high and you feel very calm and clear and awake. But then right after it ends I often felt sick because you come crashing down off that chemical high, and you just feel wretched, and you also know you were some place you shouldn’t have been. Because for me, for my work, there’s very rarely an occasion where it’s a good idea to be in a firefight. You’re trying to stay away from these things, you’re trying to get the stories you need to get without getting ambushed, and so there’s always that crushing feeling afterwards, of ‘I was in the wrong place, why was I in the wrong place? Why am I so stupid?’

KR: PTSD, I guess, would probably be a big issue. Was that ever a concern for you, coming out of this?

GS: Yeah, I went to see a psychologist afterwards, a guy at Sunnybrook (Hospital) who specializes in war reporters. And he talked to me for an hour, told me I don’t have PTSD, and I’m not depressed, but he gave me a checklist of things to watch for, and that was useful.

KR: You mention in the book a couple of times considering using a gun, but ultimately deciding against it. Was there ever a time you thought maybe I should just get a gun, to have?

GS: Yeah, in the book there’s some discussion of that and how we sort of wrestled with that question. And one of my best friends in Kabul just told me he’s planning on getting a shotgun. In a place where everybody’s armed, it’s difficult to be the only guy who’s not packing. But I still think it’s a bad idea in general for journalists to carry guns, because you don’t want to cross that line into being a combatant on the battlefield. And besides, I’m not a very good shot. I would want some training before handling any weapons. 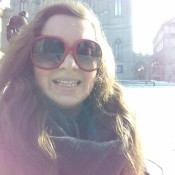 A brain drain? Not at the DMZ