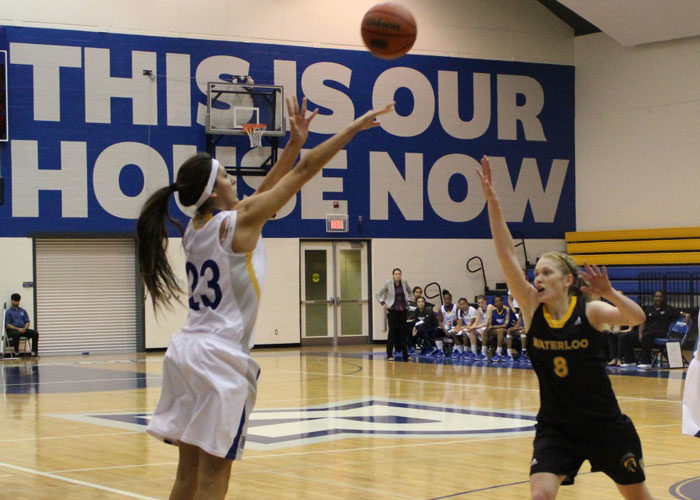 After five successful seasons with the Ryerson women’s basketball team, Silvana Jez signed her first professional contract with the HPC Royal Eagles—who are based in Apeldoorn, Holland—in August.

A former student at Ryerson’s school of occupational and public health, Jez, 22, played in 17 of 19 conference games in her final season, and averaged 13.4 points per game.

The Ryersonian spoke with Jez about her development at Ryerson, her decision to go pro, and her experiences in Holland thus far.

Silvana Jez: Ever since I came into university in 2011 and started my first year, I had aspirations of playing professionally. My first few years were very tough, and it wasn’t until about my third year that I really got serious about it. That’s when I started to take practice more seriously and train non-stop. I was fortunate enough to meet several people who played overseas, so they were able to give me their perspective of what pro life is about. I had a feeling that I was on the right path, and having strong fourth and fifth seasons both individually and with the team really helped me accomplish what I wanted.

R: How did your time with the Ryerson women’s basketball team prepare you professionally?

SJ: Over the past few years, the Ryerson women’s basketball team has [had] nothing but success. Every year we would improve immensely, and everyone was so self-driven, motivated and dedicated because we knew what we were capable of accomplishing. When we started being hunted by teams and realizing that we were one of the hardest teams to beat, that just brought more motivation into my game, and it made me better.

R:  What were your hopes and fears in signing overseas?

SJ: Coming into this situation I knew what I was getting myself into. It was all about taking risks. I knew there would probably be many ups and downs – one of them being that I was leaving my family and friends behind. It was the first time that I was so far away from them, especially being in another continent. I knew that I had to have a positive mindset coming in, and had to work hard. Not many people get this opportunity, which is why I am very grateful and enjoying every single minute of it – you never know what can happen next.

R: How has your experience been in Holland so far?

SJ: Holland is a very nice place and I am enjoying it so far. The people are very nice and welcoming, and it feels very homey. I get along great with my teammates and the coaching staff is good. Usually we have two practices a day- mornings are for conditioning and working out and practices are in the evening. I have a lot of time on my hands, so I try to utilize that and do different things to keep me busy, such as exploring more, going to the city (Amsterdam), meeting people and just enjoying every experience.

R: What does the future hold for Silvana Jez?

SJ: I really want to improve as much as I can this year, and make sure I reach the goals I set for myself. I want to make sure that I never settle, and that I keep myself busy and focused on my game so I can keep moving forward. I hope that this opportunity is one of many and that it opens doors for me in the near future. I would love to keep travelling the world through basketball, but at the same time making sure I stay satisfied and keep enhancing my game.

After basketball I will definitely consider being an assistant coach, just so that I can stay involved in the basketball environment. I would also love to be able to work in my field, which is public health, and get certified as a public health inspector.