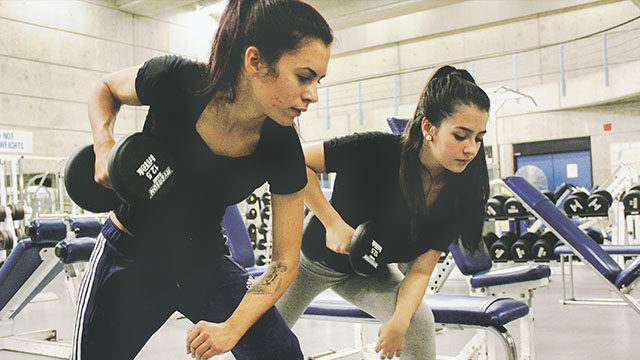 Women can now have the gym to themselves for 90 minutes, five days a week.

The new women-only gym time is a pilot project meant to create a comfortable and safe environment for anyone who self-identifies as a woman, and to encourage more women to come work out, said Anthony Seymour, recreation manager at the department of athletics.

On Sept. 2, the weight room and track at the Recreation and Athletic Centre began holding women-only hours from 9 to 11:30 a.m. on Mondays, Wednesdays and Fridays, and from 2 to 3:30 p.m. on Tuesdays and Thursdays.

Women-only fitness hours are happening at the RAC because it’s easy to create an enclosed and intimate space there, said Seymour.

There are no plans to extend the pilot project to the Mattamy Athletic Centre as of yet.

The RSU proposed the idea in late 2013, and surveyed over 2000 students to gauge a response to the initiative.

“We all pay the fee to go to the gym,” said Pascale Diverlus, RSU’s vice president, equity. “A variety of different students came to us and were like, this is a need.”

Diverlus said RSU got an “overwhelmingly positive” response from students.

Some women requested the hours for religious reasons, like being unable to work out in front of men without a head covering, said Diverlus, while others said they were uncomfortable using the facilities and wanted to go to the gym without being stared at.

The response from women gym users has been positive.

“There’s a lot less people, so you have the ability to go use whatever equipment without feeling (like you’re being) ogled at, or nervous because you can’t figure it out on your own,” said Manuela Wemegah, an occupational health and safety student.

Some students, however, have concerns about the inconvenience these hours pose for men.

“For some people, it cuts into their workout routines. For example, I was in my 20-minute jog and right at 10 minutes, I was told to leave,” said Neeshanth Sritharan, a business management student.

“If you’re accommodating one group, you don’t want to sacrifice another group at the same time. It’s equality, right? If anything, maybe you can have a separate room set up for (women)…and have two groups working out at the same time,” he said.

The hours also sparked criticism on social news-sharing site Reddit, where detractors posted in both the Mens’ Rights and the Ryerson University subreddit pages to express their opinions.

“This is so stupid. This isn’t about equality, it’s not even about resources, it’s about making men feel unwelcome and like ‘second-class citizens,’” commented one user.

“So, do we get male only gym time or what? Kinda weird that both sexes pay the same price for the facilities,” commented another.

Only one student has submitted a formal complaint about the program to Ryerson Athletics so far, according to Seymour. 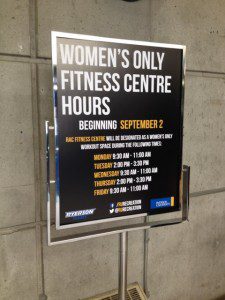 Bhamini Khalsa, a psychology student and a regular at the gym, said she isn’t fazed by designated women-only hours. But she has noticed more women working out since the start of the semester.

“The first week there were barely two females. And now you see like 15 or 20, so it’s gaining recognition as women are coming in and feeling more comfortable with it, so that’s a good thing,” she said.

During regular hours there could be up to 70 people using the weight room and track at the RAC, but 10 per cent or less are women, said Seymour.

Seymour said Ryerson Athletics might tweak or eliminate hours depending on the program’s popularity after an assessment at the end of October.

“We’re only doing about half the numbers, but we’ve got five times as many women as we’d normally have, so for me, at this point, that’s a success,” said Seymour. “Does it sustain? That’s going to be another question.” 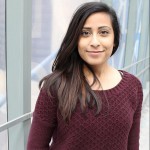