Racist poster by anti-immigrant group taken down on campus

A poster for the Canadian chapter of the white supremacist group Generation Identity appeared on Ryerson campus Monday morning – only to be torn down shortly after.

The poster was on a board outside the Student Campus Centre. It was taken down by the Ryerson Students’ Union (RSU) vice-president of equity, Camryn Harlick, late Monday morning.

The Canadian branch of Generation Identity made news last month when its recruitment material began popping up on multiple university campuses. Activists and student union representatives responded swiftly by tearing the posters down. 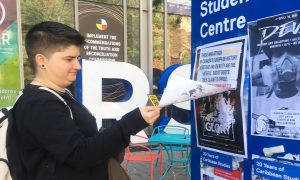 RSU’s Camryn Harlick tears down the poster for Generation Identity outside the Student Campus Centre. (Photo by Donya Ziaee)

This is the first reported sighting of the group’s material at Ryerson.

Generation Identity defines itself as “an ethno-nationalist and identitarian youth movement.” It originated in France in 2002 and has since spread across various European countries. More recently, it has found its way to North America.

Unequivocally anti-immigrant, European chapters of this movement have advocated for tightening Europe’s borders, even resorting to direct action to block migrants from coming in.

This summer, some members went as far as buying a ship to physically obstruct search-and-rescue ships helping migrants in the Mediterranean Sea.

This mission, which they called Defend Europe, received support from the likes of David Duke (the former grand wizard of the Ku Klux Klan), and at least two neo-Nazi publications, dailystormer.com and Richard Spencer’s altright.com.

The mission ended with a series of humiliating setbacks, including a mechanical failure on their ship that resulted in a humanitarian crew coming to their rescue.

The Canadian chapter of Generation Identity was, according to the group’s website, created in 2014 to “re-instil traditional western values and traditions.”

It challenges the notion that Canada is a “nation of immigrants” and defines its mission as “a response to Canada’s decaying identity, increased Third-World immigration, and rising crime rates.”

As universities reopened last month, the group boasted on social media that it had “targeted almost every campus from Manitoba to Halifax” with its posters.

In an interview with VICE, the national leader said that more than 100 students helped put up around 1,000 posters across five provinces.

Harlick has no reservations about removing the group’s material.

“There shouldn’t be a space for white supremacy on our campus,” they said after taking down the poster. “We need to be actively doing anything we can to dismantle that.”

Nick Gardner, a student in the sport media program, says he agrees with the decision to remove the poster.

“To post that in a very multicultural type of university, it’s just not appropriate… When you’re becoming hateful and clearly discriminating towards multiple groups of people, it’s not OK.”

“(It’s) very offensive to Indigenous people especially. They built this country. They were here before the Europeans,” adds Celeste Kelly, a student in business management.

Austin, a business management student who preferred not to share his last name, disagrees. 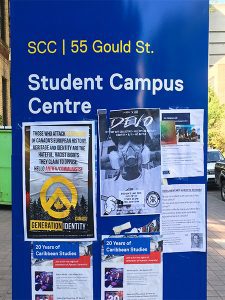 According to university policy, all posters on campus must be approved and stamped by the RSU. Otherwise, they are removed.

Zandra Alexander, one of Ryerson’s media relations officers, said in an email that the university will be looking into the matter, but has not received any formal complaints.

Minzi Wataoka, a student in journalism, says she wants the university to investigate the group and be more vocal in its criticism. “They should voice it out. Tell us they’re not on their side.”

Generation Identity Canada has no formal group status at Ryerson, and it’s unclear whether the poster was put up by a student.

But Harlick adds that Generation Identity is only the latest culprit. They say they’ve been removing hateful posters from other groups on campus since the term began.

Isabelle Roman, a sport media student, says she’s seen other similar posters on campus before too, but still finds it surprising.

“You’d think especially at Ryerson, in Toronto, (that) we’d be past that.”

She agrees with taking down the posters but says we need to also inform the campus community that this is going on.

“I feel like people aren’t aware that this kind of thing even happens on campus… I think it’s good for people to know that it is happening so (they) can be aware and stand against it.”

These posters are anti-immigration, not racist (immigrants are not a race). The writer of this article should be ashamed of their use of clickbait. Sad!

I know that not everyone loves immigrants, they are used to steal work places. But from the other side, they add value to country economic.