After a silent release with the first issue, RADmag celebrated the release of their second issue last Thursday with an official launch party at The Great Hall on Queen Street West. The Ryerson student-run magazine showcases student’s works in photography, fashion and interior design and promotes collaboration from different Faculty of Communication and Design (FCAD) programs.

The bi-annual publication began as an idea around October 2013 when JC Pinheiro found himself as a fourth-year student with limited opportunities for networking and getting work published as a commercial photographer.

The launch party was hosted at The Great Hall on Jan. 29. (Elizabeth Glassen/Ryersonian Staff)

“Image Arts is a fine art program and it’s very heavily ingrained with that,” says Pinheiro, editor-in-chief and founder of the magazine. “I really struggled over my four years to get outside of the fine art realm and get that support.”

After receiving funding from the university, the first issue of RADmag was released in April 2014. It aims to bring together students from related programs who don’t currently work together, but who will be working with one another after graduation.

“You need to collaborate after you graduate so why wouldn’t you start building those relationships while in school? I wanted to build something like that,” Pinheiro says of his inspiration behind RADmag.

Julian Paulo Rodrigues, a fourth-year interior design student, whose work has been featured in RADmag, believes being featured in this magazine could give her more opportunities after graduation because of the exposure.

JC Pinheiro is the founder and publisher of RADmag. (Elizabeth Glassen/Ryersonian Staff)

“Even in the first issue, there are alumni that own their own design firm,” Rodrigues says, adding that it’s always good to be able to add submissions in order to help build a portfolio.

Although graduated, Pinheiro helps by overseeing the magazine as it begins to take off. “We’re getting known on school, on campus and that’s our primary audience,” says Pinheiro, who hopes to see the audience expand – both on campus and with industry professionals – in the coming issues.

RADmag is available at the Ryerson Image Centre on campus, Ryerson Artspace at the Gladstone, Type Books on Queen Street West and SOOP SOOP on Dundas Street West. The issue is also available to order online on SOOP SOOP’s website or reader’s can check it out for free online at radmag.ca. 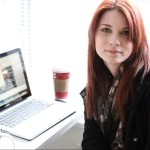 Elizabeth graduated from the Ryerson School of Journalism in 2015.

Elizabeth graduated from the Ryerson School of Journalism in 2015.