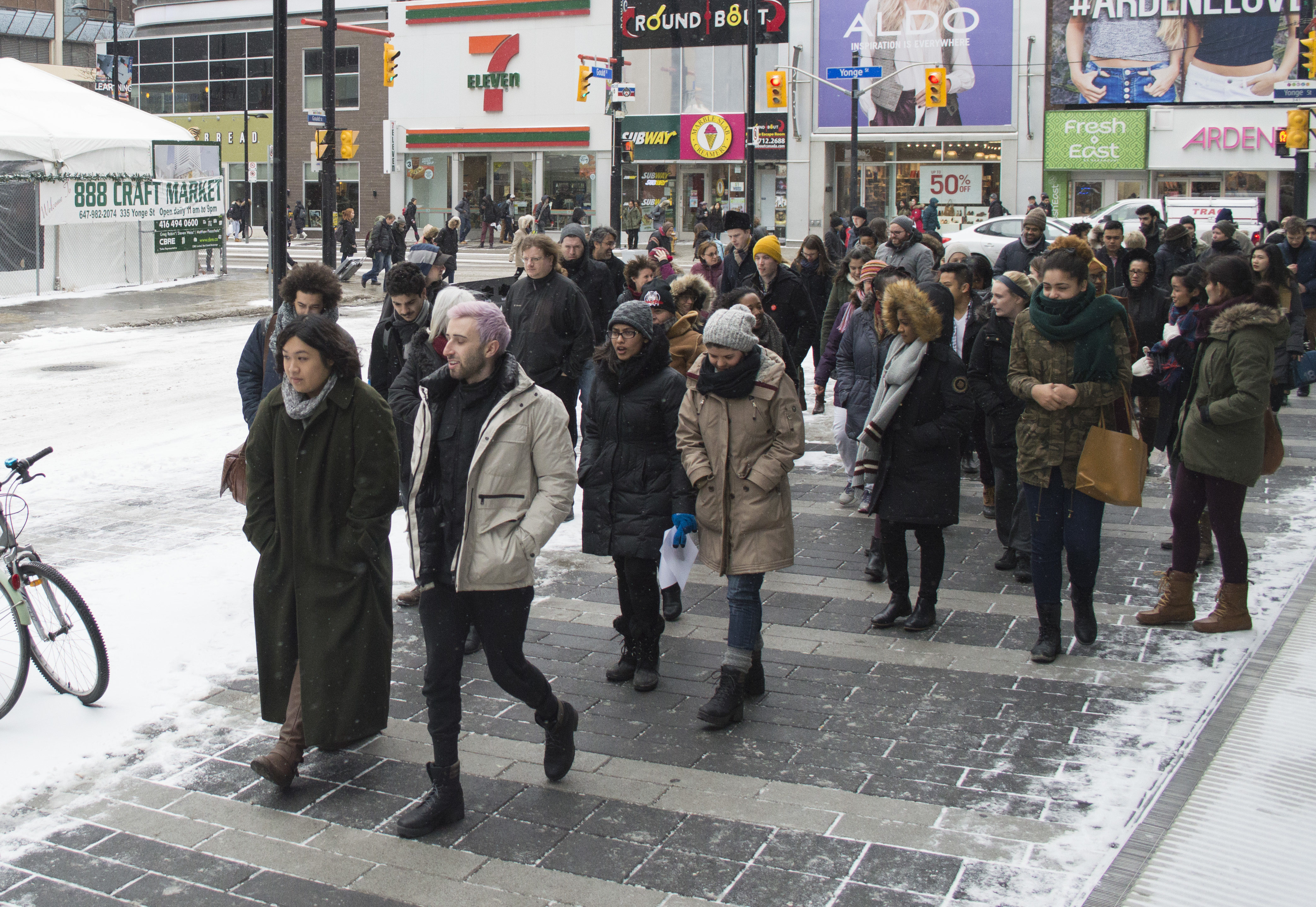 Following the rally at the SLC, protesters walk to the SCC to confront the RSU.

The rally and march was organized in light of International Women’s Week.

Winnie Ng, a social work professor at Ryerson, is the current CAW-Sam Gindin Chair in Social Justice and Democracy. She said Ryerson is very diverse and progressive in terms of social justice issues, but there is still more work to be done.

“We put all these policies into place, but how do we ensure that they are being transferred into actions?” she said.

She said the rally is a call to action. One specific and highly publicized case Ng mentioned is that of Gilary Massa, former executive director of communications of the Ryerson Students’ Union (RSU). Massa was fired from her position while on maternity leave in December and has filed a human rights complaint against the student union.

“We want to make sure the issue of fairness and equity are taken seriously by the administration and by all the campus groups in the union,” said Ng.

Massa’s dismissal is not an isolated event, according to Awo Abokorr, a co-ordinator for Ryerson’s Feminist Collective who is currently running for president of the RSU in next week’s election.

“It gets sensationalized, but there are many other cases on campus when women of colour are discriminated against in the workplace,” said Abokor.

Abokor said this rally is the first step in addressing issues such as job security, sexism and racism in the workplace for women of colour.

The rally falls just after the five-year anniversary of the Ryerson Anti-Racism Coalition’s (ARC) recommendations on the terms of reference for the task force on access, equity and anti-racism at Ryerson. Anne-Marie Singh, a criminology professor at Ryerson and ARC member, said that the next step could be revisiting ARC’s recommendations.

The 2010 recommendations included, but were not limited to, an inclusive curriculum, employment equity, Aboriginal employment and data collection.

Data collection is something Singh thinks Ryerson can benefit from as the University of Toronto is currently doing a campus-wide race audit. The audit will require students to identify their ethnicity in an effort to address and tackle the lack of representation on campus.

“We need to look at the recommendations that were made five years ago and see what’s been done and what we need to work on,” Singh said.