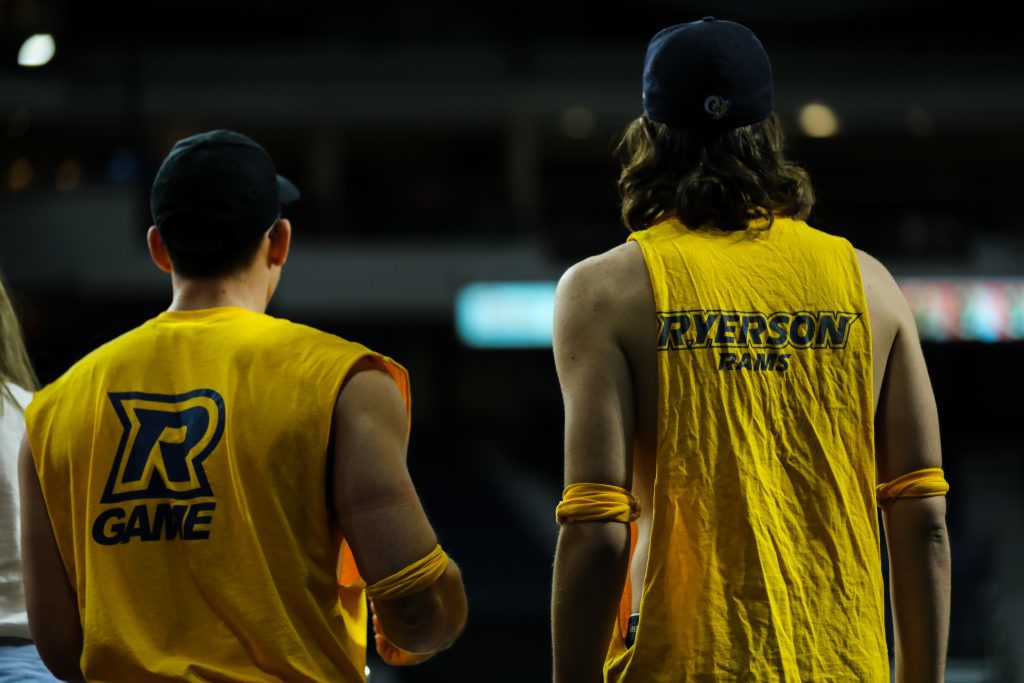 Ryerson fans look on as the Rams play the St. Mary’s Huskies at the U Sports Final 8 in Halifax. (Luke Galati/Ryersonian Staff)

HALIFAX — It was Thursday night and the Dalhousie Tigers and Alberta Golden Bears were locked in a tight battle. As the game entered its final minutes, neither team could gain a substantial lead, and with each possession the stakes were elevated as seconds ticked off the clock.

And while the players on the court may have been nervous, the atmosphere in the building was anything but. The Tigers are hosting the U Sports Final 8, which gives them the advantage of playing in front of their hometown fans. And in the final minutes of their opening game, those fans were deafening. Dalhousie went on to win that game 67-65 and the hometown fans were in ecstasy. 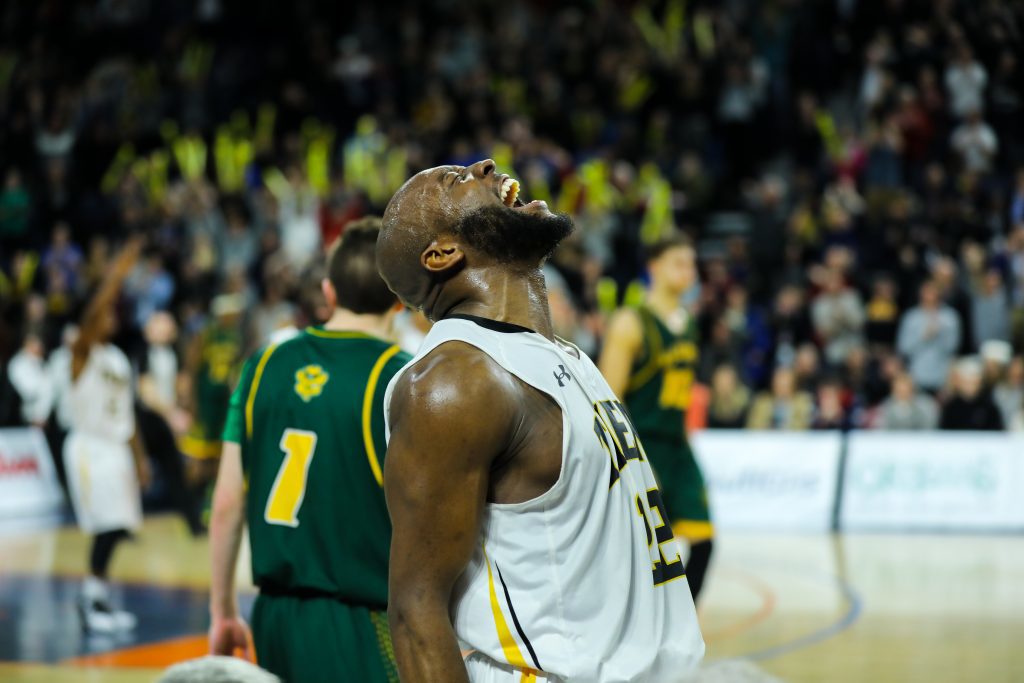 Meanwhile, the Ryerson Rams were watching the game in their hotel, aware that they would meet the winner of that game in the semifinals. It’s a difficult proposition to go up against not only an elite calibre team like Dalhousie, but also their passionate fans. Between 6,000 and 8,000 people are expected to show up for Saturday’s match and almost all of them will be wearing Dalhousie colours. But a small contingent of fans standing courtside to the left of Ryerson’s bench will be pushing back against the Tigers’ faithful.

The RamPack is the colloquial name given to the Ryerson superfans who show up dressed in blue and gold to cheer loudly for the Rams. Anyone who frequently attends Rams games at the Mattamy Athletic Centre (MAC) would probably recognize their face paint, gold T-shirts, kettledrums — and all the antics to match them. With the men’s basketball Final 8 in Halifax this weekend, they’ve taken their show to the East Coast. 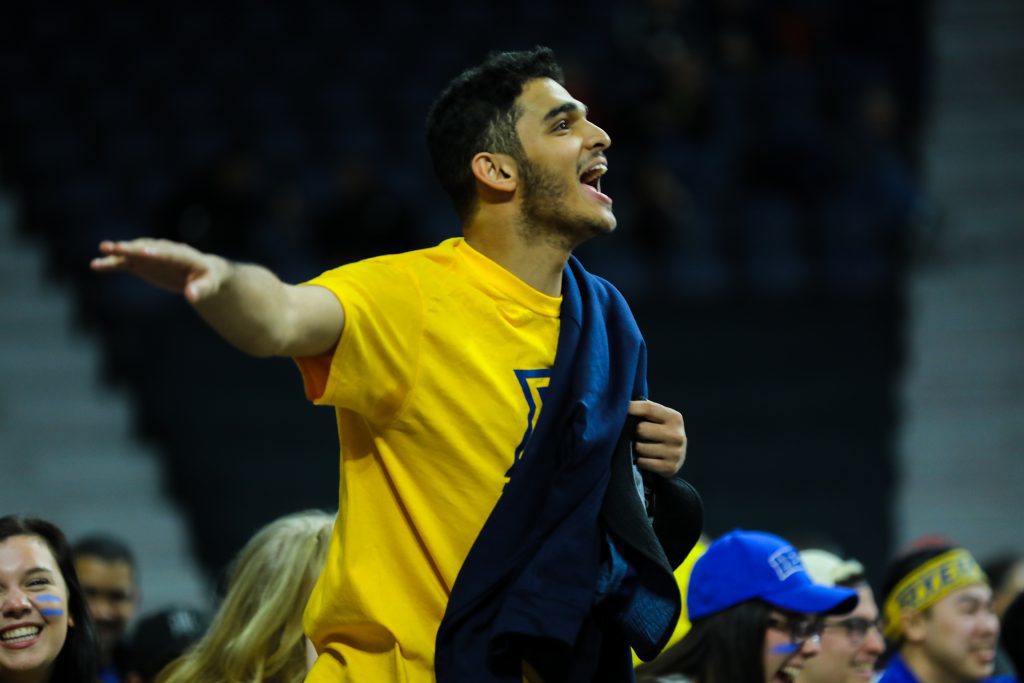 Ryerson student Moose Bendago cheering on the Rams at the U Sports Final 8 in Halifax. (Luke Galati/Ryersonian Staff)

“We know that other people notice that we’re here,” says Moose Bendago, a sports media student who is one of 20 Ryerson students who flew from Toronto to Halifax to attend this tournament. “We know that other people say, ‘Wow, the Ryerson Rams have brought out more fans to cheer on their team. They must be really passionate about that in Toronto.’”

Ryerson funded the flights and accommodation of 20 student-fans as part of an effort to generate a community atmosphere across the school. For a long time, Ryerson’s school spirit has been considered subpar. The RamPack aims to change that.

“We just envisioned creating a community feel,” says Edin Sehovic, a third-year nutrition student who is a founding member of the RamPack. “We’re trying to get our students to connect over something everybody enjoys, and that’s sports.” 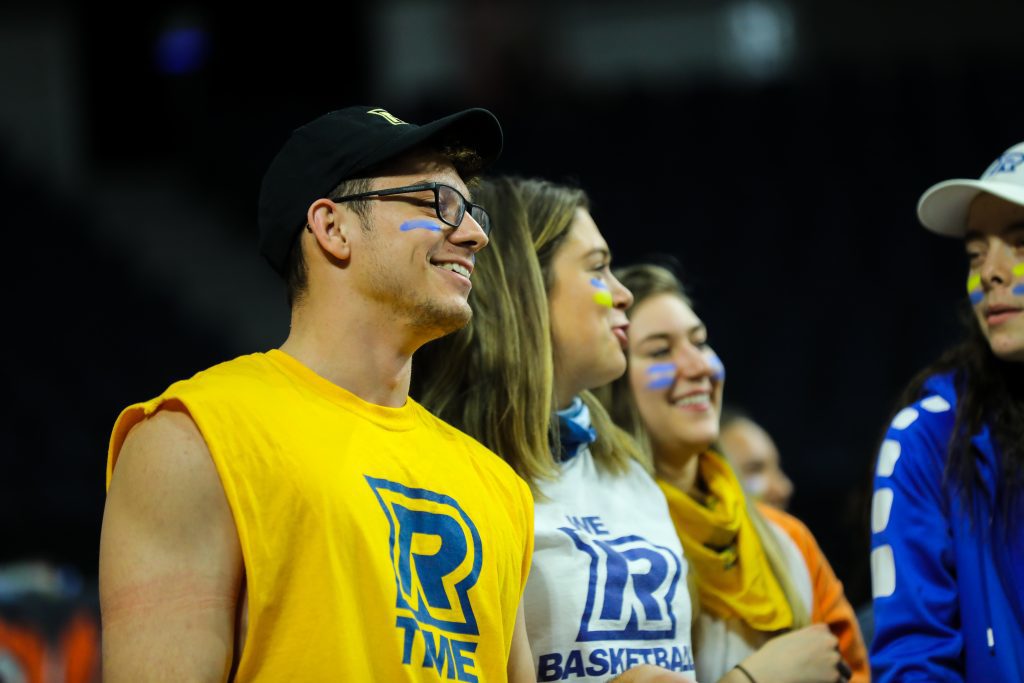 The travelling Rams fans are crammed into two rented houses in an unassuming residential area near downtown. One house is on Bland Street, but inside the atmosphere is anything but bland. Though they’ve been here for only one night, it already feels like a mini-frat house. Clothes are lying on the living room floor, empty beer cans decorate the tables and laughter blares throughout the house. A seemingly endless loop of Justin Bieber’s discography is this afternoon’s soundtrack.

Ryerson’s not playing on this day, which means the RamPack members get a chance to rest their voices after a tightly contested 79-70 win on Thursday night. The day off gives these fans a chance to get to know each other. Many of the RamPack’s Halifax contingent had never met before flying out, but they talk and laugh around a big dinner table like old friends. And that community atmosphere is something that many relish.

“We’ve only been here for a day and everyone’s really friendly with each other,” says Sehovic. “I think it’s quite interesting how you can do that. You just grab a couple randoms — they all have one commonality: they’re here for a sport. And they’re really great people. So we really have good vibes.” 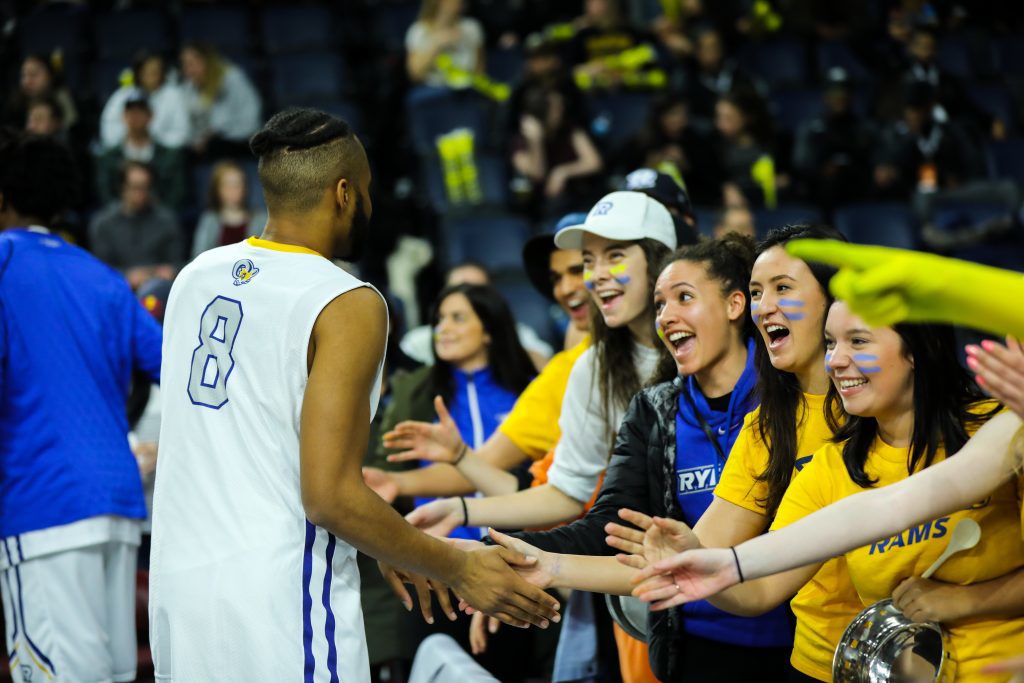 For the players, the sight of fans in their colours is a pleasant one, especially when they’re playing big games on the road. Ryerson’s first game against the St. Mary’s Huskies was also in a packed house, with the local Huskies urged on by thousands of fans. But glances over to the small sea of gold and blue helped push the Rams just a little bit further.

“Sometimes when you go far away and you see no fans you kinda get let down,” says fifth-year guard Adika Peter-McNeilly. “You kind of feel like the David, the underdogs. By having those guys there and cheering you on and being supportive, it means a lot to us. It gives us the extra push.”

Peter-McNeilly is a favourite among the Halifax RamPack. Among the props brought from Toronto is a giant cardboard cutout of Peter-McNeilly’s face. Though he was at first confused by the tactic, the First-Team All-Canadian has come around to it.

“It boosts your morale. It makes you feel good about yourself,” says Peter-McNeilly. “Seeing that cutout and everyone supporting you. And even the days when you’re not playing the greatest, they’re still supporting you. It means a lot to you when you’re a basketball player.” 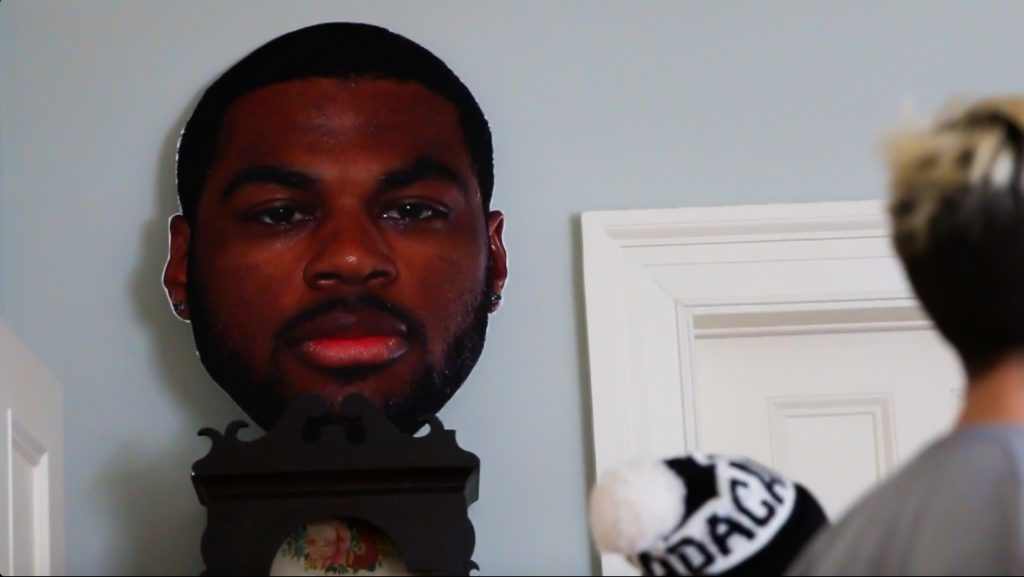 Typical game day prep for the RamPack this weekend is a lot different than what the basketball team will go through. For one, there’s alcohol involved, and while they both scout the other team’s top players, they tend to do it for different reasons.

“You go on their Instagram, you go on their Facebook. And you try to see what’s going on in their life,” says Hayley Graham, a third-year sports media student who’s also in Halifax this weekend “If you could get their girlfriend’s name or something you scream that. You just kinda get under their skin a little bit.”

On Saturday, the 20 RamPack members will go up against thousands of Dalhousie fans. The Scotiabank Centre was roaring in the Tigers’ quarter-final, and it’s only going to be louder in the semis. The RamPack will be pushing back against a sea of Dalhousie students, making noise that nobody in the upper rows will be able to hear. But the RamPack’s efforts aren’t for the people in the upper rows.

“[The crowd] may not have to necessarily hear us,” says Bendago. “But as long as the team can hear us, as long as Dalhousie can, we know that we’re going to have a chance to swing the momentum in Ryerson’s favour.” 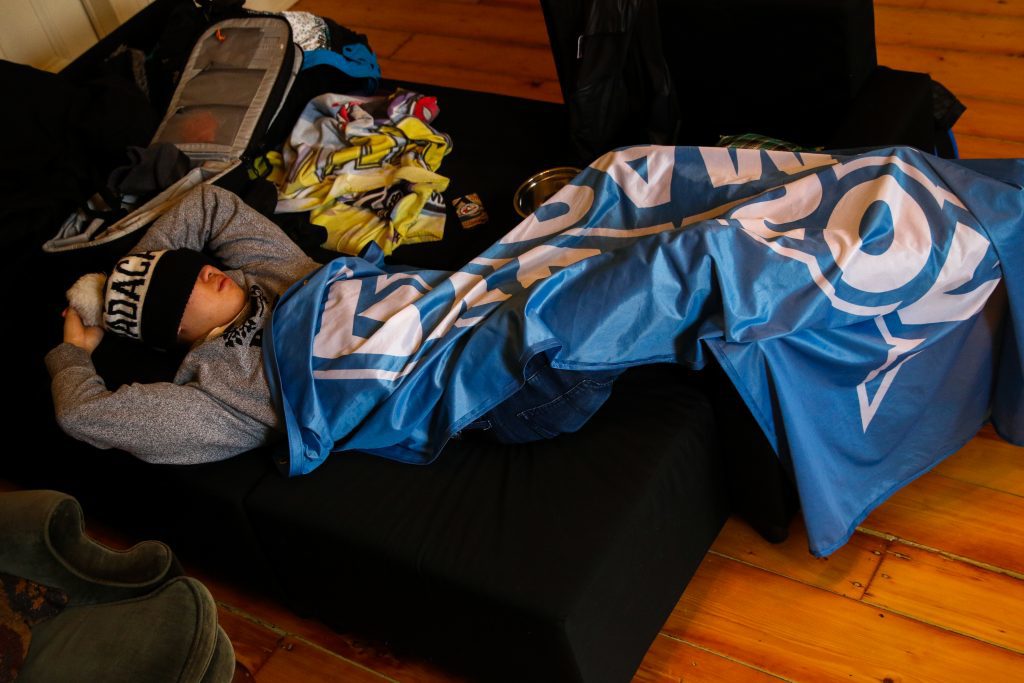 Ryerson Rams fan collapsed and asleep on a couch at their rented house in Halifax. (Luke Galati/Ryersonian Staff)