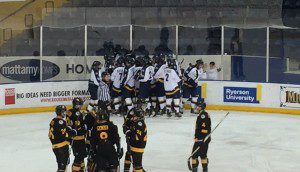 The Ryerson men’s hockey team is headed to the semifinals after defeating the Waterloo Warriors 5-4 in overtime Friday night at the Mattamy Athletic Centre. The win, after the Rams won 4-2 on Wednesday in Waterloo, gives Ryerson a sweep in the best-of-three quarter-finals matchup.

Friday’s win marks the second time the Rams have made the semifinal round since the 2011-12 season. Ryerson was eliminated in the second round by Lakehead during the 2013-14 campaign in two games, being outscored 12 to one in the process. Current Rams players Troy Passingham, Mitch Gallant and team captain Michael Fine played in that series and are looking to build on that past experience.

“We’ve definitely peaked at the right time and we’re going to bring that into the second round,” said Gallant. “We won a couple years ago and made it to the second round but it feels good to get the first sweep.”

Gallant scored the first goal for the Rams early in the game and was the overtime hero a few hours later. Single game celebrations aside, Friday’s win is a testament to the Rams recent improvement after the team finished a mediocre .500 entering the post-season.

Since October, the Rams have had three four-game winning streaks and a spattering of losing skids, but Rams head coach Graham Wise is proud of his team’s newly found consistency.

“I just felt when the month turned in February and we played those two games on the road — one at York and then U of T — things started to happen,” said Wise. “When you’re confident anything can happen.”

The Rams have four wins and an overtime loss over the last five games, a strong record heading into contests against higher seeded teams. The Rams carry a roster of 29 players, 10 of which have played in the OHL (Ontario Hockey League) while 11 are veteran players in their third year or higher.

The Rams’s veteran lineup is no surprise but the rookies are also stepping up as proven by centre Jamie Lewis. Skating on a line with Fine, Lewis was able to pot two goals for the Rams to help secure the win Friday.

“We have an unbelievable team with a lot of skill,” said Lewis. “We’ve been growing closer as a team and you can see every game that we’re getting a little bit better.”

This season the Rams had four overtime wins, which is an impressive feat for a club that has struggled to play consistently for the initial 60 minutes.

“It was kind of a rollercoaster year,” said Gallant. “We’d smoke a team and then we wouldn’t play well, but I think the last month we’ve been playing 60 minute hockey games and we’ve brought that into this series, so that helps.”

Becoming a top tier team in any league is a process. Wise says he is proud of his team’s current effort and is excited for the future and opportunity at the championship.

The Rams next opponent will be decided in the coming days, with round two scheduled to begin later next week.