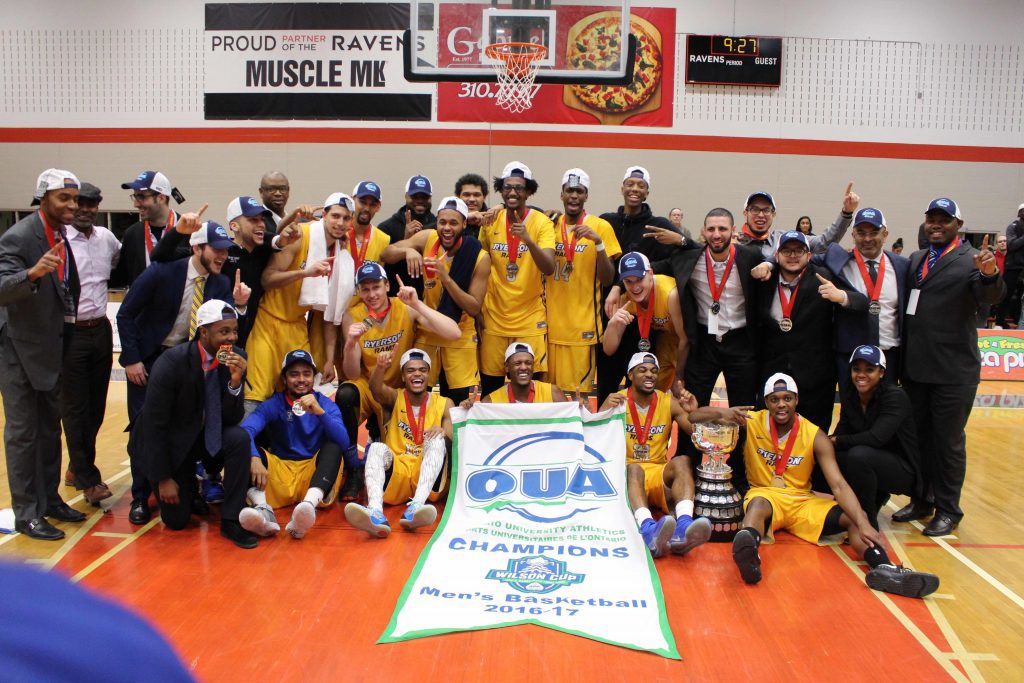 Ryerson Rams pose with the OUA banner and the Wilson Cup after their 86-79 win over the Carleton Ravens in Ottawa on March 4. (Andrea Vacl/Ryersonian Staff)

This version adds player and coach quotes plus game details.

Ryerson knocked off the nationally No. 1-ranked Carleton Ravens to win the Wilson Cup by a score of 86-79. 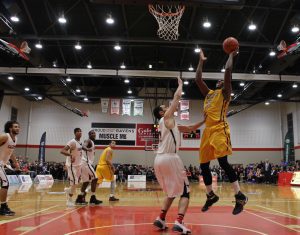 “They are the gold standard and to be able to get a win on their home court in this game is huge for us,” said Rams’ head coach, Roy Rana, of the Carleton team that had finished the regular season 21-0.

The provincial championship is the Rams’ second consecutive OUA banner after they won their first last March at the Mattamy Athletic Centre over the Ravens.

The game played out in a similar way to Ryerson’s semifinal win over the University of Ottawa Gee-Gees  the night before. Each team jockeyed for the lead.

Peter-McNeilly, who is playing his last year of eligibility with the Rams, and Carleton’s league MVP, Connor Wood, replied to each other’s hoops back and forth across the court.

Wood led his team with 25 points while Eddie Ekiyor added 22 for the Ravens.

Just as in the semifinals, Ryerson beat out the Ottawa-based team with a late surge.

“Going on someone else’s home court and grinding on two tough games, it just means a lot more… being our last year we just put everything on the court,” said Peter-McNeilly, who helped his team climb out of a 58-54 deficit at the end of the third quarter. 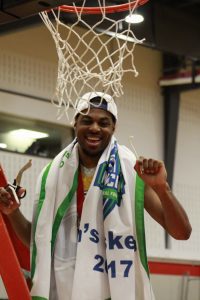 Rams captain Adika Peter-McNeilly, with the OUA banner draped over his shoulders, cuts his personal memorabilia off the game net after Ryerson’s repeat provincial championship on March 4, 2017.

The fourth quarter told the difference with the Rams edging ahead for good on a Diressa jump shot at 67-66.

Overall, the Rams attack was balanced with 42 points coming from the 3-point range.

“We kept reminding them to breath, stick to the game plan and don’t stop believing in themselves,” he said.

Both Carleton and Ryerson head to the national championship tournament in Halifax from March 9 to 12.

“They’re a really good team, they’re undefeated [through the season],” said Peter-McNeilly of Carleton. “We gotta give it up to them…we’re definitely going to see them again down the line.”

As Rana looked on to the nationals, he said, “there’s not going to be any easy games, we just hope we can continue playing well.”

Beside the two Ontario-based teams, six more Canadian university squads will compete in Halifax for the Canadian championship. The draw for the U Sport Final 8 will be made March 5.

From blue and gold to red and white