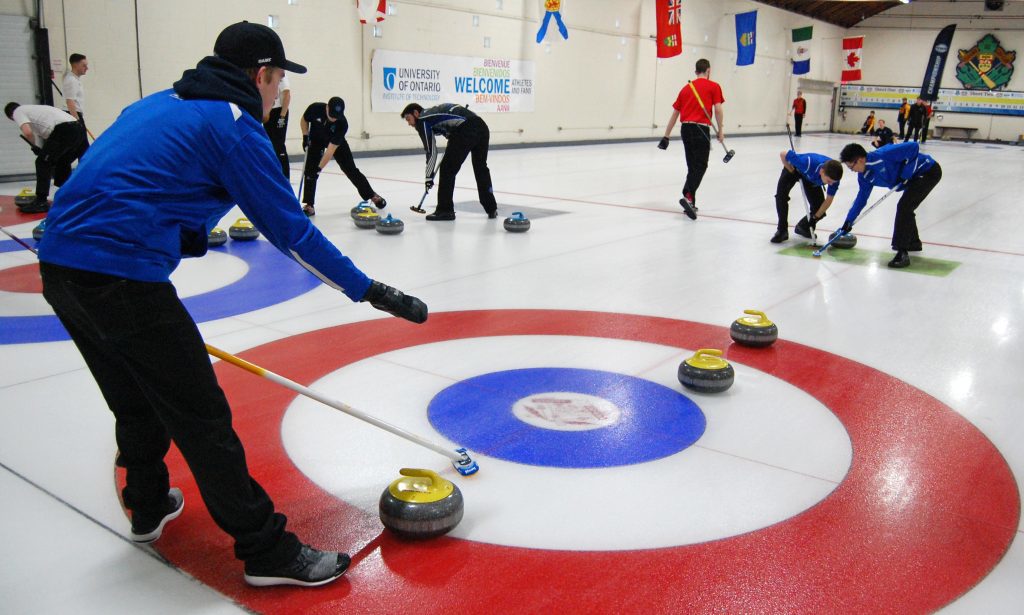 Ryerson Rams men’s skip Stuart Leslie (left) directs his sweepers, vice Alex Champ (left-centre) and lead Jonathan U (right-centre), during their game against the Brock Badgers at the 2017 OUA Curling Championship in Oshawa on Sunday, February 19, 2017. The Rams went on to defeat the Badgers 5-4.

Both Ryerson Rams curling teams needed wins on the final day of the round robin of the OUA Curling Championship to stay in the hunt for playoff berths. Continuing their fine form from day 3, both Rams teams went perfect for the second straight day. Although the men’s teams were unable to get the help they needed from results in other games to make the playoffs, the women’s team did, claiming their first playoff berth in just their second season as a program.

The men’s team entered the final day of the round robin at 2-3 and were matched up against the Brock Badgers in the early morning draw. The Badgers, who easily beat the Rams 7-2 at the McMaster Invitational in January, entered the game sitting second in Pool B with a 4-1 record.

Starting the game without hammer, the Rams got good takeouts from second Henry Lin and vice Alex Champ to limit the Badgers’ scoring opportunities. Rams skip Stuart Leslie would throw two nice draws to force Badgers skip Eric Bradey to a single point. The Badgers would tie things up in the second end after Lin and Champ each had a takeout fail to stay in the house.

After trading scores of two in the third and fourth ends, and then forcing a Badgers blank in the fifth end, the Rams caught a lucky break late in the sixth. Bradey’s first stone, a hit-and-stick attempt behind cover, picked before it passed the hog line. The shot would hit off the Badgers’ own guard and force the Badgers to a single point with hammer.

Down one with hammer in the eighth end, improved hitting from Champ allowed the Rams to split the house and sit two. Bradey did well to draw and sit one with his final shot, putting his rock just a foot in front of one of the Rams stones. Leslie executed a brilliant takeout with the last shot of the end, making contact at the right angle so the Badgers rock didn’t jam onto its backing, to seal a critical 5-4 Rams win.

“It’s nice to beat a team like that especially after last year losing to them in an extra end [6-5 at last year’s OUAs],” Champ said after the game. “It would have been nice to have (momentum) earlier in the week, but we’ve put ourselves under pressure and we’re performing so far,” he said.

The Rams faced off against the 6-0 U of T Varsity Blues in their second game of the day. With seven teams still mathematically alive fighting four just four playoff berths, the Rams desperately needed a win and other results to go in their favour to have a hope at the postseason.

The Rams were without hammer in the first end and didn’t have a strong start to the game, as neither Lin nor Champ were connecting with their shots. U of T was also rusty at the beginning though, allowing Leslie to limit them to just a single point. More misses from both teams came in the second end, but Leslie did well with his final shot to bail out his team and salvage a single point. After the Rams stole a point in the third end, their play started improving in the fourth. Champ and Leslie did well to get rocks into the four foot circle and force U of T into a difficult shot for two. U of T could not connect on a takeout, giving the Rams another steal of one to take a 3-1 lead into the fourth end break.

The Rams did very well as a team in the fifth end to hit U of T’s stones out of play and forcing the Blues to throw away their final stone to blank the end. In the sixth, a much-improved Champ and Leslie did brilliantly to draw stones into the four foot circle to make it difficult for U of T to score two. Attempting to throw big weight and blast some of the Rams rocks out of the house, U of T’s skip only managed to score a single to trail 3-2. An uncharacteristic miss from Leslie with his final shot in the seventh end gave the Blues a steal of one to tie the game heading into the final end, but it was too little too late for the Blues. The Rams scored a single in the eighth end after U of T’s skip came up heavy on his final draw attempt, giving the Rams a 4-3 win without Leslie needing to throw his last shot.

Even with the win to put themselves at 4-3, the Rams still found themselves in a tie for the final playoff spot. Results on other sheets did not go their way though, as a Waterloo win and a Carleton loss gave each of those teams a 4-3 record as well. Having lost to both teams (7-2 to the Warriors, 5-4 to the Ravens), the Rams lost the tiebreaker, finishing the round robin in fifth place in Pool B and missing the playoffs.

The Rams women’s team entered day four sitting at 3-3. Facing the 0-6 UOIT Ridgebacks in their final game, the Rams needed a win, as well as a loss by the Trent Excalibur in their game against the Laurentian Voyageurs, to claim the final playoff spot in their pool.

The Rams opened the game with hammer and delivered a flawless first end. Rams lead Teagan Walton did well to split the house following a missed takeout attempt from Ridgebacks lead Hafsah Sher. Second Audrey Wallbank was able to draw in a third and guard nicely, and more missed takeout attempts from the Ridgebacks opened the door for vice Nicole Titkai to make two brilliant draws to the four foot. Ridgebacks skip Brittany Andrey nearly rescued her team with a draw to the four foot of her own, but Rams skip Maggie Macintosh did brilliantly to hit Andrey’s stone out and avoid jamming with the last shot of the end. Macintosh’s beautiful takeout would roll out, but the Rams still managed to score six.

The Rams did well defending their lead in the second end, as excellent hits from Wallbank and Titkai help guide the Rams to a steal of one. The Ridgebacks would finally get on the board in the third end with a hit-and-stick for one, but more hits from Titkai and Macintosh ensured the Rams’ big lead would stay intact. The Ridgebacks could only score a single with hammer in the fifth end, shaking hands afterwards to concede a 9-2 loss. A five point fourth end from the Voyageurs propelled them to a 9-1 win, moving the Rams into the fourth and final playoff spot in Pool A.

“It’s going to be great,” Champ said of the women making the playoffs. “It being the second year of the program it’s fantastic, I don’t think the school can ask for a lot more,” he said.

The Rams women will face the Brock Badgers, who went 7-0 to win their pool, in the quarterfinals. The winner advances to play in the semifinal round on Monday, where a win would secure a place at the U Sports national championship in Thunder Bay in March. 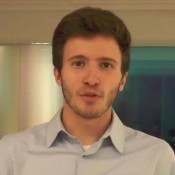