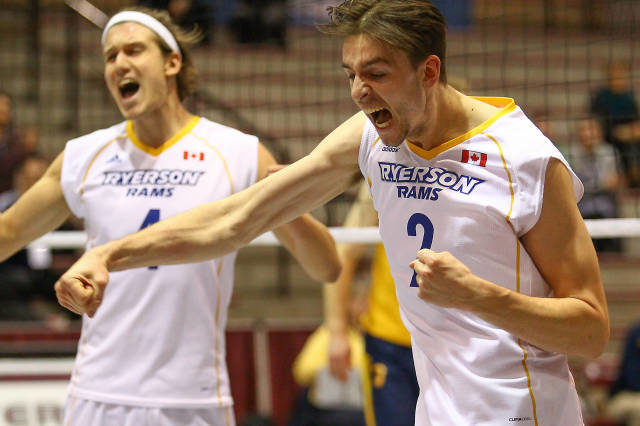 The Ryerson men’s volleyball team defeated the Queen’s Golden Gaels in four sets on Thursday evening to advance to the OUA finals.

By being an OUA finalist, the Rams have also punched their ticket to the CIS National Championships. This will be the team’s first appearance in school history.

The team started out the game with a lead early in the first set 8-2. After a timeout, the Golden Gaels went on an 11-4 run to take a 13-12 lead. The teams traded that lead several times in the set before the Rams took it by a score of 25-22.

With the Rams down 1-0, the second set did not disappoint. With the game tied at 24-24 late and the set up for grabs, the Rams were able to take the next two points, one being on a controversial double hit call. The third started with the score tied at 1-1 in sets.

It was another nail-biter, as the Rams held a late lead in the game, 24-23. With the team needing a big play to take the set, OUA second team all-star Lucas Coleman stepped up. Coleman was able to get a kill, resulting in the set victory for the Rams and a 2-1 lead.

The OUA gold medal game will take place at 8 p.m. on Friday, March 11 at Burridge Gymnasium in Hamilton, Ont.

The Rams square up against the host McMaster Marauders, who swept the Waterloo Warriors in three sets in the other semifinal.
Final FourouaRamsRyerson Universitysemifinalvolleyballwin
0 comment
0
FacebookTwitterEmail