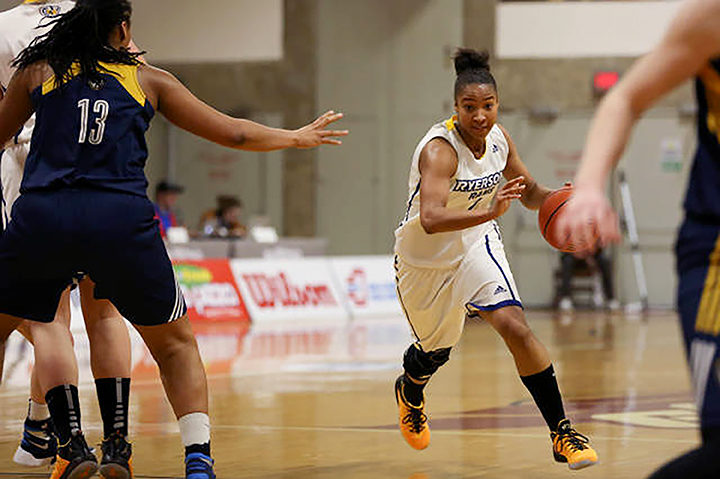 The Ryerson women’s basketball team is moving on to the gold medal game of the Ontario University Athletics (OUA) final four as it beat the Windsor Lancers 79-62 Friday night.

Going into the game head coach Carly Clarke was looking for the team to play with more intensity on defence against a more physical Windsor team.

Ryerson set the tone defensively in the first quarter holding the Lancers to 14 points. Windsor struggled to get shots going five for 16 or 31.3 per cent from the field.

Ryerson went into the half with an 11-point lead shooting 56.3 per cent from the field for a 41-30 lead outscoring Windsor 23-16 in the second quarter.

Jez led the team with 12 points, while OUA MVP Keneca Pingue-Giles was quiet on the score sheet with only two points, but contributed with nine assists. Ryerson’s aggressiveness was evident in the first half forcing Windsor to commit 11 turnovers.

The Rams’ momentum carried into the second half with six straight points to start pushing its lead to 17 early in the third quarter. After starting the game with a zone defence, Windsor made the switch to man-to-man defence in hopes of containing Ryerson’s momentum.

In the fourth quarter Ryerson took over the game increasing their lead to 20 points as the team started to make more shots from beyond the arc finishing the game with six three pointers.

In her player of the game interview Jez was proud with the team’s effort.

“We knew what we had to do, which was to come out hard defensively and that is exactly what we did and offensively we were all able to score,” Jez said.

Ryerson will now face the Ottawa Gee-Gees in the gold medal game where they hope to win the first OUA banner in Ryerson history.

“ One thing that we have to do is keep our defensive mindset like we have so far and being tenacious on defence. That is what is going to win us the game,” Jez said.

“I am hoping that we can bring the banner home and I am confident that we can get it done.”