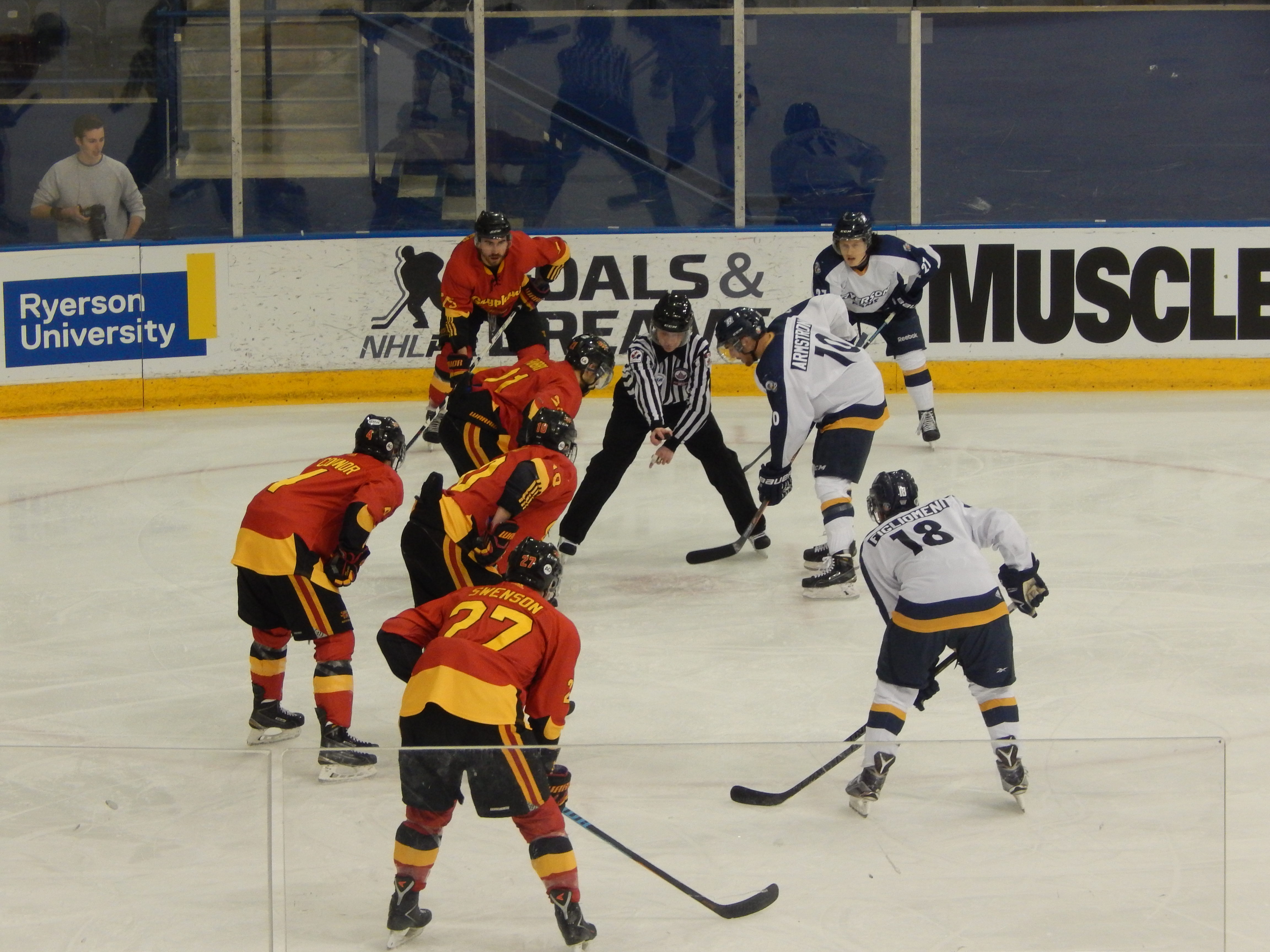 NOTE – The Rams dropped game three by a score of 11-3, ending their playoff run.

After losing its first game in the best-of-three series against Guelph on Feb. 25, Ryerson faced elimination last night at the Mattamy Athletic Centre.

While there were no goals scored, the first period was filled with turnovers and back-and-forth action. The shots were 9-4 in favour of the Rams, and despite the early turnovers, the team was playing with a do-or-die mentality. Rams forward Marcus Hinds set the tone for the first period with a huge open-ice hit.

With three seconds left in the first period, Guelph took a pair of two-minute minor penalties, giving Ryerson a 5-on-3 power play to start the second period.

“We were a bit sloppy at first, but we communicated and helped each other out as the game went on,” said Troy Passingham, the Rams’ starting goalie.

The Rams wasted no time once the puck hit the ice in the second period. Less than two minutes into the period, the Rams made it 1-0 with a power-play goal from freshman defenseman Brandon Devlin.

As the second period continued, the game became very physical. Both teams took multiple undisciplined penalties, however, the score remained 1-0 Rams after two.

When the third period began, the tension was palpable. The Rams were 20 minutes away from forcing a third game and their play reflected their desperation.

The Rams came out hot in the third, controlling the game with a great defensive play from defenceman Mitchell Theoret.

He set the tone when he crushed a Gryphon into the boards causing the home crowd to cheer with delight.

However, with just under two minutes to go in the game, Gryphons forward Kyle Neuber scored to tie the game at 1-1, forcing an overtime period. The shots were 29-26 in favour of the Rams to begin the 20-minute overtime.

“After allowing the goal, I would say the room was quiet,” said Graham Wise, the Rams’ coach. “Positive, but quiet.”

Overtime started with early chances for both the Rams and the Gryphons.

In the midst of a physical overtime period, the Rams kept grinding.

With 3:12 remaining in overtime, Rams captain Michael Fine did what he does best — he whacked home the game winner, sending the Rams to Guelph for the deciding game on Feb. 28.

“Fine was double-shifting the entire overtime, and he just took control of the game,” Passingham said. “It was incredible.”

“We knew we were the better team,” Passingham said. “We just regrouped in the overtime intermission and really took it to them. We picked up the win we deserved.”

Give Leo the Oscar!