Rams have high hopes for playoffs

Ryerson Rams sports teams have never collectively done as well as they are right now. Each of the men’s and women’s hockey, basketball and volleyball teams are currently chasing a playoff position with a chance to take down some top teams in Ontario University Athletics (OUA) playoffs. With teams having made the turn on the halfway point of their seasons, let’s take a look at their chances.

The Rams hockey teams would be a logical place to start. The men’s team sits in fourth place in the West conference of the OUA with a record of 11-8-1. That puts them in the middle of the pack for playoff contention as eight of the 10 teams in the conference make the post-season.

It seems unlikely that the bottom two teams, Guelph and Laurier, could catch up to the Rams, who are eight points up on ninth place with eight games to go. Barring a collapse and a great turnaround at the bottom, the men’s team will keep its place going into the post-season.

The Rams women’s hockey team faces a more difficult task. Sitting in ninth place with seven games to go, the Rams have to catch one of the three schools currently fewer than five points ahead of them. If they win more games than one of Laurier, York or Nipissing then the Rams women should catch them. With games left against these three teams this difficult task might not be too much of a stretch.

For men’s basketball, the answer is easy. They’re hosting the Canadian Interuniversity Sport (CIS) final eight tournament this year, so they’re already in.

But that doesn’t mean they’re going to lay off the accelerator. Having lost only to the University of Ottawa and Carleton University, the final two schools in the OUA last year, Ryerson basketball has something to prove to Ottawa’s elite basketball teams this March.

The Ryerson women’s basketball team also sits at the top of its division at the season’s halfway point. At 9-3 their stock is rising and they should host a few playoff games come late February.

In volleyball, the Ryerson men sit in second place with a 11-3 record and the women in third place with a 10-3 record in their respective conferences. There are six games to go for each.

Playoffs will be in the cards for both if they maintain these positions. The men would have to go into a complete nosedive to drop to where 7-7 Western could knock them down. The women only have to stay above 8-5 York to get into the post-season.

All of these programs are deep into their seasons and while some, like Rams basketball, are virtual locks for post-season play, others have little room for error.

The men’s hockey team should be in the playoffs at the fourth of fifth seed. The volleyball teams will be in good position to host some playoff games. In basketball, the Rams are set to host the CIS finals and will be ready to make a statement. The women’s hockey team has the most difficult task and will have to show some real Rams spirit to make it to the next stage. 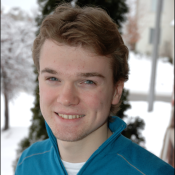 What to expect of the Student Learning Centre

Spotify: to charge or not to charge?