It only took six minutes to change the game for the Ryerson men’s soccer team. 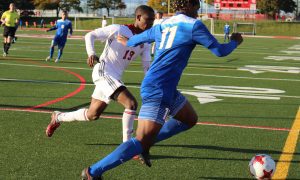 Rams midfielder Misel Klisara made the assist for the first goal, which was almost enough to take Ryerson to the OUA finals.

Ryerson held a 1-0 lead until the 90-minute mark at York’s Alumni Field.

But with seven substitutions in the second half, five of which were from York, and fouls from both sides that ended several plays, the referee gave six minutes of stoppage time. Stoppage time is given to make up for minutes lost during regular play, usually between one and six minutes.

It was in those last moments that the Ryerson Rams’ defence fell to the York Lions’ attack, and Omar Marzouk found the equalizer for the home team.

Lions fans rushed onto the field, swarming the players who had just pushed the game to another 30 minutes. They had all the momentum going forward.

Rams midfielder and fourth-year Rose looked for a second goal to put Ryerson on top, but his shots were just shy of the net or saved by Lions keeper, Quillan Roberts. 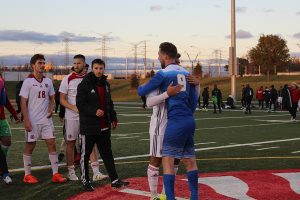 Ryerson Rams fell to the York Lions in the semifinals of the OUA final four. (Photo by Brenda Molina-Navidad)

On the other end of the field, Rams keeper, Praveen Ahilan, made two difficult saves that had  fans from both sides standing in the bleachers.

After a scoreless overtime, the match would be decided in penalties.

Ryerson defeated the University of Toronto in a shootout last weekend to advance to the final four, but Friday held a different outcome: 5-4 for the York Lions.

The Lions advanced to the OUA finals on Nov. 4 at the Alumni Field where they defeated the Carleton Ravens 2-0 and secured a spot in the U SPORTS championships in British Columbia. While Ryerson went on to play for the OUA bronze medal against McMaster University on Saturday.

Ryerson did not end the season empty-handed. In their fifth straight OUA final four appearance, they earned the bronze medal after defeating McMaster 3-0 with goals from Arya Hemati, Nick Lambis and Daniel Merean.