Record number of people will have visited Toronto food banks in 2020: report 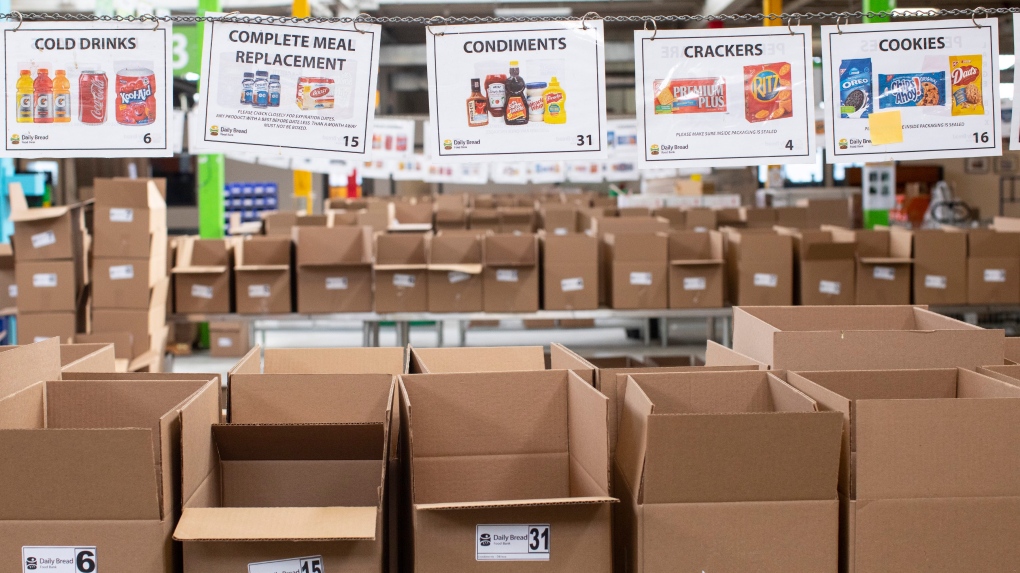 Boxes wait to be filled with provisions at The Daily Bread Food Bank warehouse in Toronto on Wednesday March 18, 2020. THE CANADIAN PRESS/Chris Young

TORONTO -- As Toronto continues to combat a second wave of the COVID-19 pandemic, the city also has another crisis on its hands—rapidly growing food insecurity resulting in record-high visits to food banks.

Daily Bread Food Bank, in partnership with North York Harvest Food Bank, released its annual “Who’s Hungry” report on Monday, which predicts that 2020 will have the highest number of food bank visits ever recorded in Toronto.

"The amount of new clients coming to food banks has increased by 200 per cent," Chief Executive Officer Neil Hetherington told CP24 on Monday.

He added that 104,000 clients visited Toronto food banks in September.

Data from the report is based on 397 surveys collected from food banks users in March. The non-profit organization notes that due to the “considerably smaller sample size to previous years, caution should be applied when making comparisons to previous years’ findings.”

According to the report, the city was already coping with a growing trend in food insecurity before the COVID-19 pandemic hit.

In the year leading up to the pandemic, Toronto food banks saw close to one million visits, a five per cent increase compared to a year earlier. In addition, the report said that pre-pandemic food bank visits in the city had climbed back to the same level as the peak following the 2008-2009 financial crisis.

"In that recession, the peak food bank usage actually took two and a half years to get to that point," Hetherington said. "If you think things are challenging now and the time that it will take to recover from this, we’re looking at something down the order of two or three years before we can start to see a decline in terms of the number of clients having to make use of food banks.

Although COVID-19 infections eased during the summer after the peak of the first wave, growth in food bank use has not slowed down.

By June, food bank visits had increased by 22 per cent compared to the same period last year, and by August that number had grown to 51 per cent, according to the report.

But many food bank users were still going to bed hungry as 85 per cent of survey respondents say that they did not always have enough food to eat after accessing food banks.

The pandemic also appears to have greatly impacted the amount of new users visiting food banks this year as three quarters of survey respondents who had never accessed a food bank before said they began using the service because of COVID-19.

If current usage trends continue, Daily Bread predicts there will be close to 1.4 million visits to food banks in Toronto in 2021.

These are concerning statistics as the city grapples with an influx of record-breaking COVID-19 infections.

On Monday, provincial health officials reported 508 new COVID-19 cases in Toronto, 364 on Sunday and 456 on Saturday.

According to Daily Bread, precarious employment, insufficient income and unaffordable housing are driving food insecurity in the city.

Sixty-two per cent of employed survey respondents were working in precarious temporary, part-time or contract jobs, which have been hardest hit by job losses during the pandemic.

Meanwhile, 83 per cent of survey respondents living in private market rentals were paying more than half of their income on housing, putting them at high risk of homelessness.

Food bank users also reported a median income of $892, less than half of the monthly income required to have a basic standard of living based on the official poverty line for Toronto.

"The average food bank user has just under $8 a day after paying for rent to survive and nobody can make that happen," Hetherington said.

Daily Bread recommends three immediate actions to prevent another long-term food insecurity crisis, including eliminating poverty, making employment a pathway out of poverty and providing affordable housing for all.