Going on exchange is an adventure few students get to experience, but a research group has high hopes to change that.

The Report of the Study Group on Global Education released last week, found that only 11 per cent of post-secondary students studied abroad last year.

The Centre for International Policy Studies at the University of Ottawa, in partnership with The Munk School for Global Affairs, wants to see 25 per cent of all Canadian post-secondary students studying overseas in the next 10 years.

A new national initiative, Go Global Canada, has been recommended in order to hit that 25 per cent target.

If developed, Go Global Canada would support 15,000 students learning abroad over a span of five years. By 2027, that number should increase to 30,000 students leaving Canada on exchange.

Studying abroad can cost thousands. Students who study abroad must find a way to finance travel, living and visa expenses. Sometimes cost becomes the main deciding factor when planning out an exchange.

Saura Haggart-Smith, a fourth-year creative industries student, did her exchange in New Zealand at the Auckland University of Technology last year. 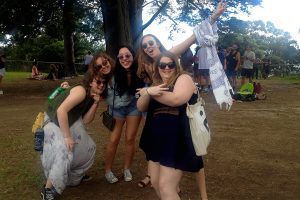 “It was actually my third choice. My first two were Scotland and England and then New Zealand, just kind of due to price because it’s a little more expensive,” she said.

Haggart-Smith wanted to do her exchange somewhere with a good television industry, while still keeping within her budget. She spent, on top of tuition, approximately $8,500 in expenses for her one-semester exchange.

“It was interesting because creative industries is such a new program that it’s really only offered in Australia, New Zealand, UK and Canada,” she said. “It had been in New Zealand a little bit longer so it was relatively easy to transfer over because I’m taking classes from RTA and through journalism, as well as creative industries and TRSM.”

“So, there was a lot of wiggle room for my program.”

She also said that she received a great amount of support from Ryerson during her application process and when she arrived in New Zealand.

Laura Morello, student mobility officer at Ryerson International, assists students who plan on doing an international exchange. She says that the goal to increase student learning outside of Canada is ambitious.

“The number of Ryerson students that go on exchange is a bit lower than the average, but that’s something that is really a focus of our office,” she said. “It’s something that we really want to increase [student mobility], especially outbound.”

Morello says that Ryerson has recently launched several different initiatives to help support students who want to do exchanges. One being  the Ryerson International Exchange Opportunity Scholarship, which will grant 40 Ryerson students doing exchanges in the 2018-19 academic year $2,000 each, to help cover costs.

“We have partnerships with 75 institutions in 25 countries all around the world, but the majority of our students do go to Australia, the United Kingdom and France,” she said.

According to Shea, on average, 200 Ryerson students go on outbound exchange, most of whom come from TRSM and FCAD faculties.

Sophia Chea is a third-year student in the business management program. She will be travelling to Chung-Ang University in Seoul, South Korea next March to complete a semester.

“I chose to go to South Korea as my location because it’s a different experience from what I’m used to here in Canada and it’s also within my budget.”

Chea also said that Ryerson has been providing support throughout her application process.

“I’ve been receiving a lot of support from our faculty advisors and from Ryerson International, so if I had any questions regarding my exchange or about my host university, my first point of contact would be my faculty exchange coordinator,” she said.

“She’s been really supportive and helping me a lot, providing me with information about what to do and how to handle situations with my application process.”

While there are currently no national programs working to increase the number of outbound Canadian students studying abroad, the University of Ottawa and the University of Toronto’s plans could be a reality. Whether they take 10 years or longer, though, is yet to be seen.

“[Exchange is great] if you want to immerse yourself, if you want to just experience something new or try a new education system. And the process is actually much easier than people think it is,” Haggart-Smith said. “But it’s a really fun experience, it’s really amazing, and I highly recommend it to anyone.”