Researchers study cycling in the winter 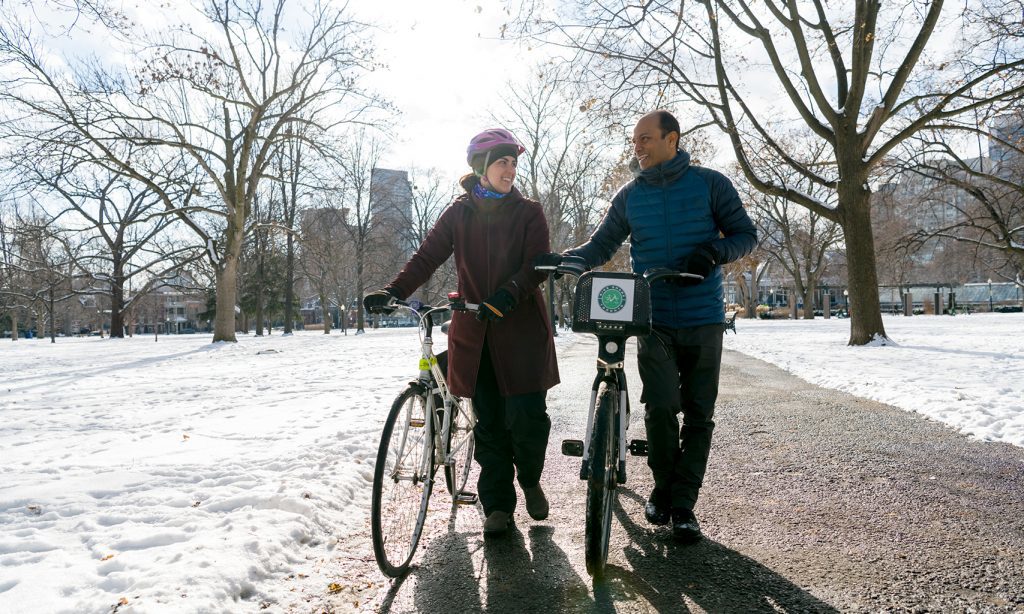 Although it’s cold, snowy and messy, some Torontonians continue to bike from point A to point B, even in the winter.

Ryerson graduate Tamara Nahal is one of those people. She cycled to campus throughout the winter season, despite the conditions.

It took Nahal 30 minutes to cycle to campus when she was a student at Ryerson, and she still continues to bike to work today.

“Our climate is such that we have snowy winters, but I kept biking throughout the year and I found that it was really weather for me – like anecdotally speaking, weather was a big determinant on whether I cycled,” she said. “If I like the weather, I’ll bike in the winter.”

As part of her master’s thesis, Nahal conducted research on factors contributing to winter cycling. She did the study with urban and regional planning professor Raktim Mitra.

The study identified ways to bridge the seasonal gap in cycling rates and was presented to the annual meeting of the Transportation Research Board in Washington, D.C., last month.

“I think winter cycling is discussed a lot but very understudied, and it’s really relevant in the whole discussion of transportation planning in Canada and North America,” said Nahal.

The study combined two surveys that examined staff and students who cycled to Ryerson and determined factors that caused mode shifts from cycling to other forms of transportation in the winter. The dataset included 279 students, staff and faculty.

Mitra said they wanted to challenge the perception that “no one cycles in the winter,” which is a barrier in advancing active transportation planning. This can cause a significant decrease in cycling rates and add to traffic congestion during the winter.

“Oftentimes, cycling is seen as a recreational activity by many and as a result, it’s seen as a transportation option that is perhaps only feasible in good weather conditions,” Mitra said. “We see that there are many cities in the world, particularly in Europe, that have very similar weather conditions but there a lot of people (who) bike throughout the year. So, there is this lack of culture (when it comes to cycling) that needs to be improved.”

Twenty-seven per cent reported biking through the winter.

“I think that’s a high number if you don’t think anyone cycles in the winter. If you never thought about it, that probably seems pretty high,” said Nahal. “But on the other hand, there’s a lot of potential to increase that.”

Among those, women and transit pass holders were less likely to cycle year-round. Students were more likely than faculty and staff members to cycle during the winter, although cycling was more popular among staff (13 per cent) than students (five per cent).

The study found that cycling in the winter was associated with increased access to cycling facilities such as bike lanes and cycle tracks.

“We plotted out the shortest route from each respondent’s home to campus and if there was a high amount of dedicated cycling infrastructure within that shortest route, they were more likely to bike to campus,” said Nahal. “I’m talking about stuff like bike lanes and cycle tracks so things like Sherbourne, Richmond, Adelaide (streets) – that’s dedicated bicycle infrastructure.”

Ryerson on the big stage