Exams are nearly upon us… not that you needed a reminder. And with the little time we have left in the semester to claw our way to a respectable GPA, three priorities are at the top of our collective student consciousness: study, sleep, and eating enough to keep us going.

Planning or packing meals is simply not a reality during exam season, or the regular school season for that matter. So, to make life more convenient, Ryerson students turn to close-to-campus food options.

For some students, the grocery store of choice is Metro. The closest grocer to campus, Metro offers plenty of edible options for students looking for an affordable lunch, snack, or dinner.

But there is a far better, cheaper, and (most importantly) delicious option in close proximity to campus: H Mart.

Located right across the street from Ryerson’s Student Learning Centre (where American Apparel used to be) at 338 Yonge St., H Mart is an Asian grocery store Ryerson students should be flocking to. Some already are, because they know the meal-time offerings at H Mart are far superior than Metro or, God forbid, 7-Eleven.

Originally from New York City, and now based in New Jersey, H Mart first migrated to the Toronto-area in 2013. The Ryerson-adjacent location opened earlier this month, a blessing to students in need of eats that won’t burn a massive hole in their wallet.

But what makes H Mart so superior to Metro?

Well, in many ways, it isn’t. Metro is a massive supermarket, stocking all sorts of things you won’t find in H Mart. H Mart, on the other hand, offers any number of Asian edibles you would never find at Metro.

So to compare the two based on what they offer customers, overall, would be like comparing meatloaf with bibimbap.

To make this comparison a bit more fair, we’ll be sticking to what both H Mart and Metro offer customers looking for a bite to eat. Getting a bit more specific, the two will be compared (taste and price will be the driving points of analysis) based on several food categories. They are: prepared lunches you don’t need to warm up, hot table foods, ramen, and sushi.

Grab-and-go is seemingly the guiding principle behind Metro’s prepared lunch offerings. Calling what Metro offers a “meal” is kind of a stretch, to be fair, since basically everything prepackaged is a sandwich. Not that there’s anything wrong with a sandwich. Priced at $5, Metro’s sandwiches aren’t half bad for the price.

I’m pretty into some of the wraps that they offer. And by “into” I mean “lived off of” for most of the last year. The jerk chicken and Montreal smoked meat varieties are notable favourites. Just beware of the calorie content, because the aforementioned (and delicious) jerk chicken wrap racks up to be above 900 calories. Yeah, yikes.

Metro does win points for its prepackaged salads from the deli bar, offering a bit more variety to prepared meal offerings. The salads are pretty inexpensive, too. The only downside is the offered packaged salads aren’t all that consistent, so what you can grab is never a guarantee.

In terms of sheer variety, H Mart definitely has Metro beat in the prepared lunch department. H Mart actually has meals prepared and the options are astounding. Sweet and sour pork, bento-style lunch boxes, fried rice, Hoe-deopbap and so much more can be picked up in H Mart’s refrigerated meal section. Everything is fairly affordable, costing anywhere from $4-10, depending on the item. 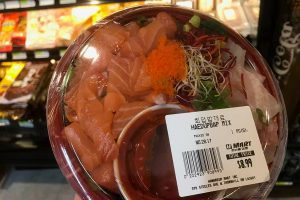 Fresh Hoe-deopbap, sushi and ready-to-go meals are among the few choices you’ll find at H Mart. (Photo by Michael D’Alimonte)

Granted, the amount of options at H Mart is a bit overwhelming. However, being able to get a full meal with rice, dumplings, veggies, and meat for about $7 is hard to ignore.

When walking into H Mart, you really can’t miss the hot food counter right at the front of the store. Korean BBQ bowls, bento meals, and a few “street food” dishes are up for grabs. Everything aside from the street foods is about $10 with tax. Smaller-sized BBQ bowls can also be ordered for about $6.

Admittedly, I haven’t eaten most of the hot table meals offered at H Mart. I did look at what everyone else ordered, and the BBQ bowls look delicious. With fresh vegetables, grilled beef, and a healthy dressing of sauce, the bowl looks like a solid meal for $10.

I can tell you, however, that the glass noodle pancake is delicious. At only $3, the pancake is fried, then sandwiched with an egg and not-too-spicy chili oil. The pancake is a hearty snack that satisfied my hunger for a few solid hours. Plus, it’s something you can’t get anywhere else around campus.

Hot foods at Metro are far more North American. Fried rice, potato wedges, fried chicken, and more can all be purchased. The standard deal is the personal meal combo which is set at $8. There’s also the deli counter serving up salads and cuts of chicken, which isn’t technically “hot” foods, but the meal combo still applies, so we’re looping it into the same category.

Rounding out Metro’s hot table offerings are pizza, soup, and a number of prepared meals that need to be warmed up in a microwave or oven.

Really, the winner of this round depends on what you prefer. I personally think more attention to quality is given at H Mart, but if you’re not into Asian food, it’s a moot point.

A stereotypical student food, ramen is a reality for all too many of us. Cheap, easy to prepare, and transportable practically anywhere — there’s a reason ramen reigns supreme as a meal for students. This is especially true during exams, when time and money are tight.

There isn’t much of a contest here, because H Mart blows Metro out of the water in the ramen department. It’s a little unfair, since H Mart is a dedicated Asian grocery store, but the fact remains, the measly amount of ramen found in Metro’s “Asian foods” aisle doesn’t stack up to the ramen found at H Mart.

Not that Metro carries nothing when it comes to ramen. Metro offers about half a shelf of ramen, all priced at about $1.50. H Mart, on the other hand, has a staggering level of ramen. Seriously, there’s more ramen than you know what to do with, including bowl and package varieties.

What really sets H Mart apart from Metro, however, is one simple customer experience offering: H Mart gives you free hot water for your ramen. It isn’t much, but when you really need that ramen fix satiated, having hot water on hand makes all the difference. 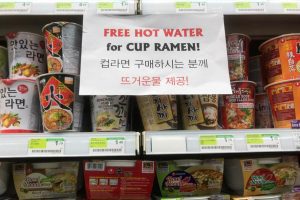 Where should your sushi dollars be spent?

If you’ve eaten sushi at Metro, then you probably already know where this is going. Somewhat expensive, the sushi at Metro always tastes like it’s a day old. The rice is always oddly crunchy and aerated. It makes the $10 price tag all the more unbearable to pay for. The only thing that would ever get me through eating Metro sushi is the mantra, “It’s super convenient, you can eat it right now, just get over it.”

Fortunately, I never need to trick myself into trying to enjoy Metro sushi because H Mart is around. I’m not even going to try to make this a fair comparison, because I can tell you right now, H Mart is the clear winner in this category.

Sushi at H Mart actually tastes like, well, sushi. It doesn’t taste stale, the fish is fresh, and the rolls don’t have that gross imitation crab meat you’ll find at Metro. Price-wise, H Mart sushi is about as expensive as what you’ll get at Metro, if not a bit cheaper. Given the difference in quality, H Mart sushi is a steal.

For anyone looking for something sushi-esque but not wanting to pay anything around $10, check out the kimbap at H Mart. Basically Korean sushi filled with veggies, meat, and egg, all rolled in rice and seaweed, a small pack of kimbap at H Mart goes for $5. A large is $6.50, and can easily be stretched into two meals. Kimbap won’t satiate your sushi cravings if you’re in dire need of some raw fish action, but it’s a great alternative if you want to spend a bit less.

The dust of the battle has cleared and H Mart is the winner, defeating Metro in three of four categories. But take it all with a grain of salt. If you hate Korean and Asian foods, H Mart isn’t a good choice. Metro also has a student discount special which cuts prices down, along with having tons of other food items. Pick whichever grocer fits your taste buds better.

If you’re going to get sushi, then just save yourself a bad experience and head to H Mart.

Every Korean knows that Korea’s former dictator, Chun Doo-Hwan, owns a part of H-Mart, who now lives in America rolling around the slush fund stolen from the citizens, having been “forgiven” for the massive atrocities as “president” of Korea.

Just as a head’s up, of course, but I feel incredibly awful supporting a business of questionable roots, and others should be aware of where their money goes to support.