Ryerson’s School of Performance opened its 2017-18 season with Stephen Guirgis’ The Last Days of Judas Iscariot. The production offered a modern take on the play’s themes of betrayal, love and despair.

Directed by Ryerson alumnus, Dean Gabourie, the play presented the trial of Judas Iscariot, the apostle who betrayed Jesus. The play was comparable to an episode of Law & Order, set in a purgatory courtroom with witnesses ranging from Mother Teresa to Satan herself. 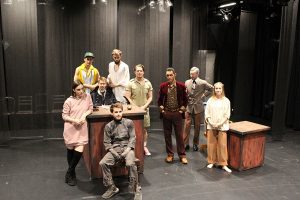 The courtroom prosecution was handled by Yusef El-Fayoumy (Ziad El Khachab), whose ability to land comedic lines with a hint of sleaze shifted wonderfully in the second act. The defence, Fabiana Cunningham (Kate Martin), offered an emotional look at a woman with a painful past. Martin was the understudy for the performance, and while she delivered her lines well, she frequently read from the script binder. This detracted from some moments when a swifter delivery would have had more impact.

The title character, a catatonic Iscariot (Nick Dolan), never left the stage or broke character from the opening of the doors to the curtain call. At first, he  appeared predatory and frightening – his performance in the scene with Satan (Greta Whipple) had a slight “Joker” feel to it. The choice to have Dolan sing several songs before the show and during intermission on his guitar allowed greater insight into an otherwise stiff character. His raspy voice revealed Judas’ pain, despite his few spoken lines throughout the play.

Other standout performances include Henrietta Iscariot (Anastasia Pioro), whose opening monologue, “No mother should have to bury her child”, and subsequent emotional breakdown, were both jarring and near-hysterical. By contrast, Saint Monica (Sydney Herauf) was a breath of comedic air. Her strong New Jersey accent, crude language and emotive acting earned most of the night’s laughs.

The set design was minimal, which worked in favour of the production. Placing Judas on a creaky, rickety chair added tension to his jolting, robotic movements. The single, industrial light bulb on a stand in scenes with Judas and Jesus stood out against the dark set. Lighting and projections were well-handled, especially during the saints’ testimonials. Yet in the courtroom, the use of dark projections and low, monotonous music was sometimes distracting.

Costumes were well done. The choice to place Judas in a tattered mechanic’s jumpsuit, his feet and hands bare and dirty, allowed for an astute biblical reference when Jesus later washes Judas’s feet.

While many retellings of Judas’ fate end in total damnation, this production had a much more open conclusion. Judas was not a black-and-white case. Rather, he fell somewhere in the grey, forgiven by Jesus but condemned by all others.

The play runs three hours long (including intermission) and is playing at the Studio Theatre in the SLC until Thursday, Oct. 26.