Uber is getting some competition this December.

Lyft, a popular U.S. ride-sharing service, plans to expand north of the border in its first international move. The company has chosen Toronto as its first location outside of the United States. 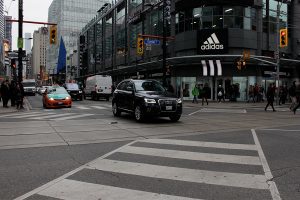 While an exact start date hasn’t been announced, the company stated in a blog post that “Lyft will be around to help ring in the holidays, so if you’re in Toronto, just tap to request — ’cause for the first time in TO, we’ve got your ride.”

Tammy Robbinson, who works in Toronto’s Licensing and Standards department, said that Lyft will follow the same procedures that were set in place for Uber’s arrival.

“It is a very different landscape today than when Uber began operating in Toronto,” Robbinson said. “In 2016, City Council approved a new Vehicle-for-Hire bylaw that created regulations for companies like Lyft. The regulations permit new entrants and the fees were designed to be scalable.”

Lyft’s move comes at a time when the issues surrounding ride sharing have more or less settled. After Uber’s arrival in 2012, there were protests from licensed taxi companies and concerns that they would dodge city bylaws that were enforced on other driving services.

While most of these issues have been resolved, Uber still gains more negative attention than positive. There have been reports of overcharging with their ‘surge’ pricing, allegations of drivers assaulting passengers, and issues around Uber’s management. Lyft, however, has remained fairly inconspicuous throughout their lifetime. The company campaigns on passenger safety and meeting driver’s needs, which has in turn left them with fairly good customer service ratings.

Students at Ryerson look forward to trying out Lyft instead of Uber. Monica Buffa, a third-year human resources student, said that she uses Uber regularly.

“It’s better than having a cab just because it’s more convenient where I can do it off of my phone, and it’s usually a little bit cheaper. I’ve always had good experiences with it,” she said.

Buffa has never had an issue herself, but is aware of problems others have had riding with Uber.

“I have heard a lot of stories. I mean, thank god that nothing’s happened to me, but hearing that (Lyft) has better customer service definitely makes me want to try it even more,” she said.

Keely Vaudrie, a first-year nutrition and food science student, isn’t a frequent ride-share user, but thinks that Lyft coming to Toronto might help with congestion.

“There are so many people going so many places in the city, it’s unbelievable. I’ve come from a really small town and even coming to Toronto and being on the subway at 9 a.m. is insane.

“I don’t think Uber and Lyft can outdo each other. I think there’s just got to be more sources of transport because there’s only going to be more people,” Vaudrie said.

Raktim Mitra, a professor at the school of urban and regional planning, thinks it’s too early to know what impact Lyft will have on traffic in Toronto.

“The way I see it is that our urban areas outside of downtown Toronto would be benefitted by systems like this. It’s the areas that have relatively infrequent transit services,” he said. “In those areas, these car sharing services can actually replace car and transit trips. As a result, they reduce congestion to some extent.”

Traffic congestion has always been an issue in Toronto, and despite recent projects like the King Street Pilot, which aims to reduce wait times for TTC users, it seems like there still isn’t a way to reduce the number of cars on the road.

“Intuitively one might think that – and there are reasons to think that – many of these trips that are being taken on Uber or are using Lyft would otherwise be taken using a transit service,” Mitra said.

“If that is the case, then yes, we are adding more cars to the already congested streets. That might potentially be a problem, but then again we don’t really have any user data at this point and it’s really too early to say whether this service is being used for regular commutes.”