RSSA remembers the Sikh Genocide of 1984

For Ryerson’s Sikh Students’ Association (RSSA), the first week of November reminds them of the year 1984. That was when a massacre of the Sikh population took place in India. Last week, the RSSA held events to honour victims and survivors of the period and to recognize it as a genocide rather than the Indian government’s description of it as a “riot.”

“We want this time to commemorate those people who have lost their lives and once we recognize this existence – because a lot of people deny it even happened – then we can go towards a page of reconciliation,” said Jasakarn Singh Mali, a politics and governance student at Ryerson.

The group has held several events in collaboration with University of Toronto and OCAD. RSSA spent hours on campus handing out hot chocolate and educating people about 1984. They held a movie night, as well as Sakhi (story) night to recount the personal stories of family members. 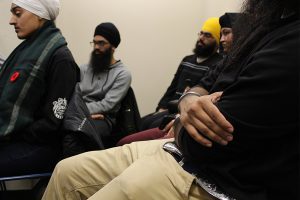 In April of this year, a motion was moved by Ontario MPP Harinder Malhi in the Ontario legislature to recognize the anti-Sikh massacre as a genocide.

In June of 1984, the Indian army stormed the Golden temple, the Sikh faith’s holiest shrine, under the orders of Prime Minister Indira Gandhi. The goal was to crush the Sikh separatist movement for an independent state called Khalistan. The storming of the temple drew international condemnation and resulted in a death toll recorded as 575 people. Yet, Foreign Secretary William Hague from the U.K. suggests the number is much higher.

“You have the Indian government come in and attack one of the holiest temples for the Sikh faith,” said Singh Mali. “You can imagine if the Vatican was attacked by the Italian army. That would be something that’s unacceptable by the entire Catholic population all over the world.”

The attack on the Golden Temple was part of a larger military operation known as Operation Blue Star. Several months later, on Oct. 31, two Sikh bodyguards assassinated Gandhi. This resulted in retaliation. A report by the Human Rights Watch states that Indian government officials encouraged civilians to murder all Sikhs, handed out weapons to crowds, and took part in the violence.

“My dad was there at the Golden Temple. He was 16 years old when it happened. He saw everything happen, and he was one of the very few who actually was able to escape out of that and came as a refugee to Canada,” Japnaam Kaur, a creative industries student at Ryerson, said. 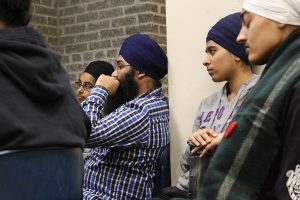 Members of the RSSA recalled personal stories from victims and survivors. (Photo by Hayley Hanks)

“You see a huge population [of Sikhs] within Ontario, within Canada, and the major reason is because of the aftermath of 1984,” said Singh Mali. “So if that had not happened, I wouldn’t be here. It seems like a positive thing but I don’t see that. The people that had died for it – it doesn’t equal to that.”

According to Time Magazine, in three days, nearly 3,000 Sikhs were killed at a rate of one person per minute.

Members of the RSSA believe the Ontario legislature’s recognition of the 1984 events as a genocide helps begin the healing process for survivors.

“To have Jagmeet Singh pushing for this much work for the Canadian government to acknowledge it as a genocide is a great victory for Sikhs,” said Kaur. “We hope that the education of this progresses so more people globally acknowledge and know who Sikhs are – the genocide that occurred – so that we can demystify biases towards anyone to create a more educated and inclusive community.”