RSU takes its alternative budget to a town hall

Toronto’s deep freeze might be over, but the Ryerson Students’ Union’s Freeze the Fees campaign is far from it.

The RSU’s budget, which was released on Tuesday, shows that Ryerson is running on an average surplus of $14 million over the past five years.

In this March 2015 file photo, Ryerson Students’ Union vice-president of education Jesse Root talks at a meeting in the student centre. (Courtesy of Ryersonian Staff)

“We are not in a period of austerity here at Ryerson,” said Jesse Root, the RSU’s vice-president of education.

The students’ union held a town hall meeting Thursday night to get the thoughts of students and faculty about its alternative budget. The RSU says that any extra money should be given back to students as a rebate, and that the exact amount given back per student would be $677.39 if the university was to freeze tuition fees.

Ryerson says the savings that the RSU’s budget found were “wrongly” called a surplus after the document’s release on March 10.

“The university is required to save funds every year in order to be able build its future,” read the statement from Ryerson.

Thursday night’s panel was comprised of people representing the RSU, the Continuing Education Students’ Association of Ryerson (CESAR), CUPE 3904 – the union representing sessional instructors, TAs and GAs at Ryerson – and the two economists who drafted the budget.

Kelly Train, in charge of campaigns at CUPE 3904, reminded students that the union supports the alternative budget because students’ education conditions are CUPE members’ working conditions.

Among the students who approached the microphone to ask questions, there were a lot who supported the budget.

The next step for the RSU is to spread the message about the new budget to the whole school. There were only about 30 people in attendance. Root reiterated this point when he said he doesn’t want any student walking around campus without knowing about the budget.

“Those who are not providing tangible solutions are advocating for the status quo,” he said. “Which is raising tuition fees.” 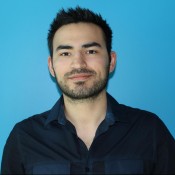 Kevin Alfaro was managing editor live at The Ryersonian. He has interned at Global News and specializes in broadcast and social media.

Kevin graduated from the Ryerson School of Journalism in 2015.

Kevin Alfaro was managing editor live at The Ryersonian. He has interned at Global News and specializes in broadcast and social media. Kevin graduated from the Ryerson School of Journalism in 2015.

MixItMedia aims to take pub crawls to the next level

U of T Sports Conference