The Ryerson Students’ Union’s (RSU) presidential candidates of all three parties say they know election campaigners from other parties illegally pressured students to vote for them, but they each deny their own team is responsible.

“I want everybody to remember that there are still a number of complaints outstanding, and those have to be dealt with before anything’s official,” CRO Amiri Dear told the crowd gathered inside the Ram in the Rye Thursday before election results were announced.

According to election rules, candidates are allowed to tell students to vote for them and inform them where they can vote, but are not permitted to lean in while someone is voting or cast someone’s vote for them.

Dear told the Ryersonian that “it’s essential to the electoral process that all voters feel as if they can vote in anonymity and privacy, just to ensure that they’re free from any undue pressure at any time.”

But candidates from all three slates say that they have proof that the other slates have broken rules.

Rhino presidential candidate Matthew Smith said: “I’ve gotten several messages myself from friends complaining about Unify in particular, and I’ve been passing them all on to the CRO. I know the Rhino party hasn’t been doing it…I’ve been making sure we followed the rules.”

Smith said he received this message:

Anthony Siu, a second-year business management student, said he felt harassed by two people wearing Unify T-shirts. He said he was in the Ted Rogers School of Management when two women approached him, one with a cart of care packages. One of the women said they would only give Siu a care package if he voted for Unify.

“(I) felt very attacked. I said ‘no,’ and ‘no’ once is enough. They are very annoying…I just wanted a care package but didn’t know I had to be harassed for it.”

Ram Ganesh, the president-elect from Unify, said: “We do our best to follow the rules really strictly. We train all of our volunteers. If there are any slip-ups, the CRO finds them and he gives us demerit points.”

Elevate candidate and current RSU president Susanne Nyaga said her team has photo evidence of other slates pressuring votes, but the photos were not made available for the Ryersonian to verify.

“I don’t think it’s right to vote on somebody else’s phone, ever. I would never do that,” Nyaga said. She denied that Elevate pressures students to vote, adding, “It’s not a strategy that we use.”

Dear said the line between campaigning and breaking the rules is easy to identify. “Telling people to vote for you is OK, but all voters must feel that they can vote anonymously.”

Other illegal behaviour includes standing over or too close to a student while they are about to cast a vote, telling them where to click, loaning your personal device to a student to facilitate voting and handling another person’s device.

Candidates of all three slates said they are aware that the consequence of breaking any of the rules, which are outlined by the CRO, is receiving demerit points.

At 10:32 a.m. on Feb. 14, midway through the three-day voting process, Dear posted on the RSU Facebook page reminding students of their voting rights and asking them to report illegal voting behaviour. 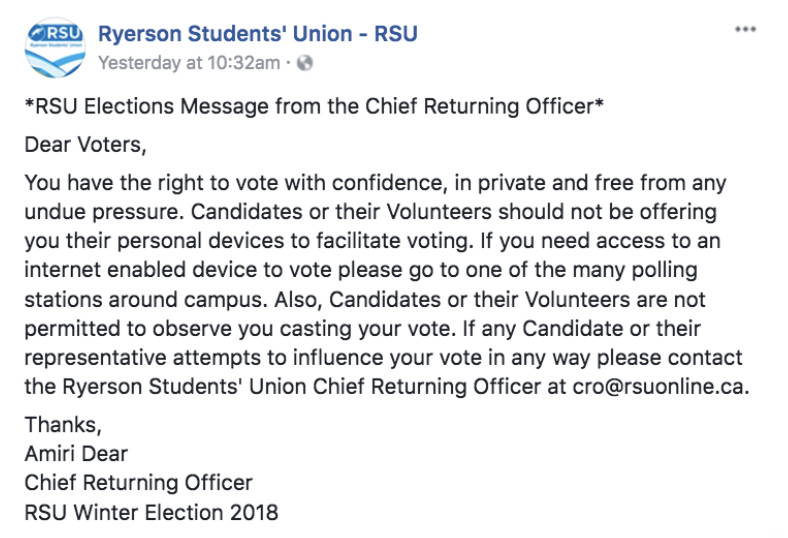 Rams defeat UOIT with a hat trick from Nicholson

Unify was AWFUL with these tactics. They went so far it made me, and im sure others, feel unsafe. I had a campaigner put a phone in my hand, another follow me down a hallway, and finally one blocked from getting into an elevator in the SLC. They should be automatically disqualified for that kind of behaviour!