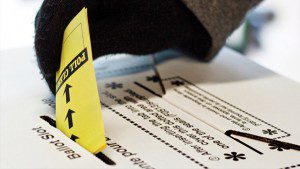 The Ryerson Students’ Union (RSU) is planning to roll out online voting for students’ union elections, perhaps as soon as this fall. RSU president Andrea Bartlett said she hopes to have a system in place before November byelections for three RSU board of directors positions.

Bartlett and vice-president operations Obaid Ullah have been meeting with administration staff in Computing and Communications Services to discuss borrowing the system used for elections to the university’s board of governors and senate, Bartlett told The Ryersonian.

“I met with them in March to open discussions and see how possible it was. There were four meetings in July and August, and Obaid had another one during orientation week,” she said.

“From what I’ve been told, it’s a green light.”

Bartlett said that she sees the byelections as a “test run” for the next general election in spring 2016. The byelections, to be held Nov. 9 to 11, will fill two seats for graduate council and one for a Ted Rogers School of Management (TRSM) representative, after members stepped down for personal reasons.

The university administration said it’s amenable to the idea, but can’t guarantee that everything will be ready for November.

“I can confirm that the university is working to have in place an online voting system for RSU,” public affairs representative Lauren Clegg told The Ryersonian. “At this point we don’t have an exact timeline.”

Bartlett said the main challenge is finding out how to break down the elections by faculty, allowing some students to vote for a TRSM representative and others to vote for graduate council. She said the November date is “ambitious,” but it would “be a good test to see how successful it is and how much it increases voter turnout.”

Voter turnout in RSU elections has generally hovered around 10 per cent, though last year saw an uptick to about 3,600 ballots out of more than 28,000 full-time students. Bartlett said inconvenient voting regulations are part of the problem.
“I saw, last election, how long some of the lineups were,” Bartlett said. “Especially since we’re a commuter school, if students don’t have class on voting days, why would they come downtown?

“What we’re really interested in is making sure you don’t have to go to extremes to vote.”

But previous RSU executives have opposed ditching the paper ballot system, which is increasingly rare amongst Ontarian universities.

Ryerson president Sheldon Levy told The Ryersonian that using the university’s online system “makes great sense,” especially in light of past controversies with RSU elections. There were reports of ballot stuffing during the 2015 vote.

“The online system that is run by the board secretary’s office of the university has proven to be extremely efficient, well received, reliable, all of those things,” he said. “It makes great sense to me, if you wanted — and I’m sure everyone wants, and have always wanted — a fair, transparent, honest, affordable election.”

But Neil Tomlinson, a political science professor who closely follows student politics, said that online voting can open up new possibilities of abuse. He’s concerned that campaigners could walk around with laptops logging people in and casting votes on their behalf, or “look over their shoulders” while they input a choice.

“The upside is the theory that by making it easier for people to vote more people will do it,” he told The Ryersonian.

“(But) when people have to go and cast a ballot the old fashioned way it shows a level of commitment, and there’s a reasonable assurance that it’s being done in private.”

My personal condo crisis: how losing out on an offer helped me find a home

Ryerson Theatre School to find a temporary home in the SLC