“[Fixing] an $800,000 deficit is not going to be a one-year job… It’s not possible, it’s not realistic,” said Ali Yousaf, one of two current directors of the RSU finance committee. He is running for the RSU’s vice-president operations on Spark.

Yousaf apologized for the way the budget was handled last year and said the deficit was caused by the mismanagement of services. He said he knows how to fix this after bringing the Ryerson Engineering Student Society (RESS) out of its deficit. 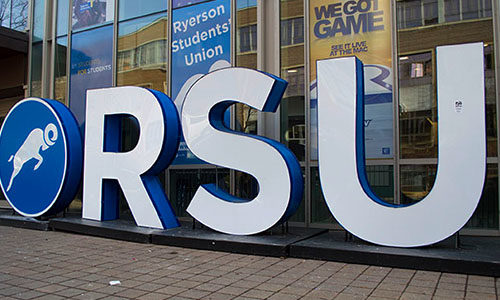 While other candidates for vice-president operations agreed that the deficit would take longer than a year to fix, Stephan Allen said the RSU doesn’t have to spend a lot of money to make students happy.

“One can’t buy happiness. A good event doesn’t have to be a million dollars,” Allen said. He’s a third-year nutrition-and-food student at Ryerson and is running with Elevate for the vice-president of student life and events.

“So if we can find what people want, give them what they want and not break the bank. I feel like that’s probably the best way to go about doing that,” he said.

The slates also discussed issues about accountability, transparency, transportation and student services at the debate.

Most of the parties said they would provide subsidized transportation. Current vice-president of student life and events and Spark’s presidential candidate Harman Singh revealed his slate’s plan for this.

“To those students who wanted cheaper transportation, we’re going to provide that,” Singh said. Singh is running for president of the RSU in Spark.

“Starting from today until the end of the campaign, we’re going to be doing free shuttle rides from Union Station to [the Student Learning Centre (SLC)] everyday, so we can show you we’re not just talk and we’re serious about this,” he said.

The candidates proposed similar ideas to provide accountability. They said monthly meetings, open-office hours and “cafes” with students and student groups would create the communication needed between the RSU and the students.

Many candidates, noting the RSU budget deficit, said the lack of communication between the RSU and students caused problems and dissatisfaction.

“The biggest problem facing students right now is the idea that somehow, these elections don’t affect everybody. Therefore they don’t get involved,” said Noor Gangi, vice-president of corporate relations in RESS. He is running for president as part of the Rhinoceros Party.

“They try not to vote or give a damn, and it does affect them because every single Ryerson student pays for the RSU… People need to be more aware of what’s going on, what the RSU is doing, what it’s doing wrong, and what the people are planning to do in the future,” he said.

“Incredibly, [grants are] in the system of RSU, but it’s not made aware of. Stepping in this position, I want all student groups to know there’s still hope to apply for fundings,” he said.

Among other services, Uddin said he wants to launch workshops that provide financial literacy, self-defence and cooking classes to students.

Many candidates talked about improving the student services, specifically funding for mental health services and improving the Wellness Centre.

Some proposed open-office hours, community meetings and templated budget reports to increase accountability and transparency. Many also stressed the importance of representing the students.

“No matter what the outcome of the elections is, we should not forget that we all go to the same university,” said Mayank Verma, who is running for vice president of operations as part of Ohana.

“We’re sharing the same campus. It’s our responsibility to support each other and stand up for what’s right.”