RSU trains staff to use naloxone after university decides not to

The RSU has equipped its equity service staff with naloxone kits after the Ryerson administration’s decision not to provide them to campus security personnel.

Some equity staff have already been trained at the Sherbourne Health Centre to use the antidote for opiate overdoses. Others will undergo training soon, according to Camryn Harlick, the RSU’s vice-president of equity. 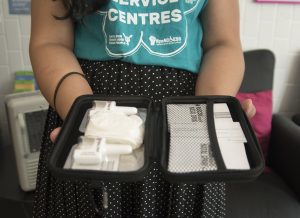 Kim Vaz, of RSU’s Good Food Centre – one of six Equity Service Centres – got trained on how to use the naloxone kit at Sherbourne Health Centre. (Photo by Julie Germansky)

“Ideally, we’re looking to train all the equity service centre staff,” Harlick said. “I think it’s important that we have student staff that are prepared to deal with an overdose if it happens.”

Naloxone counteracts the effects of opioids like fentanyl, which has been found in drugs such as cocaine and MDMA. It comes in the form of an injection or a nasal spray, and can be life-saving if someone is suffering from a serious overdose.

There are no negative effects associated with administering naloxone — even if the person receiving it isn’t overdosing.

Mohamed Lachemi said on Monday that he was unaware of the RSU’s decision. He added that campus security would not carry naloxone kits because of Ryerson’s proximity to the city’s emergency services and St. Michael’s Hospital.

“We are in downtown Toronto and we have lots of organizations that we work very closely with,” he said. “We prefer dealing with the existing facilities and expertise in the city.”

However, Harlick says that campus staff should be prepared to assist in overdose cases either way.