RSU Trans Collective is campaigning to have all-gender bathrooms in the Student Campus Centre (SCC) and Victoria Building by the end of this year.

“An all-gender bathroom is a bathroom where anybody regardless of gender can access the space,” said Star Harwood-Jones, Trans Collective co-ordinator.

Harwood-Jones also goes by the name Markus, and prefers to be referred to as “they,” rather than “he” or “she.”

“I have a beard and I also enjoy wearing makeup,” Harwood-Jones said. “When I’m walking around school in a way that feels authentic to myself and then asked to use a male or female bathroom, I’m being put in an awkward position where I need to expose that I don’t fit into this binary and put myself at risk.”

Harwood-Jones said when they first brought up the idea in 2012, it was controversial. “Some people felt very nervous about all-gender bathrooms on campus, mostly for reasons around safety,” they said. And while Harwood-Jones respects those feelings, they added, “Trans people deserve to feel safe as well.”

But Harwood-Jones says that was a few years ago, and that student support has been growing. 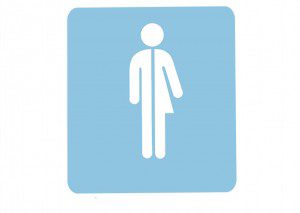 “I think it’s sad that we need to seriously campaign for issues like these,” said Jenny Lu, a first-year business management student.

She said she understands why people would be hesitant to these changes, but thinks the community should try to find a compromise.

“We should be more sympathetic to this cause because we are an inclusive university,” she added.

Until all-gender bathrooms are made available, the Trans Collective has listed fully accessible and partially accessible single-stall bathrooms as an alternative, as they are open to all genders.

For now, the campaign is focusing on the SCC and the Victoria Building. Harwood-Jones said this is because they are two of the most heavily trafficked and shared buildings on campus. The SCC doesn’t have any single-stall bathrooms either.

“If a trans person or anybody who doesn’t want to use a male or female bathroom wants to use the bathroom at the SCC, they would have to leave the building,” said Harwood-Jones.

Right now the Trans Collective isn’t lobbying for building new bathrooms, but instead hopes the university will convert some of the existing single-gender bathrooms to all-gender bathrooms.

A Ryerson spokesperson said only that the university is reviewing its policy for campus bathroom signage.

In an email, Kerri Bailey, manager of finance and strategic planning for campus facilities and sustainability, said: “Once that’s been approved, and priorities have been set for implementation, campus facilities will move forward to make those recommendations a reality.”

Harwood-Jones said the Trans Collective now likely won’t meet its target date for establishing the campus’s first all-gender bathrooms. “We were hopeful to have these bathrooms converted by the end of this year. It looks like that is being put on a hold for a little while.”

Harwood-Jones said that once the university is on board, the entire campus could be converted in three to five years.

RSU Trans Collective’s long term goal is to have an equal number of all-gender, male and female bathrooms across campus. It hopes to have a commitment from the university by fall of this year.

RSU Trans Collective was established in fall of 2014 and aims to create an inclusive campus for the trans community by addressing issues of transphobia, cissexism, transmisogyny and binarism at Ryerson.