RSU: We need another month, at least, to reimburse 6 fest tickets

The Ryerson Students’ Union is asking some students to wait another month or more before they see refunds from their concert last fall.

At the latest RSU board meeting, Harman Singh, vice president of student life and events, vowed again that all students who issue a request for refund will get their money back from the 6 Fest concert, but he’s asking for still more time. 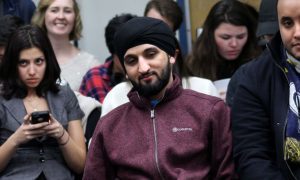 Harman Singh, VP of student life and events, at the Ryerson Students’ Union board of directors’ meeting on Feb. 3, 2017. (Ryersonian file photo)

Approximately $80,000 was put into Singh’s  personal account so that he could distribute the funds to students.

He  has been refunding tickets to students one-by-one after the October concert was rescheduled, disappointing many students.

In the meeting, Singh was questioned repeatedly about the refunds again.

Abisola Asha, a representative from the faculty of community services, said she doesn’t know what to tell students when they confront her about their money. She said people ask her when they’re going to be refunded.

Asha said students should get an apology for the whole ordeal.

Singh did not provide an official date for a reimbursement deadline even though board members pressed for it at the meeting.

The original $80,000 has been given out already, according to RSU President Obaid Ullah. “Proof has personally been given out to the financial control of the RSU,” he said.

Singh said he’s willing to use approximately $1,000 of his own money to reimburse students, as he has almost run out of provided funds.  The lack of funds could be a result of the transaction fees that come with e-transfers, he said.

As a response, board members voted to change how the money is distributed, opting for cheques rather than e-transfers. 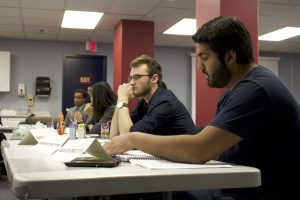 Obaid Ullah at the board of directors meeting last week. (Yasmin Arnaout/Ryersonian Staff)

According to Singh, the RSU is still reviewing the fund screenshots one by one.

The board also discussed the potential production of a report on the 6 Fest funds, but the meeting exceeded its allotted time before a decision could be reached.

“Until refunds are done we don’t want to issue a full report,” Ullah said.

At one point, the meeting was moved to another room, but it lost quorum during the shuffle.

Board members also reinstated several directors after some had their spots vacated for poor attendance at meetings.

Other highlights of the meeting:

From blue and gold to red and white