A group of five Ryerson women are trying to encourage students to speak up and support each other about consent.

Glass Ceiling Productions, formed by the fourth-year RTA School of Media students, is currently working on a film about consent in young relationships. The movie, called The Remnants of Eden, tackles an important and sensitive issue. 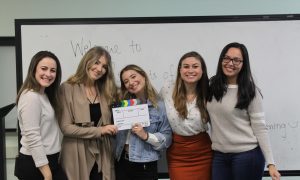 “Sexual consent is still important within a relationship,” said marketing and casting director Amanda Mastantuono. “Just because you are in a relationship doesn’t mean you say yes.”

The Remnants of Eden is a coming-of-age story of a teenage girl, Eden Rosen, who experiences a traumatic situation when her first love becomes her greatest fear. With  the help of friends and family, Rosen’s spirits begin to recover, but the remnants of her past still remain.

Through the film, Glass Ceiling Productions’ goal is to start a conversation about sexual assault and abuse, not only for women but for men as well.

“As (a) full team of women this is also a shout out to all the men in the world,” said director and story editor Trish Riswick. “This is your problem too and it’s a conversation that they (men) need to have.”

Riswick and Mastantuono, along with creative director Holly O’Brien, co-producer and financial lead Sydney Weinstock, and co-producer and production co-ordinator Sloane Lester, seek to empower women to speak up and share their confidence with the rest of their peers.

“In this industry it’s really hard for girls, and we are five brilliant, beautiful and confident girls who love what we do,” Riswick said. “We want to drive home that point that we are a group of five women telling this story for women.”

Their project began during their third year and will première within the first few months of 2018. With the help of friends and family, the team was able to raise its target amount of $5,000 in nine days through crowdfunding.