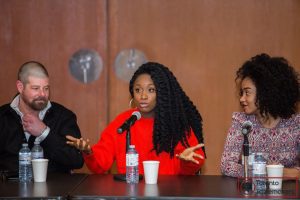 Growing up in Rexdale, in the urban west-end of the city, Kwaku Agyemang immersed himself in different programs that broadened his interests in the film industry. Those programs were mostly facilitated by black people, or people of colour.

“I’d always just happen to be around black excellence [type of] people, people that were black or coloured, it just was inspiring for me,” Agyemang said.

However, when he enrolled to be a media production student at Ryerson, the sight of industry leaders of colour tremendously diminished.

After years of having predominantly white facilitators, professors, and of attending panels with mainly white industry professionals, Agyemang decided to make his own panel. 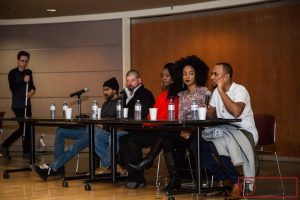 The third-year student teamed up with fourth-year media production student Samuel Adebisi and launched their own promotions company, called Toronto Tastemakers, last October. They intend to organize and potentially host a series of various events aimed at students interested in film and entertainment.

“Since I’m more into event producing and hosting events, I thought, ‘why don’t we just put on our own film and entertainment industry panel,’” said Agyemang.

Producing their own panel was the first step in creating their inaugural event, and having people of colour as panelists was their number one priority.

“I made sure that the panellists were people that represented those that are misrepresented in the industry,” said Agyemang.

“Seeing panellists like this, different, diverse group of people that look like them from a young age shows [students] ‘I can do this, it’s possible,’” said Adebisi. “Just seeing predominantly Caucasian people there, there’s an immediate disconnect.”

Agyemang and Adebisi’s faculty supported the event and permitted them to put up posters around the campus. However, any financial support came from the two organizers’ own pockets. 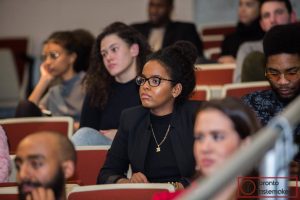 In March of 2016, the RTA School of Media put on a panel titled Diversity in Radio. The panel discussed whether diversity is good for business in Toronto. The four featured panellists included Wendy Cukier, vice-president, research and innovation at Ryerson; Nick Davis and Susan Marjetti of CBC Radio; and Fitzroy Gordon, president and CEO at G98.7 FM. Out of all these panellists, the only person of colour was Gordon.

In October 2017, Enakshi Dua, an associate professor in gender, sexuality and women’s studies at York University, told the Globe and Mail, “[Minority] students don’t get the mentorship to encourage them to go beyond an undergraduate level, why don’t they go on? Because they don’t see themselves reflected.”

“We shouldn’t wait for people to determine what we do next,” said Agyemang.

The Toronto Tastemaker panel was hosted at the YMCA on Grosvenor and Yonge streets. About 60 people were packed into the second-floor auditorium. The panellists answered a series of questions about the industry, moderated by Agyeman, and concluded by inviting the attendees to approach the guest speakers with their own questions.

Panellist Amanda Parris noted that it was up to the schools to do more work in making representation a priority in their environments.

“When institutions don’t do the work to create opportunities for students to see people that look like them, and reflect them, and also reflect different ideas from them, then it’s a sign of institutional laziness,” said Parris. 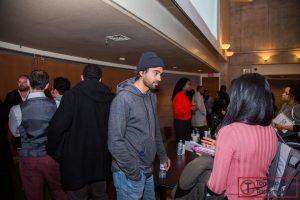 Meanwhile, Charles Falzon, dean of Ryerson’s Faculty of Communication and Design, acknowledged the desperate need for the faculty to take on their roles in encouraging such representation.

“I think it’s great. It’s exactly the type of action that is needed in every aspect of what we’re doing here — to have people, whether its in panels and in teaching roles and in production roles, represent the breadth of our society. We still need to do more,” said Falzon.

Agyeman and Adebisi hope to put on more events that represent people of colour, so students who don’t see themselves reflected will still have aspirations to thrive in the industry.

“We want to really just go ham and do big events. We just want to focus on cultivating the community, move into becoming a hub or network for what’s going in the industry for coloured people in Toronto,” said Agyeman.