The unique film focuses on a Toronto-based cross-dressing boutique (owned by fellow Ryerson alumna Paddy Aldridge) which offers an inclusive “transformative” experience to people from all walks of life.

“The win is amazing,” said Rideout in an email to the Ryersonian. “To me, it says that audiences want to hear stories from voices that have not always had a space in the traditional media. I think the time is now to support these stories.” 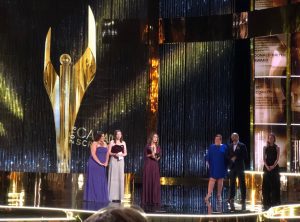 Rideout mentioned that this is the first film she received major funding for, via Bell Media’s BravoFACTUAL grant.

“I could not have made this film without this financial support,” she added. “I think if we want to cultivate an environment in this country where diverse filmmakers can bring their stories to an audience we need to continually look at how we are funding films and who is receiving funding.”

The filmmaker thanks her entire cast and crew for Take a Walk on the Wildside’s success and, in particular, co-producer Sasha Fisher (an RTA grad) and of course, Aldridge, whose “humour and passion” made her a veritable “powerhouse” behind the production.

Take a Walk on the Wildside will be released on CBC’s Digital Documentary platform in the coming weeks, so be sure to check it out and support the success of RU alumni.