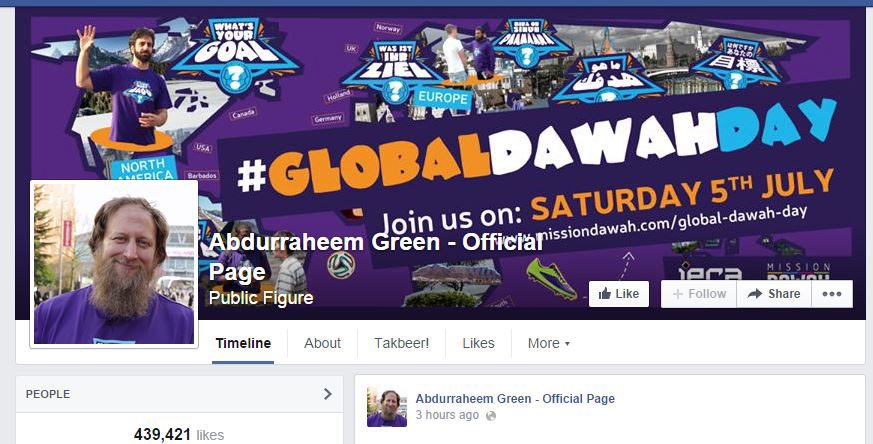 Abdurraheem Green’s Facebook page. Green, an alleged “extremist,” was scheduled to speak at Ryerson on Thursday, but organizers have since said Green will no longer be appearing. (Abdurraheem Green/Facebook)

A heavy beard lines the speaker’s face. It blurs his jawline. It hides his features. It obscures his whiteness. In the room full of unshaven Arabs, Africans and south Asians, the Caucasian man almost blends in — but just barely. He says a few choice Arabic phrases — with careful enunciation, saying “Allah” the same way a native speaker would — but reverts quickly to English in his standard British accent.

“If practised properly, polygamy is a blessing for the woman,” he said in a taped talk.

Abdurraheem Green, a convert, is a controversial Muslim speaker. According to media reports, his sometimes radical opinions have led him to be barred from speaking engagements, a flight and even a soccer stadium.

And he almost came to Ryerson.

Last Thursday, the Muslim Students’ Association invited more than 500 people to a course on proselytizing Islam — how to speak “convincingly” and in a “structured way” — with Green scheduled to speak. But Green’s appearance was mysteriously cancelled after former Muslims derided the choice of speaker. There was no prior public notice, no explanations — only a same-day Facebook post that pointed to “unforeseen reasons.”

The association declined comment several times. Green did not respond to requests for comment. Neither did the Ex-Muslims of North America, the group that spoke out against Green’s appearance, which said in a news release on Wednesday Green is an “extremist” and creates an “atmosphere of intolerance.”

Green, however, did respond to the former Muslims’ accusations. In a public statement on his website, Green acknowledged the allegations and apologized, saying, “There are beliefs that I have held that I have realized were completely either wrong, or sometimes misplaced.”

“My being British (does not) contradict my being a Muslim,” he added. 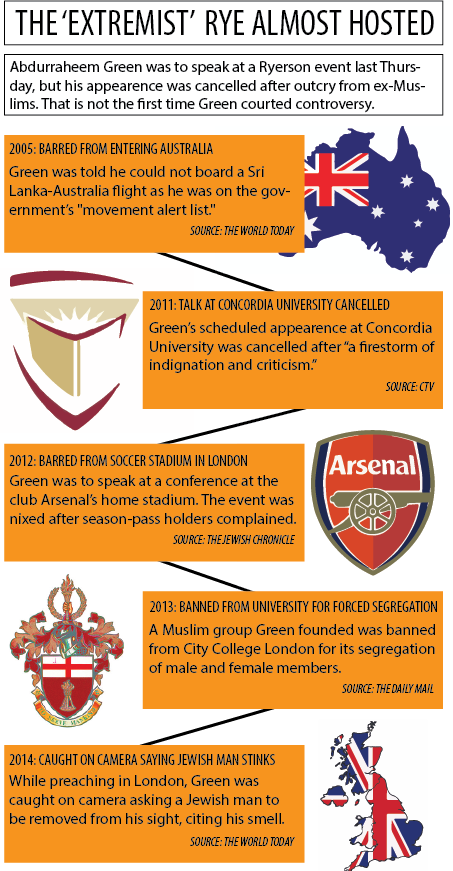 According to the Indonesia publication Republika, Green was born the son of a colonial administrator in the then-British empire with the birth name of “Anthony.” He went to a top boarding school and an all-boys preparatory college — where he lived with Catholic monks — before studying at the University of London.

He was also born a Roman Catholic, but his faith was shaky.

When he was nine, Green’s mother tried to teach him the Catholic prayer Hail Mary, which begins with, “Hail Mary, mother of God,” and that made him “very uncomfortable.”

“I then asked myself, ‘How can God have a mother?'” he told the Republika.

It didn’t make sense to him. God in Green’s mind is a supreme being — the Alpha and the Omega, without beginning or end.

“If Mary is the mother of God, then Mary must be better than the Lord Jesus,” Green said.

The concept of the confession also perplexed Green. Why does should he confess his sins to a priest, and not God directly? What if the priest does not relay the sins to God properly?

Green felt his faith was “in trouble.”

So was the British empire then — ceding lands, losing wars. As the empire headed toward complete dissolution, so did the belief Green had in his Catholic faith.

Green’s father soon left his job as a colonial administrator and went to head the band Barclays in Egypt, where Green would spend his school holidays for a full decade.

Green adopted Buddhism for a while, though he never fully practised.

Green found it a paradox. In his mind, the divinity of Jesus — what Catholics believe in — directly contradicts his death on the cross, as mentioned in the Bible.

“A meeting with the youth in Egypt was a turning point in my life,” Green said.

It was not long before Green bought a Koran. He read it daily, absorbing its teachings before he even started identifying as a Muslim.

Soon after, in an undated account Green gave to the Republika, he walked into an Islamic bookstore, and a man asked him about his faith.

“Yes, I testify there is no God but Allah and Muhammad is his messenger,” was Green’s reply.

Green’s faith then grew stronger, and according to critics, also more radical.

He publicly endorsed polygamy, religious intolerance and homophobia, and his travels and speaking engagements were dogged by public outcry. (See infographic for more information.)

Ryerson is not the first Canadian university in which an event related to Green was cancelled.

In 2011, CTV reported that iERA members were scheduled to speak at the “Calling the World Back to Allah” conference at Concordia University,  but student organizers withdrew their invitation after a “a firestorm of indignation and criticism.”

“Once we evaluated the benefit this could have on students and the potential media outcry from the controversy of the speakers we found that it wasn’t in the best interest…to hold such an event,” a representative told CTV.

While officials from the university then said they had no role in the matter, it is unclear if the cancellation of Green’s Ryerson appearance was under similar circumstances. Ryerson’s administration and security services did not respond to requests for comment.

Toronto police said simply having expressed radical opinions is not against the law and the issue is not a law enforcement matter.

It is unclear when Green first started taking the moderate stance he says he currently holds. While videos of him after 2012 generally shy away from controversial topics, allegations of anti-Semitism surfaced as early as June this year.

In an undated video, Green was seen preaching at London’s Hyde Park, complaining about the supposed smell of a Jewish man.

“Why don’t you take the Yahoudi (Jew) over there, far away so his stench doesn’t disturb us?” he was reportedly heard saying. 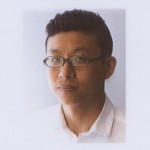 150 years of war photography at the Ryerson Image Centre