Ryerson Athletics is reviewing its grade monitoring process among student athletes after the men’s soccer team was penalized for academic ineligibility by the Ontario University Athletics and U Sports.

An unnamed player failed to meet academic requirements back in September, forcing the team to forfeit its first six games. Had the wins stood, the team would have been in fourth place overall in the country.

“We are in the process of reviewing our systems and processes,” said Ivan Joseph, director of Ryerson athletics. “We are going to do a thorough, deep dive into seeing exactly where this was broken, and we are going to put some steps into place.”

Rams men’s soccer head coach Filip Prostran said the team is doing what it can to avoid situations like this in the future.

Athletics will continue to tweak the system’s checks and balances to ensure nothing flies under radar.

According to the chief operating officer of U Sports, David Goldstein, each university is required to confirm the eligibility of its student-athletes before and during the season. He added, “beyond that, each university has autonomy over its internal processes.” 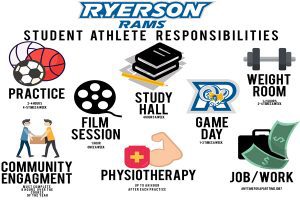 A list of student-athlete responsibilities. (Graphic by Max Ciarmela/Ryersonian)

Currently, Ryerson Athletics has many checks and balances to ensure they are on top of athlete’s eligibility. All varsity athletes are told of their responsibilities as students during an academic orientation at the beginning of the school year.

Each athlete must enrol in the prerequisite number of hours (six classes or 18 credit hours). Any first-year athlete or student who has a GPA below 2.67 must complete four hours a week in study hall to be able to dress and play for their team on game day.

If an athlete is below a 1.67 GPA they are on probation and ineligible to play. Players must show that they are making serious efforts to get their marks above that point to get back on the team.

During Joseph’s time at Ryerson, many changes have been made to improve the monitoring of student athletes grades and help them stay organized. In 2015, all varsity athletes started using a Ryerson Athletics Mobile App.

At the beginning of each semester all student athletes must input the syllabus for each of their courses with the grade breakdown. It is expected that once an athlete gets their marks back they input it into the app so the athletic administration can see it and provide feedback.

In addition to helping athletics track marks, the app also acts as a tool for student athletes. It helps them track engagement hours, set up a physical therapy appointment, a study session or tutoring session.

“I’m pretty lucky to come to Ryerson at a time where the athletics program was really starting to develop and grow and become more high performance, and recognized within Ontario and Canada,” said Haroula Giovanopoulos, a fifth-year nutrition student and setter for the Rams women’s volleyball team.

Athletes also have to participate in community engagement. U Sports athletes on a Ryerson varsity team have to complete eight hours throughout the year as well as one team initiative.

“There is not a lot of room for procrastination as a student athlete,” Giovanopoulos said. “You never know when the practice schedule will change, so you really need to stay on top of all your work to make sure you are meeting those deadlines and stay eligible.”

Jean-Victor Mukama has been with the Rams basketball team since 2013. Academic troubles kept him off the roster during the 2016-2017 season.

“As soon as I saw the exam results came in, I knew that if I didn’t pass all the classes I took for the next semester, I wasn’t going to be eligible to play,” said Mukama, who was named the OUA

East rookie of the year in 2013. “It was a decision to say, take this year and take it serious, otherwise I’m not even going to be in school anymore.”

During the season he missed, Mukama participated in select practices. His experience in high pressure games and understanding of the eligibility process allowed him to speak his wisdom to the younger teammates.

“Over the years, I’ve had to learn how to really use my time management really well,” Mukama said. “It’s not possible, especially as a first year, to just wing it and leave things to the last minute. Because if you do, you are going to see things start to get worse either in basketball or academically.”

This is the first time a Ryerson team had to forfeit games due to academic ineligibility since Joseph took over as director in 2008. Joseph acknowledges that mistakes were made.

“Clearly it did slip through the cracks… If we had done our job right here, he wouldn’t get to play.”

EDITORIAL: Consent culture must be priority