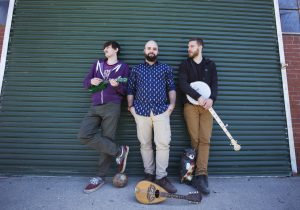 Throughout high school theatre classes and Ryerson University’s radio and television program, there was one thing that Craig Scorgie could not stop doing — laughing.

Now he continues the laughs with his new sketch comedy trio Good Game, performing at this year’s Toronto Sketch Comedy Festival on March 8.

The trio consists of Scorgie, Nick Chenosky and David Horn.

They were born and raised in London, Ont. and met in their high school drama class in 2006.

They made their debut in 2008 at the London Fringe Festival.

With access and support from fringe festivals across the country, Scorgie and his partners have been able to perfect their craft and had the opportunity to bring Good Game to New York City’s Comedy Sketch Festival in October of last year.

“There was about five or seven of us at first but then a lot of people left when they realized how serious we were about it,” he says.

Regardless, Scorgie believes three is the perfect number.

“When you have three, it’s easier to find a joke that we all love,” he says. “We know it’s a good idea when we all laugh.”

When discussing their style of comedy and what distinguishes them from other sketch groups, Scorgie says that their jokes fall under absurdity more often than not.

“We do a lot of small and big sketches, as well as some monologues, dialogues and trialogues,” Scorgie says.

For example, a sketch that he and his partners used to do was of two neighbours having a conversation over the fence about one of them having a snake pit in their backyard.

“We try to stray away from straight characters and rather create unique characters that no one has ever seen before,” Scorgie says.

He admits that a lot of their material comes from just hanging out with Chenosky and Horn, as well as doing a bit of improv with other friends.

One of the reasons Scorgie fell in love with comedy is the ability it gives him to create an immediate connection with a crowd.

“There’s this certain instant gratification when you do comedy that I just love so much,” Scorgie says. “Compared to doing theatre, in comedy you can actually get a crowd reaction that indicates whether or not you’re doing a good job.”

When Scorgie is not performing with Good Game, he is producing, shooting and editing videos for various clients. With the experience he has gotten from creating visual content and studying at Ryerson, Scorgie plans to hopefully bring both worlds together and produce a show online.

Aside from performing at this year’s Toronto Sketch Comedy Festival, Scorgie and Good Game will be touring a new show called Gung Ho and performing it at several fringe festivals across the country.

RSU: We need another month, at least, to reimburse 6 fest tickets