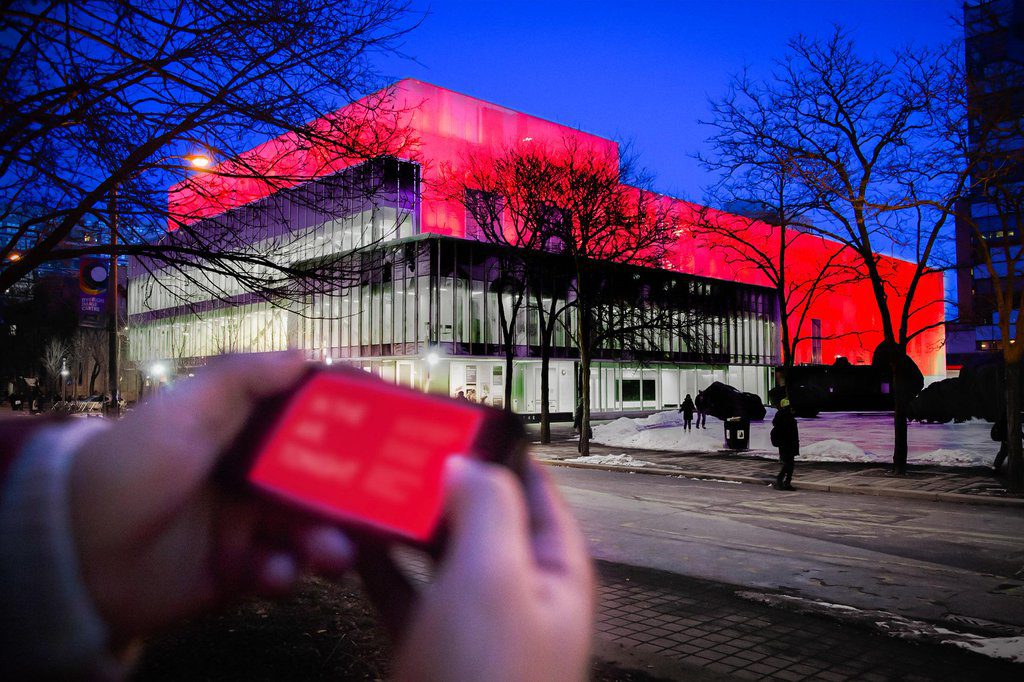 In the Air, Tonight, a program to raise awareness about homelessness, has fallen short of its first ever fundraising goal of $1,000.

Throughout the month of February, the Image Arts Centre was aglow with multicolored lights at night.

In the Air, Tonight was a program created by two Ryerson grads, David Colangelo and Patricio Davilla. Through the program, the lights respond to real-time local wind conditions and tweets that include the hashtag #homelessness.

The display was part of a project that sparks a larger discussion on the topic homelessness in Toronto.

It’s the third year that Colangelo and Davilla have run the program. It was a month-long interactive architecture installation and this year, it ran from Feb. 5 to March 5.

“Every year we pick an initiative related to homelessness to promote,” Deangelo said. “This year is the first year we decided to actively ask for donations.”

Through generosity.com, a crowdfunding website, In the Air, Tonight raised money for the STAR Learning Centre. A part of St. Michael’s Hospital’s mental health and addictions service, the STAR Learning Centre supports people who are making their transition into housing and work through free classes such as making a resume or skills training.

In the past, In the Air, Tonight has also highlighted other issues, such as health, youth and the LGBTQ community.

Monday was the last day of the installation and Colangelo and Davilla were just shy of their $1,000 goal.

“Raising money was experimental for us this year, but we’re happy with what we’ve accomplished so far,” Colangelo said.

Colangelo said the installation has been a pilot project for a program he hopes to implement with Ryerson.

“I’ve been in talks with the school to start a program for students to use the lights for community engagement.”

Michael Forbes, Ryerson’s interim group director of communications, said they Ryerson is in the early stages of developing this program.

He has been looking at buildings like the CN tower, Calgary Tower and Empire State Building to see their rules and protocol with their lighting displays.

“Right now it’s about working out the details,” Forbes said. “For example, what to do if a two students wants to book the lighting display at the same time.”

According to Forbes, they again are hoping to get a program for students up and running in the next year. He said it would be free for students to use.